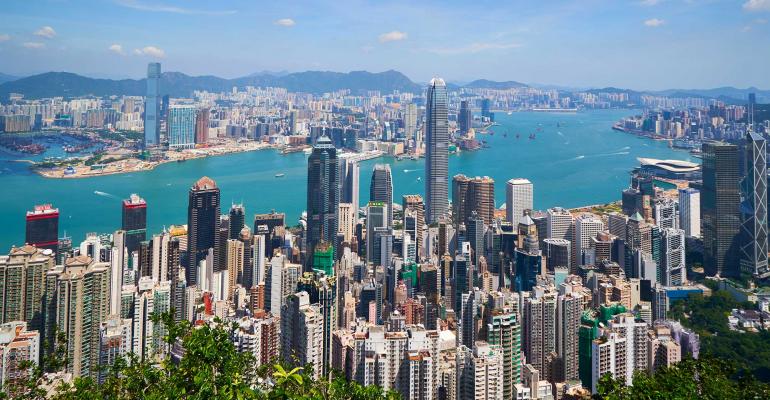 Companies had to promise not to reduce headcount below a pledge number, and use all the proceeds to pay salaries.

(Bloomberg) -- Hong Kong’s property tycoons and global firms including Ernst & Young and Jones Lang LaSalle Inc. have received tens of millions of dollars in government-funded wage subsidies meant to protect jobs that would have otherwise been lost during the coronavirus pandemic.

While the companies are entitled to claim the subsidies, the payments to developers controlled by billionaire tycoons and financial firms employing highly-paid professionals have raised concerns about the fairness of the program. White-collar jobs have largely stayed intact during the crisis, with the brunt of the city’s recession falling heavily on low-skilled and low-paid workers in the construction, retail and food industries.

To receive the subsidies, companies just had to promise not to reduce headcount below a pledge number, and use all the proceeds to pay salaries. That stands in contrast to wage subsidy programs in other countries like Australia, where firms had to show a steep drop in revenue to qualify. In the U.S., companies including burger chain Shake Shack Inc. returned funds after facing a backlash for tapping a program to support small businesses.

“This is very infuriating, the government turns a blind eye and doesn’t introduce any unemployment benefits to many jobless workers who have trouble even surviving,” said Mung Siu Tat, chief executive at the Hong Kong Confederation of Trade Unions. “But it continues to transfer benefits to big, powerful conglomerates with handsome profits.”

Among companies receiving subsidies in the first tranche of the HK$80 billion ($10 billion) program were Victor Li’s CK Asset Holdings Ltd., which got at least HK$22 million, and the billionaire Cheng family’s New World Development Co., which received HK$56 million via its property arms to cover salaries between June and August, according to government data compiled by Bloomberg.

CK Asset and New World were named by the Hong Kong Retailer Management Association as two of the five most uncooperative landlords in providing rental concessions to struggling tenants in April during the second coronavirus outbreak.

CK Asset and Henderson Land didn’t respond to multiple calls and emails requesting comment. JLL said various industries including real estate had been affected by Covid-19 and the program would help ensure the sustainability of businesses in Hong Kong.

New World Development said it hadn’t applied for the program, but its affiliated companies had done so based on their own operational needs and all subsidies were directed to employees, particularly front-line staff, construction workers and bus drivers.

Hong Kong’s big property companies have suffered losses, their latest earnings show. Wharf Real Estate Investment Co.’s retail rental income slumped by almost a third in the first half of the year, leading to a loss and a HK$7.4 billion hit to its portfolio. Revenue from Hong Kong property sales at CK Asset plunged by more than 60%.

Even so, seven of Hong Kong’s real estate tycoons sit atop a combined fortune of $120 billion, according to the Bloomberg Billionaires Index.

Hongkong Land Holdings Ltd., Central’s biggest landlord, obtained HK$22 million through the program. The company decided to participate after “a thorough review,” it said in a statement. It pledged to maintain headcount of at least 830 employees and launch a HK$100 million relief fund to help people most affected by the pandemic.

The government handouts are based on 50% of actual wages, with a cap of HK$9,000 per employee each month.

The coronavirus pandemic, coming after months of social unrest, has exposed the cracks in Hong Kong’s economy. The city, one of the most expensive and unequal in the world, has little in the way of welfare. The most direct financial assistance Hong Kong workers have received during the pandemic was a one-time HK$10,000 cash handout to all residents 18 and above.

Job losses have largely been concentrated in low-skilled labor as the virus shutdowns and travel restrictions smash the economy. Unemployment in retail, accommodation and food services has more than doubled in the past year, climbing to 10.8% in July. The construction industry has the highest proportion of workers -- 11.3% -- out of a job. Most of the developer subsidiaries that applied for subsidies don’t specifically employ construction workers, except one entity owned by New World.

To be sure, other countries have hit snags with their financial assistance programs. In the U.S., more than a dozen publicly traded companies with revenue of more than $100 million, including Shake Shack and Potbelly Corp. received loans through a relief program aimed at small businesses.

In the ensuing controversy, Shake Shack returned its $10 million loan to the government. The L.A. Lakers, one of the NBA’s most-profitable franchises, returned a $4.6 million loan they received under the Paycheck Protection Program, ESPN reported in April.

In Singapore, Citigroup Inc. returned job support funds it received from the government on its own will, local media reported.

In a statement, Ernst & Young said the wage subsidies were “a vital measure to ensure the employment and livelihood of the people of Hong Kong” and it supported the program “as a measure to safeguard the well-being of our people as well as to help boost our employees’ confidence and team morale.”

The amount Ernst & Young received averaged almost HK$26,000 per worker over the three-month period, while the fast-food chain Cafe de Coral got about HK$18,000 for mostly low-paid cashiers, cooks and kitchen hands.

Hong Kong-based Bank of East Asia Ltd., which got HK$114.8 million, said it applied for the subsidies to support the government’s initiative to protect jobs and “to contribute positively toward the recovery of the Hong Kong economy.”

Deacons, which received more than HK$18 million, has “taken measures to protect our staff from the impact that the global pandemic has had on businesses,” the firm said in a statement. “The Employment Support Scheme has enabled us to ensure that our staff across the business, including professional, business support and trainees, are protected.”

Both companies said they used the money to pay wages.

Apart from the no-means-test approach, the subsidy program has drawn criticism as employees don’t necessarily get all the benefits. There have been cases where employers -- many of them large restaurant chains -- have cut wages or given staff fewer hours even after obtaining the subsidy, according to Mung. The union has received 216 complaints from workers for reasons including being fired or ordered to take unpaid leave despite their employers getting the aid.

In response to the backlash, the government has vowed to boost deterrence against companies from significantly laying off employees in the second tranche of the program. The application for the next tranche opened last week.

The second tranche of the program received applications from more than 121,000 employers as of Friday, Ming Pao reported.

Notably absent from the list of firms receiving subsidies were the major Wall Street and European banks.

“They realize they are in the firing line and need to show the public they are behaving as good corporate citizens,” said Paul Smith, a former global president of the CFA Institute, the global association of investment professionals. “How companies behave in the pandemic will affect their brand value in years to come. Companies that appear greedy and accept government money when they don’t need to will be damaged.”

--With assistance from Chloe Whiteaker.