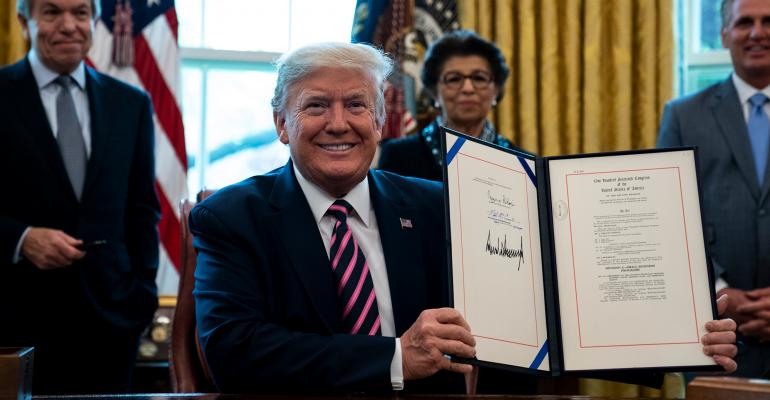 While most Americans are aware of the rescue, few know where the money is landing and what impact it’s having.

(Bloomberg Opinion) -- Last week, the Government Accountability Office issued the first comprehensive analysis of how trillions of dollars of taxpayer money is being spent to protect Americans, the economy and public services from the ravages of Covid-19. Its broad conclusions aren’t reassuring.

The report paints a picture of a federal government that is managing a gargantuan effort, at best, haphazardly. The government is either unable or reluctant to provide enough data and financial information to put clothing on what this $2.7 trillion effort truly looks like — and whether the funds are being deployed in a broadly successful way.

We’re fortunate to have the GAO at this moment because other watchdog groups meant to keep an eye on the biggest bailout in U.S. history — particularly an inspector general appointed by the president and a special bipartisan committee set up by Congress —  haven’t produced any robust public assessments. That leaves the door open to possible abuses. For example, as the Washington Post reported on Friday, the White House has made it easier for government insiders to obtain bailout loans from the Small Business Administration, creating a raft of conflicts of interest.

While most Americans are aware that the federal government has undertaken this rescue, few know where the money is landing and what impact it’s having because details have been scarce.

As we wrote previously, Congress, the White House and the Federal Reserve should be commended for the speed and boldness of their response to the crisis. But speed alone isn’t a virtue if the money is wasted. Funds that go to the wrong people, groups, companies or public services in the name of timeliness may not achieve their intended goals. And it’s impossible to assess that without more information. So the GAO – a nonpartisan federal agency that provides auditing and analysis to Congress — is an important addition to the conversation. The GAO is also populated with experienced employees who have waded into complex tasks like this before, such as its audits of the 2008 financial bailout.

Yet even the GAO said it has had difficulty obtaining all the information it needs to assess money allotted through the Coronavirus Aid, Relief, and Economic Security Act three months ago. Some of this is due to federal guidelines. The report notes, for example, that total federal spending data “are not readily available” because the Office of Management and Budget doesn’t require federal agencies to report Covid-19 related spending until July.

Nevertheless, the GAO found numerous problems with the various financial rescue programs. The Paycheck Protection Program, for example, was intended to help small businesses keep employees on the payroll during the shutdown by channeling government-backed loans through banks and other private lenders. But eligibility criteria for PPP funds was fuzzy, which created confusion for borrowers and lenders and resulted in money landing in the wrong hands.

The SBA, which has already been widely criticized for how poorly it rolled out payments to distressed entrepreneurs, gets a similar drubbing in the GAO report. In its haste to disburse funds, the SBA allowed lenders to rely on borrowers’ certifications that they were eligible for a PPP loan — opening the door to possible fraud and other shenanigans that put hundreds of billions of dollars in taxpayers’ money at risk. More broadly, the SBA still doesn’t appear to have measures in place to ensure that PPP functions properly. The GAO describes the SBA as hindered by problems with communication, processing capabilities, information technology and financial insight.

Federal agencies also ran into problems trying to deliver one-time payments to average Americans under the CARES Act. The money failed to reach some people, while others received funds to which they weren’t entitled. In one of the more tragicomic missteps the GAO outlined, the Treasury Department sent 1.1 million payments worth $1.4 billion to dead people. Why? Treasury doesn’t have access to “death data” that the Social Security Administration maintains. The fix? Simply give Treasury that data. The GAO said that Treasury officials became aware that the funds went to the dead only after it was reported in the media.

There are also concerns that the various stimulus programs are undermining one another. The CARES Act provides extra unemployment insurance to laid-off workers, and by last month states had already received a staggering 42 million unemployment claims. But the GAO says the Department of Labor has left states in the dark about bailout recipients who may have improperly double-dipped by receiving both PPP funds and unemployment benefits.

The GAO found other shortfalls that could imperil the public’s well-being. The Centers for Disease Control and Prevention, for example, acknowledged that it had provided limited Covid-19 testing data to the GAO’s analysts — apparently because it possesses limited data. The consequences of that? Well: “The absence of complete and consistent Covid-19 testing data reported through May 31, 2020, has made it more difficult to track and know the infection rate, mitigate the effect of infections, and inform decisions on reopening communities.”

Testing remains a core competency during a pandemic. But the GAO reports that laboratories and public health industry groups complained of shortages of testing machines and highlighted “the need for centralized federal coordination for procurement of needed supplies.”

When the GAO assesses the availability of medical supplies the federal government is meant to stockpile for national emergencies, similar alarm bells ring. “While agencies have taken actions to provide medical equipment and supplies, such as personal protective equipment (PPE) and ventilators, to states and other entities to help health care workers to respond to the Covid-19 pandemic, concerns have been reported about the distribution, acquisition, and adequacy of supplies.”

Demand for medical gear, PPE, pharmaceuticals and other necessities quickly outpaced the supply when the coronavirus took hold in the spring, causing mayors and governors across the country to ask the White House to coordinate the federal response more effectively. That has yet to happen. And the GAO said that it had requested information from the government about the status of emergency stockpiles but hadn’t received it as of mid-June.

This isn’t a new problem, by the way. The GAO said that the government’s emergency supply gaps have been worrisome for years. “In 2003, we reported that urban hospitals lacked the necessary equipment, such as PPE, to respond to a large influx of patients experiencing respiratory problems caused by a bioterrorism event requiring a similar response to a naturally occurring disease outbreak.”

Effectively delivering housing assistance to the needy is a concern, too. While the Department of Housing and Urban Development received a relatively modest amount of bailout funding, $12.4 billion, the GAO pointed out “persistent management challenges” at the agency Secretary Ben Carson oversees. Those shortcomings, which include turnover in HUD’s senior leadership and “shifting priorities,” haven’t helped “ensure effective management” at the agency. The GAO specifically noted that such problems could ultimately hurt low-income Americans who rely on bailout funds to stay in their homes.

Some of the report’s conclusions are particularly bracing. It notes, for example, that the “federal government continues to lack a national aviation-preparedness plan for communicable disease outbreaks” — leaving the country at risk both now and during any possible future pandemics.

The GAO’s report is also useful because it can help build a better blueprint for how future bailouts are orchestrated. With the number of new coronavirus cases surging again, it’s becoming increasingly clear that the pandemic won’t end quickly and that more stimulus will likely be needed.

The GAO offers recommendations about how to fix some of the problems it identified. It says, for example, that the SBA should monitor possible fraud more carefully in the PPP program. It also recommends that the Internal Revenue Service tell ineligible recipients of stimulus checks how they can return the money.

But these are mechanical improvements. Other problems and recommendations the GAO lays out expose a more fundamental issue: The rescue effort needs a unifying framework that would allow it to be more easily administered, documented and reported to taxpayers (something we’ve written about here.) Instead, as the GAO lays bare, the bailout is a patchwork of programs run by far-flung federal agencies that don’t seem to communicate with one another very effectively. While Treasury Secretary Steven Mnuchin is meant to be a primary coordinating force in the bailout effort, there is not much coordination on display in the GAO report.

Ultimately, the rescue effort should preserve individuals’ well-being and the foundations of the economy so life can return to normal once the virus abates. That doesn’t require a hodgepodge of numerous programs. It requires targeting the money where it’s most needed. In our opinion, individuals and families should be prioritized now and in the future. But regardless of how the programs are built, the efforts have to have transparency and accountability. And the GAO report is a reminder that our government is currently providing neither of those.