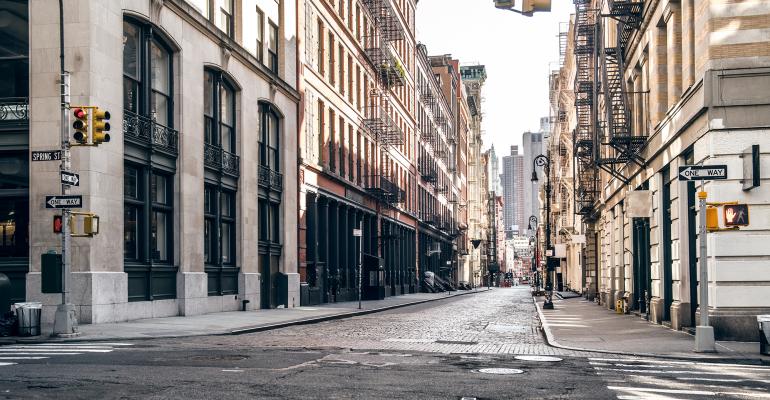 Investment sales of U.S. commercial properties fell by 68 percent year-over-year in the second quarter, according to RCA.

(Bloomberg)—The U.S. commercial real estate market is showing ever greater signs of stress, but there are still few deals to be had.

Transactions fell 68% in the second quarter across all property types compared with 2019 as potential buyers and sellers remained far apart on the prices of buildings, according to data released Wednesday by Real Capital Analytics.

The paralysis set in despite near-record amounts of capital ready to be deployed by some of the world’s biggest real estate investors.

“The buyer and seller expectations are not aligned,” said Simon Mallinson, an executive managing director at RCA. “Sellers aren’t being forced to the market because there’s no realized distress and buyers are sitting on the sidelines thinking there’s going to be distress.”

Second-quarter sales plunged 70% for apartments, 71% for offices, 73% for retail and 91% for hotels, according to RCA. Industrial property transactions were a brighter spot. Sales dropped only 50% in the second quarter, as online shopping thrived and manufacturers leased space to avoid supply chain disruptions.

For markets to function, there needs to be some agreement on what assets are worth. But the surging coronavirus outbreak is fueling uncertainty, making the outlook for commercial property just as cloudy as it was in March when lockdowns put the economy into deep freeze.

Whether investors will come off the sidelines any time soon remains to be seen. Private real estate funds had about $273 billion for property purchases at the end of June, little changed from the record $281 billion six months earlier, according to Preqin Ltd.

With the economic fallout from the pandemic mounting, deals have fallen apart or are being reworked. The buyer of the iconic Transamerica pyramid in San Francisco is going forward with its deal -- but at a 10% price cut from what it negotiated at the beginning of the year, according to people familiar with the matter who asked not to be identified discussing private talks.

A spokesperson for Transamerica said the parties are moving toward a closing, and declined to share additional details.

More than $32 billion of hotel and retail real estate was newly distressed in the first half of 2020, as rent delinquencies soared and borrowers missed payments, according to RCA.

“It’s becoming clearer, especially with the resurgence in cases across the country, that a three-month forbearance is not really going to satisfy the situation,” she said. “So there are other things that can be done. A lot of that has to do with loan modifications.”

“The cost of money is one of the biggest costs of an asset for real estate,” Fascitelli said recently.