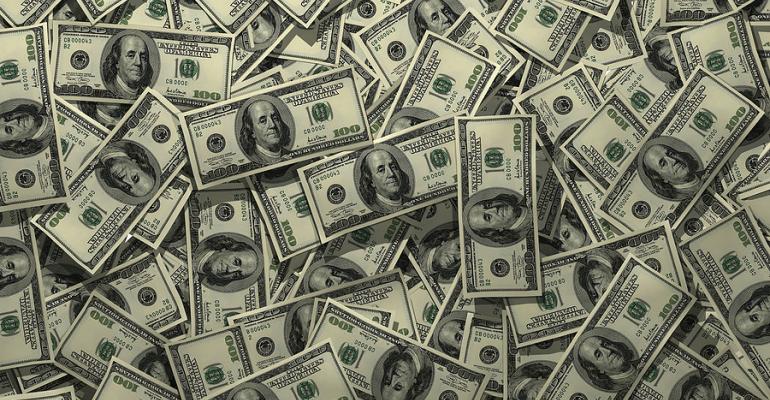 Debt Funds Are Flush With Capital for Real Estate Deals

Private equity debt investments are coming off a successful fundraising year and the tide of capital moving into debt funds shows no signs of slowing in 2015.

Last year, private equity debt funds raised a record amount of capital. A total of 26 global debt funds raised a combined $20 billion, which is up from 29 funds that raised $16 billion in 2013, according to data from London-based research firm Preqin.

“We’re finding that the capital-raising environment is becoming more favorable from our perspective as the market has healed over the past three years,” says Bill Stasiulatis, a partner and managing director at Torchlight Investors, a New York City-based firm that invests in real estate-related debt. The firm specializes in opportunistic debt financing. Torchlight raised just under $1 billion in the firm’s fourth debt opportunity fund that closed in 2013, and the company started a new fundraising effort this year with a goal of raising another $1 billion.

“One of the reasons these funds have had success in raising money, or bringing it in the front door, is that the returns from some of these structured finance products are very close to equity yields. So they become very attractive on a risk adjusted basis,” says Brian Stoffers, global president, debt and structured finance, for real estate services firm CBRE.

Some debt funds are able to create yields in the double digits by taking down the whole loan and selling off an A piece or a residual piece, adds Stoffers. Another way that these debt funds are boosting yields is by buying portfolios of sub-performing or non-performing loans. “By going in and reworking those mortgages, they are able to generate some pretty handsome returns,” he says.

Debt investments are also attractive to investors for the steady cash flows they generate. In addition, debt financing gets priority over equity. So being higher up in the capital stack is viewed as a safer or less risky investment than equity.“There has been a plethora of these debt funds, and most of them have had success in raising money,” says Stoffers. “The bigger challenge is finding loan opportunities that will accommodate the product.”

Some funds are continuing to expand into secondary markets and value-add properties in search of more opportunities and higher yields. “It seems as though the opportunistic and value-add players have moved more to the secondary and tertiary markets because of the expansion of the business cycle becoming more broad-based,” says Dr. Lawrence A. Souza, aninvestment manager and principal with the Johnson Souza Group Inc. in San Francisco.

In mid-January, for example, Torchlight Investors announced that it had provided $51.1 million in acquisition and renovation financing for Santa Fe Place, a 570,000-sq.-ft. regional mall in Santa Fe, N.M. The owners plan to spend about $30 million to renovate and upgrade the center. “In the secondary markets, while there has been a recovery in prices, it has been much less steep than in the primary markets,” says Stasiulatis. “So for us, that’s a much more attractive place to invest and to seek out opportunities.”

It also is less competitive, he adds.

Target yields for opportunistic deft financing at Torchlight Investors are generally in the low to mid-teens.

“We certainly have to be creative in structuring our deals to maximize the risk-return profile, but we are still finding pretty healthy opportunities to meet those return targets,” saysStasiulatis.

Yet some funds may be struggling to hit their target returns. “I don’t necessarily know that (funds) are hitting their targeted investment returns, because of the fact that the market has become so competitive, and the cost of debt has dropped so dramatically,” says Stoffers.

For example, some opportunistic debt funds have been quoting returns of 10 to 11 percent. “I would argue that many of those returns are dipping down into the single digits, because of the competition,” he notes.

Yields are dependent on a myriad of factors, such as risk, capitalization to value, asset quality and strength of the sponsor. However, some yields have dropped as low as 7 to 8 percent, he adds.

Yet even lower returns are not expected to discourage investors. Even with a drop in yield, the debt investments still produce an attractive yield, as well as steady cash flow. “The money markets today aren’t yielding anything. Some of the foreign bonds even have negative yields. For example, a 5-year treasury in Germany is yielding -25 basis points, says Stoffers.  “It’s all on a relative basis. So, the yields on these debt funds still look pretty good―even in single digits,” he says. 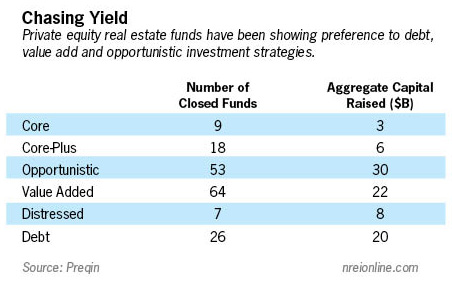