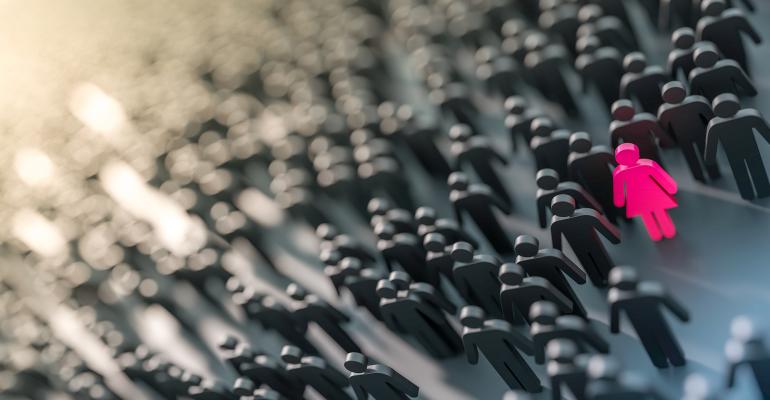 CRE Was Already Lagging in Employing Women. The Pandemic Is Creating an Added Challenge.

Advancement opportunities and equitable pay are still not where they ought to be for women in commercial real estate.

American women reached a pre-pandemic milestone in December 2019: For the first time in nearly 10 years, women surpassed men as a majority of the U.S. workforce. The coronavirus pandemic appears to have erased that achievement. Yet the commercial real estate industry still falls far short of the workforce as a whole when it comes to employing women.

“I am disappointed by the lack of progress for women overall,” says Wendy Mann, CEO of CREW Network. “Commercial real estate has historically been a predominately male profession, and we have been working for the last 30-plus years to bring more women into the industry and advance them to the top levels of leadership.”

That disappointment is tempered by optimism, though.

Two years ago, 44 percent of new hires in the executive management ranks at real estate investment management firms were women, notes Kristin Renaudin, chief financial officer of real estate investment management firm Stockbridge Capital Group and chair of NAREIM’s Inclusion and Diversity Committee. Renaudin adds, however, that while this represents “a great sign of progress,” NAREIM needs to collect data over the course of several years to determine whether this constitutes a trend.

Mann says that despite some disheartening data, “commercial real estate remains a dynamic, lucrative profession for women. We have the global business network, leadership training and support for women to keep excelling in the industry, and the data and research to effect progress and positive change.”

So, what should happen to ensure women keep excelling in commercial real estate?

The answer lies in three key areas: recruiting, mentorship and retention, according to Renaudin. This, she says, includes recruiting at earlier “entry points” (such as at the college level), improving networking and sponsorship opportunities, and committing to equal shots at pay increases and promotions.

In terms of compensation, CREW Network’s data indicates the gap in average salaries, bonuses and commissions between men and women stands at 34 percent, with women on the losing end of that equation. This gap may stem, in part, from women tending to be risk-averse and shying away from 100 percent commission-based positions, the group’s research suggests.

Mann believes the compensation disparity contributed to just 55 percent of women in CREW Network’s survey saying they were very satisfied with their careers. Other influences on career dissatisfaction may include fewer opportunities for advancement and less access to leadership roles for women compared with men, she says.

“Women could be growing increasingly frustrated being unable to reap the financial benefits of a thriving industry as fully as men, as our compensation figures show,” Mann says.

The pandemic has likely exacerbated that frustration. NPR noted that last September, 865,000 women left the U.S. workforce—four times more than the number of men who exited. Since February 2020, more than 2.3 million American women have dropped out of the workforce, according to CNBC.

“The coronavirus pandemic is wreaking havoc on households, and women are bearing the brunt of it,” NPR reported. “Not only have they lost the most jobs from the beginning of the pandemic, but they are exhausted from the demands of child care and housework—and many are now seeing no path ahead but to quit working.”

Renaudin can relate to that havoc. She not only holds down a full-time job, but she’s the mother of three school-age children. The pandemic has underscored the reality that it’s often tricky to establish and maintain a work-life balance, she says.

“Many companies have worked hard to allow flexibility for employees to meet these pandemic-related challenges, but the long-term changes are not yet clear,” Renaudin says. “Ultimately, I believe that firms who are most willing to support employees with flexible policies—which may include partial remote work, more flexible hours, atypical career paths and comprehensive benefit plans—will be most successful in attracting and retaining top talent.”

Mann says it shouldn’t take a pandemic to highlight how critical women are in driving the success of the commercial real estate sector and the entire economy.

“Women are leading resiliently through crisis and chaos, both at home and at work. We know that working women are taking on the majority of home and family duties as well,” she says. “Women are being challenged in new ways—stretching beyond their limits, flexing and pivoting—all while thriving in their business and careers.”

Pandemic or not, women of color face an especially rocky path in commercial real estate. That’s because, as Renaudin points out, these women must navigate biases against both gender and race.

Mann says the tide is turning in a positive direction, though. The commercial real estate industry is “finally starting to recognize” the business benefits of diversity, including the hiring and advancement of women and people of color, she says.

“It’s no longer just ‘the right thing to do,’” Mann says. “We know that the inclusion of different people based on gender, race, ethnicity and sexual orientation is a business advantage. As more companies prioritize recruiting, retaining and advancing women, the needle will move and we will see faster progress.”

Renaudin feels hopeful about the future of DEI in commercial real estate. According to the NAREIM survey, more than 70 percent of real estate investment management firms have DEI staff or teams, and 65 percent have put DEI decision-making in the hands of the C-suite.

“We see greater acknowledgement and appreciation of the importance of diversity across all levels, roles and departments of an organization. Diversity provides broader perspective and balance, resulting in more empathetic and inspirational leadership,” she says. “Encouragingly, we’ve witnessed a strong willingness to collaborate on DEI objectives and perspectives across the industry and less pride of authorship, signaling that the industry is collectively working toward the same goal.”