/sites/all/themes/penton_subtheme_wealthmanagement/images/logos/footer.png
Recent
Recent
London Gets Back to the Office, But Bankers Drag Their Heels
Jan 24, 2022
Seven Must Read for the CRE Industry Today (Jan. 25, 2022)
Jan 24, 2022
What the Past Year Has Brought for a Newly Launched Investment Management Firm
Jan 24, 2022
City of London’s $10 Trillion Chinese Hub Plans for Growth
Jan 24, 2022
Featured
The 10 Best and 10 Worst States in Which to Retire in 2021
Jul 15, 2021
Poll: 15 Classic Books on Investing and the Markets
Apr 03, 2020
25 U.S. Markets Adding the Most Multifamily Units This Year
Feb 03, 2021
Fifteen Must-Listen Business Podcasts for Advisors
Aug 14, 2020
ESG Investing
brought to you by 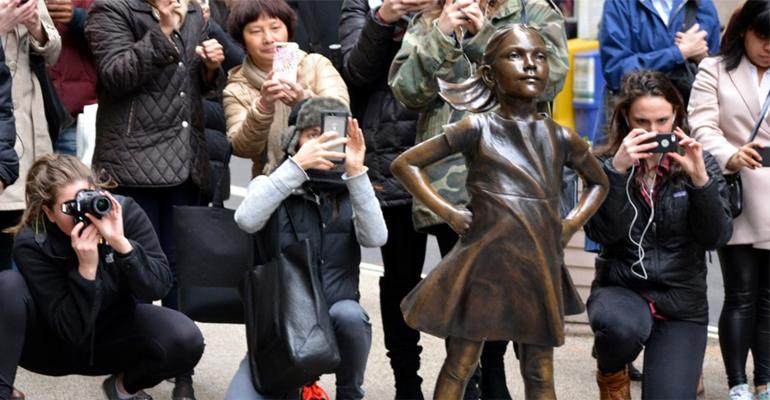 Beyond the Statue - Why Board Diversity is Important

On March 7 in celebration of International Women’s Day, the 7,000 pound charging bull sculpture, which has reigned alone for 27 years in Lower Manhattan as a potent symbol of Wall Street, woke up to some company. Investment firm State Street Global Advisors (SSGA) had placed the statue of a young girl standing in defiance opposite the bull. “Fearless Girl” was placed to introduce and promote its campaign for increasing the number and role of women in corporate leadership positions. This is particularly notable for State Street as the majority of its assets are passive, and large passive managers such as SSGA, Blackrock, and Vanguard have historically been oft-criticised for not taking a more active approach with the enormous amount of shares they own. Intuitively this makes sense as an active manager may sell out of their position if they do not agree with the decisions being made by Corporate Boards and senior management. Passive funds, however, must continue to own the company as long as it resides in the index. Therefore, why not convert that mandatory share ownership into a force for better corporate stewardship and positive long term value!

Passive equity assets under management (AUM), globally, now stands at approximately USD6.5 trillion1. As an example, share ownership in Apple, the largest holding in most large cap US and global indices, is dominated by passive equity. Eight of the top ten largest mutual fund/Exchange Traded Fund holders are passive funds, accounting for some 8% of the shares, and institutions with significant passive equity AUM account for almost 18%2. As an anecdote, Warren Buffet, via his Berkshire Hathaway investment vehicle, owns approximately 1% of Apple. This is dwarfed by passive giant Vanguard, which owns well over 6%3. Clearly, steering such a significant number of AUM toward improving corporate stewardship, and in particular the role of women in corporate leadership is beneficial.

There is a growing body of research pointing to improved long term company performance as Board diversity increases, including work done by Credit Suisse and MSCI4. Besides recognizing that having a greater number of alternate views introduced at the Board and senior leadership level should lead to more robust discussion and decision making, women are significantly underrepresented relative to their workforce contributions and purchasing power. For example, in the US, women account for approximately 54% of all professional level jobs and 60% of the college educated workforce5. In addition, they drive or are a major factor in roughly 70-80% of consumer spending6. These statistics speak volumes as to how any company will most likely see better long term success by having appropriate representation of their own workforce, let alone those that are pulling the levers behind revenue growth.

Due to the exponential increase in the volume and spread of information via social media and other platforms, soon a company’s standing on a variety of ESG issues, including diversity, will be widely available and seen in real time. This creates a powerful branding incentive for a company not to risk their reputation and be forced into a defensive position, even if the company leadership does not believe in the long term value thesis. There may be an economic impact as well given an increasing amount of research indicates that millennials and women, to a growing extent, invest and spend their money based on their values, not just economic rational.

The number of women serving on Boards has improved globally, but there remains significant regional differences and a long way to go on the senior management level. For example, in 2016 women accounted for only 5.3% of Board membership in Japan versus 20% for the US and 27% for Europe7. The positive news is the trend has been growing, but even at 27%, Europe looks good on a relative basis, but still has much room to improve for true female representation and diversity.

However, it remains to be seen how involved passive players will be beyond publicity activities. Despite the powerful message and symbolism of Fearless Girl, the actual action SSGA plans to take is a bit vague:
“Our preferred approach is to drive greater board diversity through an active dialogue and engagement with company and board leadership. In the event that companies fail to take action to increase the number of women on their boards, despite our best efforts to actively engage with them, we will use our proxy voting power to effect change — voting against the Chair of the board’s nominating and/or governance committee if necessary."8

In another example of the difficulty in translating good intentions and marketing into concrete action, passive giant Blackrock has made numerous public statements regarding the dangers of climate change. “Investors can no longer ignore climate change. Climate factors have been under-appreciated and under-priced because they have been perceived to be distant [problems],” said Ewen Cameron-Watt, a senior director at BlackRock, in a September 2016 Financial Times article9. Yet, Blackrock was called out by several institutional investors for voting against investor led climate resolutions at the annual meetings of ExxonMobil, Occidental and Chevron in 2016 alone.

Active ESG equity managers, such as AllianzGI, have long considered this a key factor in unlocking the long term value to stocks and therefore have incorporated it into a more comprehensive measure of corporate governance and therefore improved ESG efficacy overall. For example, active investors are better equipped to touch on multiple aspects of diversity such as technical expertise, regional backgrounds, industry specific experience, etc. This is on contrast to the simplistic question of “Do you have X% of women on your Board, yes or no?”

In this context, the passive manager response, although welcome, is bit tardy and timid, regardless of intentions. The best way to facilitate rapid change is thoroughly demonstrating to corporate leadership that there is a sacrifice in long term stock price performance, in absolute terms and relative to peers, by avoiding greater leadership diversity. In addition, a more effective tool is moving beyond simple “encouragement” to having an integrated ESG evaluation process that measurably detracts from a firm’s ESG rating for an absence of women in leadership roles and/or no tangible plan for how to improve.

In summary, recognition of and action on ESG related issues by the passive investing giants can only have a positive social impact and will help raise awareness of the importance of leadership diversity amongst corporate Boards and senior managers. It remains to be seen however if these passive investors can move beyond simple verbal statements and publicity acts to join active ESG managers in truly facilitating change.

The material contains the current opinions of the author, which are subject to change without notice. Statements concerning financial market trends are based on current market conditions, which will fluctuate. References to specific securities and issuers are for illustrative purposes only and are not intended to be, and should not be interpreted as, recommendations to purchase or sell such securities. Forecasts and estimates have certain inherent limitations, and are not intended to be relied upon as advice or interpreted as a recommendation. 282148.