Beta Bets Have Paid Off

Is it time to cash in?

Still feeling fearful about equities? If so, know this: your confrères aren’t. Out of the past eight trading days, six have been “risk on.” You can get a sense of investors’ taste for high-beta stocks in the chart below.

From its Patrick’s Day bottom, the S&P 500 has gained nearly 317 points, or 12.5 percent, driven mainly by such volatile issues as Advanced Micro Devices (Nasdaq: AMD) and Nvidia (Nasdaq: NVDA). AMD’s beta is 2.08 while NVDA clocks in with a 1.55 coefficient. These two tech outfits take up just 0.76 percent of the S&P’s real estate, but their outsized volatilities give them powerful juju. AMD shot up 7.6 percent on Tuesday alone as NVDA rose 5.2 percent. That, in part, accounts for the S&P’s 3 percent advance on the day.

Over the past week, investors have opted for high-energy stocks in an effort to recoup losses sustained during the virus outbreak. It’s a strategy that’s worked rather well. The S&P 500 has clawed back 42 percent of its Covid-scare losses.

AMD and NVDA are the heftiest components of an S&P spin-off, the S&P 500 High Beta ETF (NYSE Arca: SPHB), and by definition, the most voluble of the benchmark’s constituents. The methodology behind SPHB is fairly simple. Its underlying index is a distillation of the S&P 500’s 100 highest-beta components-- weighted by their trailing 1-year coefficients. SPHB rose 15.5 percent for the week.

SPHB isn’t the only ETF focused on high-beta issues. The Salt High truBeta U.S. Market ETF (Cboe BZX: SLT) relies on a proprietary forward-looking beta coefficient rather than the backward-looking metric employed in the SPHB methodology. As a risk control, stocks with low correlation to the benchmark SPDR S&P 500 Trust (NYSE Arca: SPY) are screened out in the belief that high beta combined with low correlation implies high volatility.  Although beta and volatility (the standard deviation in an investment’s returns) are both measures of risk, portfolios sorted by the two metrics tend to generate different mixes of sector tilts.  Reflecting the current shop-from-home trend, SLT’s top two allocations are Wayfair Inc. (NYSE: W) at 2.1 percent and Carvana Co. (NYSE: CVNA) at 1.6 percent.

AMD shows up in the SLT roster in seventh place with NVDA pulling up behind in in the number 15 slot. Together, these stocks account for 2.4 percent of the SLT portfolio. In the past week, SLT chalked up a 9.1 percent gain.

Then there’s the Innovator Lunt Low Vol/High Beta Tactical ETF (Cboe BZX: LVHB) which tracks an index that switches between the S&P High Beta Index and the S&P Low Volatility Index based on the benchmarks’ relative strength readings. At each monthly reconstitution, LVHB’s portfolio will mirror the S&P index with the highest relative strength measure. LVHB posted an 8 percent increase in its share price for the recent trading week.

There’s no question that portfolio runners that allocated tactically to high-beta issues have done well over the past month, but they ought to be looking for off-ramps now. The Cboe Volatility Index, the well-known VIX “fear index,” is showing signs of retreat. VIX set a lifetime record in mid-March, but now has eased back below its 50-day moving average for the first time since February. 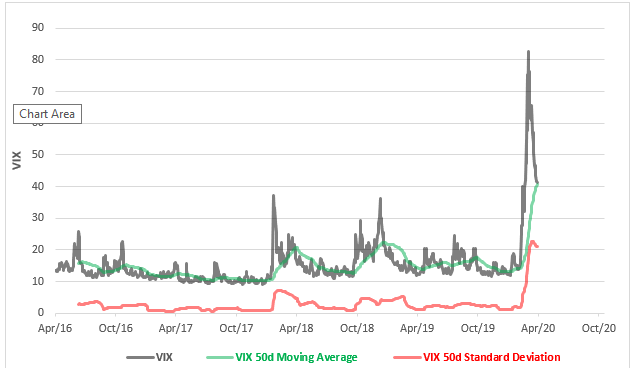 No matter what high-beta ETF a portfolio manager uses, another market shake-up is bound to create pain. Over the past year, the drawdowns for any of the three have been nearly twice as deep as the S&P 500’s. If we posit even odds for a 20 percent move--up or down--in the S&P over the next 12 months, SPHB’s expected return is -6 percent. That’s negative six percent. Put it more stark terms, a 10 percent slump in the S&P is likely to translate to a 17 percent erosion in SPHB’s value.

Maybe it’s time to cash in that beta ticket and wait for the next race.