/sites/all/themes/penton_subtheme_wealthmanagement/images/logos/footer.png
Recent
Recent
How to Diﬀerentiate Your Financial Advisory Practice
May 26, 2022
Return to Office to Avoid Staff Conflicts, JLL Boss Says
May 26, 2022
It’s Official! Client Niche Drives Growth
May 26, 2022
Hybrid Work Was Supposed to Create the Best of Two Worlds. It’s Turning Out to be a Challenge for Office Tenants.
May 25, 2022
Featured
The 10 Best and 10 Worst States in Which to Retire in 2021
Jul 15, 2021
Poll: 15 Classic Books on Investing and the Markets
Apr 03, 2020
Fifteen Must-Listen Business Podcasts for Advisors
Aug 14, 2020
Celebrity Estates: Jay Leno and Planning for Classic Car Collections
Feb 22, 2022 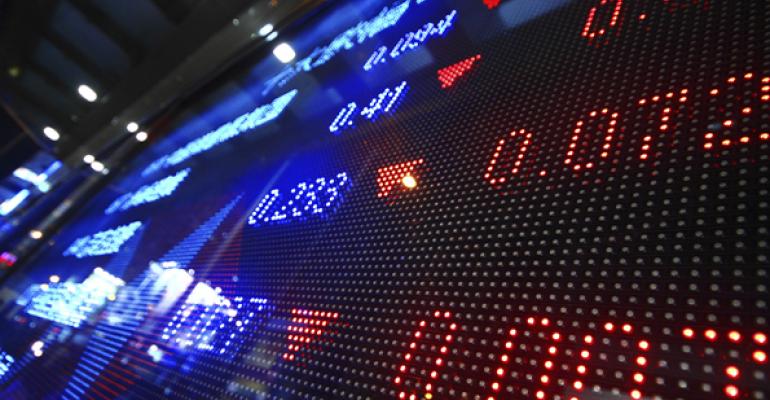 While stocks were relatively unchanged for the week of May 5-9, 2014, daily and intra-day volatility has been notable—the S&P 500 saw 1% intraday moves on Tuesday, Wednesday, and Thursday. The stock market volatility of the past few weeks seemed to shake the nerves of individual investors leading to a week of net outflows from funds that invest in U.S. stocks after seeing net inflows in five of the past six months, according to data from ICI.

The volatility we call “market storms” is likely to continue to be a characteristic of markets this year, caused by well-known factors, such as: geopolitical conflict in Russian border countries, slower economic growth in China, or a weak start to the year for the U.S. economy, among others, but also lesser-known factors like the Oklahoma earthquakes, solar flares disrupting communications, and the Ebola outbreak. So, while ongoing volatility with pullbacks of 5% or more is likely, a bear market—defined by a decline of 20% or more—is very unlikely in 2014. A key basis for our high degree of confidence in this forecast is an indicator with a flawless track record over the past 50 years: the yield curve.

Market participants have become worried about when the Federal Reserve (Fed) may start to hike short-term interest rates. Many market participants expect the Fed to begin rate hikes next year. But history shows that the start of rate hikes does not really matter that much to stocks after an initial dip and quick recovery. Instead, bull markets end and bear markets begin, as they did in 2000 and 2007, when the Fed pushes short-term rates above long-term rates. This is referred to as “inverting the yield curve.” For example, the S&P 500 peaked in 2000 and 2007 when the 3-month to 10-year yield curve was inverted by about 0.5% (3-month Treasury yields were about one-half of one percentage point above the yield on the 10-year Treasury note) [Figure 1]. 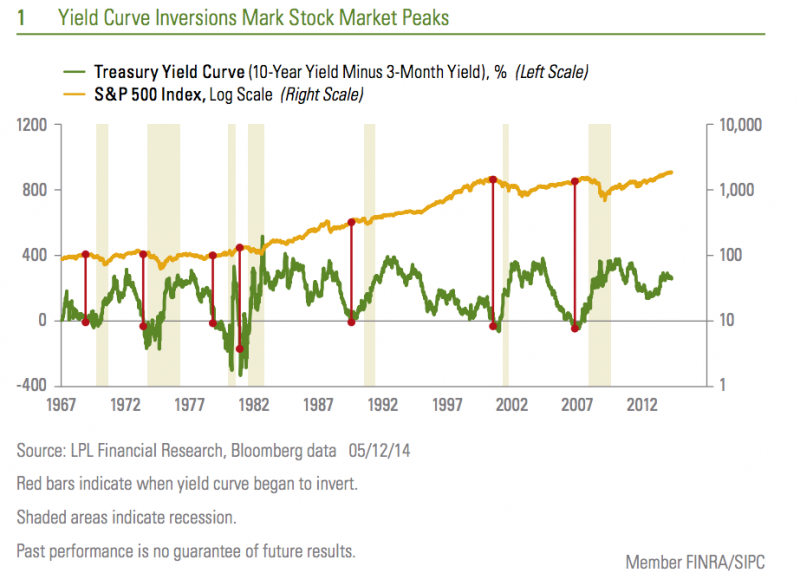 Why does an inverted yield curve signal a major peak for the stock market? Because every recession over the past 50 years was preceded by the Fed hiking rates enough to invert the yield curve. That is seven out of seven times—a perfect forecasting track record. The yield curve inversion usually takes place about 12 months before the start of the recession, but the lead time ranges from about five to 16 months. The peak in the stock market comes around the time of the yield curve inversion, ahead of the recession and accompanying downturn in corporate profits.

How far the Fed must push up short-term rates before the yield curve inverts by 0.5% depends on where long-term rates are. Even if long-term rates stay at the very low yield of 2.6%, to invert the yield curve by 0.5% the Fed would need to hike rates from around zero to over 3%!  Based on the latest survey of current Fed members that vote on rate hikes, conducted earlier this year, members do not expect to raise rates above 3% until sometime in 2017, at the earliest. The facts suggest the best indicator for the start of a bear market may still be a long way from signaling a cause for concern.

While there are reasons the U.S. economy could experience a recession without first experiencing an inversion in the yield curve, the flawless track record earned over 50 years of varying economic, legislative, regulatory, geopolitical, and social conditions is a testament to the robust nature of the yield curve as an indicator. So while we do expect more volatility this year, we do not expect a bear market.

Yield Curve is a line that plots the interest rates, at a set point in time, of bonds having equal credit quality, but differing maturity dates. The most frequently reported yield curve compares the three-month, two-year, five-year and 30-year U.S. Treasury debt. This yield curve is used as a benchmark for other debt in the market, such as mortgage rates or bank lending rates. The curve is also used to predict changes in economic output and growth.