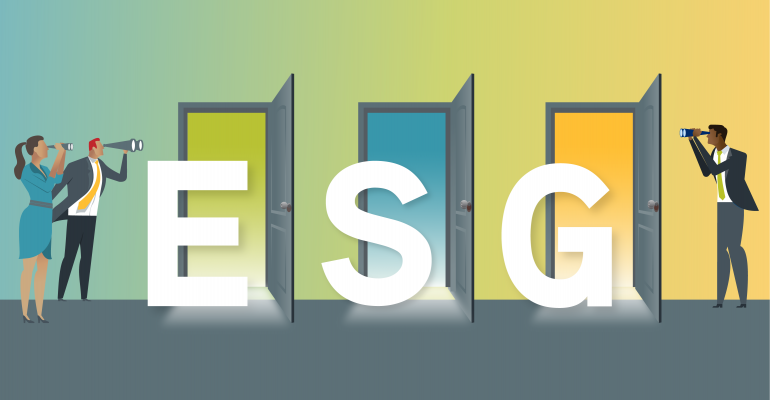 As investors watched—and lived—the events of 2020, ESG issues only grew in importance. Here are the ones that rose to the top and will likely stay there in 2021.

Attempting to predict short-term fluctuations in markets is typically a losing battle. So is trying to predict longer-term trends and making grand pronouncements about them. (Who in 2019 would have predicted the coronavirus pandemic?) But when it comes to ESG, listening to investors and understanding what matters to them can point to a gravitational pull in a certain direction. Here are three themes we see investors paying attention to in 2021 and beyond.

With President-elect Joe Biden appointing John Kerry as the first-ever US climate czar and his promise that the United States will rejoin the Paris Agreement on climate change the day he’s sworn in, it’s clear that the new administration is planning on elevating the climate crisis as one of the government’s top priorities for 2021. Many investors are rejoicing over the prospect of the US recommitting to tackling climate change and potentially regaining international leadership on the issue.

An encouraging aspect of Biden’s climate plan is his promise to require publicly traded companies to disclose climate risks and the greenhouse gas emissions in their operations and supply chains. This would go a long way toward providing investors with the transparency they need to make informed investment decisions. Although many companies already disclose this information, many others don’t. And investors can’t accurately evaluate climate risk in their portfolios until these gaps are closed.

Investors long ago recognized that climate change is an investment risk in their portfolios, but recently they’ve gotten bolder, using their votes on shareholder resolutions to signal to companies that climate risk can no longer be a back-burner issue. In fact, average investor support for environmental resolutions during the first six months of 2020 was 33%, up from 22% in 2019, according to Proxy Insight.

Beyond wielding their proxy votes, investors are also tackling climate risk by collaborating through initiatives coordinated by organizations like Ceres, the Principles for Responsible Investment, and Climate Action 100+. On the fifth anniversary of the Paris Agreement, some investors and asset managers, representing over $9 trillion in assets under management, even stepped forward to commit to support the goal of net zero greenhouse gas emissions by 2050.

Investors have been engaging on the issue of board diversity for years, but those efforts have been focused mostly on gender. This was always seen as a stepping stone to bigger and broader diversity conversations that could include race, ethnicity, and sexual orientation, among other things. In large part, investors started with gender because they had access to better data.

But the death of George Floyd reignited the fuel for the Black Lives Matter movement, and many companies began speaking out in support of their Black employees and the greater Black community. Investors were similarly energized and have shown interest in enhancing their diversity engagement initiatives, expanding their conversations beyond gender to include topics such as race, ethnicity, and sexual orientation.

Parametric did just that last summer when we wrote to the board chairs of all the Russell 3000 companies that lacked a female director. We had broader conversations about diversity at the workforce level as well, and we pushed for more diversity disclosure from public companies.

Legislative changes in tandem with investor efforts can also be instrumental in encouraging boards to be more diverse. For example, in September 2020, emboldened by the success of California’s 2018 board gender diversity law—requiring publicly held companies with headquarters located in the state to include a minimum number of women on their boards—California governor Gavin Newsom signed into law a separate bill that pushed the issue further by requiring a minimum number of directors from underrepresented communities. Illinois and more than 10 other states have followed California’s lead and have either enacted or are considering board diversity statutes.

Exchanges are also becoming more active on this issue. Nasdaq filed a proposal in December with the SEC to ask for permission to require the more than 3,000 companies listed on its main US stock exchange to have at least one female director and one from an underrepresented minority group. If the SEC approves the proposal, it could have a profound impact on the entire US market.

Modern slavery includes human trafficking as well as practices such as forced labor, debt bondage, and child labor. With an estimated 40 million people in modern slavery, it’s hardly a new phenomenon, so you might wonder why investors in recent years have been increasingly keen to mobilize collectively to make a difference.

Investors are of course interested in minimizing the human toll of modern slavery and in better understanding both the reputational and legal risks companies face. But frankly, investor scrutiny on this issue is also sparked by regulations that have come out of both the United Kingdom in 2015 and Australia in 2018 requiring investors and companies to make statements that demonstrate efforts in assessing these risks. Modern slavery has always been more than an ethical issue to investors, but with recent legislation and growing customer awareness, the risks have become a bit more tangible.

As both companies and investors research how to identify modern slavery risk in company supply chains, the challenges of unearthing this often hidden risk is apparent. Unsurprisingly, like most other social issues investors contend with, data is lacking. To help fill that gap, organizations such as the Liechtenstein Initiative and Know the Chain are helping educate investors to enable them to better address the risks of forced labor in global supply chains.

While none of these topics are new to investors, we expect they’ll continue to take more prominence in 2021. As the world recovers from an eventful 2020, investors will clamor for better disclosure to help them assess companies’ progress. After all, it’s impossible for companies to manage what they don’t measure. So by pushing for more public data, investors can encourage better behavior, accountability, and real change.