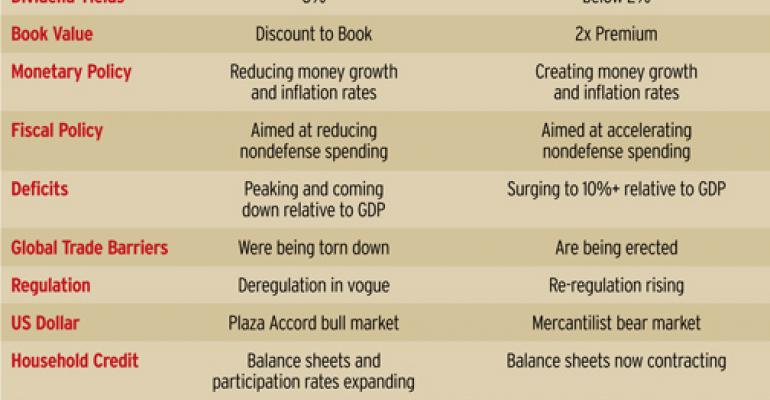 Much has been made of the similarities between the huge market surge off March lows this year, and the dramatic rally in 1982.

Much has been made of the similarities between the huge market surge off March lows this year, and the dramatic rally in 1982: in August, 1982, unemployment was near 10 percent and would rise for several months more, many thought the economy was in its worst shape since the Great Depression, oil prices had collapsed, the U.S. auto industry was falling apart, the household sector was thought to be hugely overextended and American households were massively in debt.

The significance is that the 1982 rally marked the end of a recession.

Could the same be true today? The Big Picture blogger and FusionIQ research director Barry Ritholz says not so fast. Using data from Gluskin Sheff, S&P and Bloomberg on the Dow Jones Industrial Average, he notes that there are vast differences between then and now: Equities are trading at much more inflated multiples these days, while money is being pumped into the system by the Fed, deficits are surging, balance sheets are contracting, trader barriers are being erected and taxes are rising. We may have a ways to go yet.