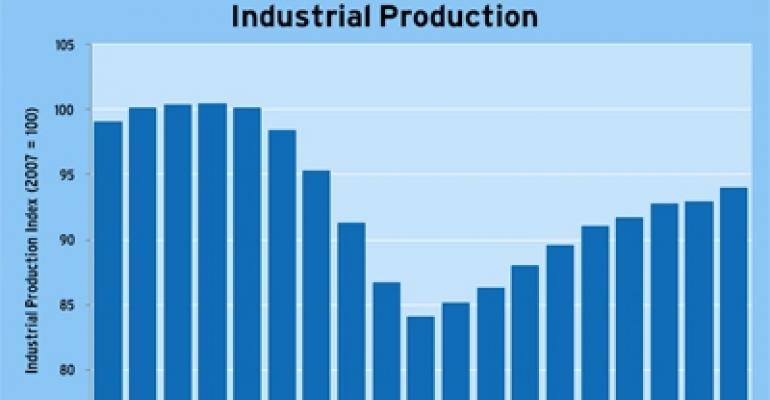 Why Industrial? Why Now?

The industrial real estate sector was severely impacted during the 2008-09 recession, and has subsequently lagged in the early stages of the U.S. economic recovery.

However, beginning in the second half of 2010, industrial real estate fundamentals have been improving. Led by a rebound in consumer spending, business inventory restocking, and a resurgence of U.S. trade volume and manufacturing production since 2010, the industrial real estate sector has benefited from recovering fundamentals and, we believe, is poised to continue its improvement.

Though global macroeconomic risks remain, investors have the potential to acquire high quality industrial assets in select markets at below-replacement cost and below previous peak market values, creating the potential for attractive investment returns over the next several years.

In July, U.S. exports of goods increased 5.3%, while U.S. imports expanded 3.5% as compared to the monthly average of the first quarter of 2011. Overall, 2010 was a year of significant recovery for the manufacturing sector, and growth continued into the first half of 2011, albeit at a slower pace. A recovering world economy and weak U.S. dollar are expected to support further improvement in the industrial sector through the remainder of 2011.

Why to consider industrial

Industrial property investments offer a number of advantages, such as:

In addition to these long-term benefits of investing in industrial real estate, we believe the recovery of the industrial sector is relatively late in this real estate cycle, suggesting that much value appreciation is still to be realized. Most industrial markets have experienced strong leasing activity and solid net absorption over the past year.

As of the second quarter of 2011, nearly 1 billion square feet of industrial space had been absorbed nationwide since the third quarter of 2010. Several markets have already shown positive effective rental growth and a few are experiencing speculative development.

However, despite the strong positive absorption experienced over the past year, industrial vacancy remains elevated. Therefore, we believe most industrial markets will not experience significant construction until vacancy declines toward its long-term average. This constrained pipeline is a key difference from the last major real estate downturn of the early 1990s. Along with robust corporate profits and healthy balance sheets, as the economy continues to improve, positive absorption and low levels of construction are expected further to bring down the vacancy rate going forward.

Average industrial transaction cap rates remain the highest of all property sectors at 7.9% in the second quarter of 2011, according to Real Capital Analytics. However the gap continues to narrow. After a steep decline during the 2008-09 recession, values for institutional quality assets have rebounded strongly since early 2010.

The NCREIF industrial sector realized total returns of 4.5% during the second quarter of 2011, outperforming the overall NCREIF Property Index for the first time since the index turned positive in the first quarter of 2010. We believe the industrial sector should offer attractive total returns going forward, with new investments over the next 24 months benefiting from the up cycle.

Despite the recovery in the industrial real estate sector over the past year, risks remain. The global and U.S. economic recovery has been of moderate strength to date and plagued by delayed job growth. Several of the industrial indicators have slowed or turned negative during the third quarter of 2011. The rate of U.S. industrial production growth slowed in August. As of July, while exports expanded, imports fell two consecutive months for a cumulative 1.6% decline. Additionally, in August, U.S. personal income decreased for the first time in two years.

As business inventory, import/export volumes, consumer spending, and manufacturing recover, industrial real estate should offer attractive returns over the next several years. The industrial market posted strong leasing activity, declining vacancies, and diminished supply, which should set the stage for accelerating net absorption and rising rents in upcoming quarters. We expect effective rent growth to turn positive in the second half of 2011 and increase moderately in 2012-13 before accelerating strongly in 2014-15. While risks remain for the outlook of the U.S. and global recovery, supply and demand fundamentals and capital market data suggest that the industrial sector will likely experience strong income and appreciation returns over the next several years.

David Lynn is a managing director, generalist portfolio manager and head of investment strategy for Clarion Partners in New York.