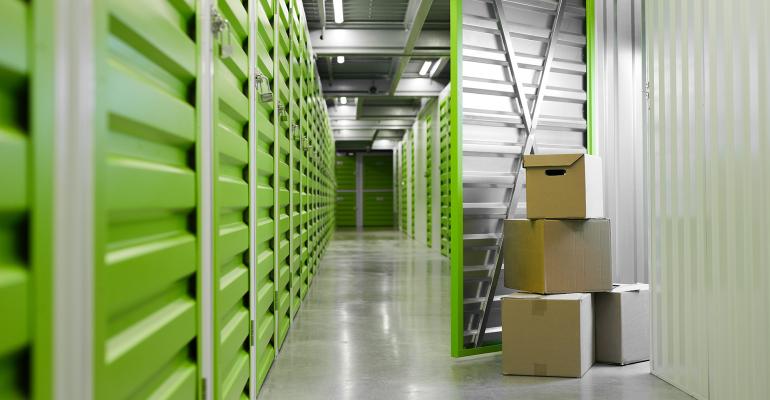 A strong run throughout the pandemic and stable fundamentals continue to make the sector a popular draw for many types of real estate investors.

Amid all the chaos and uncertainty that has roiled the commercial real estate throughout the COVID-19 pandemic, self storage has stood alongside subsectors like logistics real estate and data centers as a steady performer. As a result, it won the attention of investors new to the sector who will remain active players even as other property sectors continue to stabilize.

Operators say more of their space is occupied than ever before—and the spring leasing season has barely begun. Investors have responded, bidding up prices on properties in the market.

High prices are tempting some self-storage owners to consider selling. “This might be a might be a good time to harvest those gains,” says Steven Weinstock, first vice president and national director of the self-storage division for Marcus & Millichap, working in the firm's Oakbrook Terrace, Ill., offices. “We are seeing an uptick in activity.”

Cap rates for self-storage assets have been slightly below their long-term averages across the majority U.S. metropolitan areas in early 2020, according to Yardi Matrix. Investors regularly trade self-storage properties at capitalization rates in the mid-to-low 6 percent range, according to dealmakers interviewed for this story.

"We have sold numerous properties over the last six months that have transacted below a 5 percent cap rate," says Clark.

Buyers are also optimistic about the future—and are offering accordingly high prices. “Capital is focusing on year-two or year-three projections, versus trailing information,” Brian Somoza, managing director of capital markets for JLL. “That being said, replacement cost is still a governor on pricing.”

The most expensive, gateway cities are the exception. “Self-storage cap rates in the gateway Metros have seen upward movement of five to 10 basis points from 2019 levels,” says Doug Ressler, senior research officer at Yardi Matrix, based in Scottsdale, Ariz.

Investors have been more active so far in 2021. "We see increased interest in storage investments, particularly as a stabilized, cash-flowing asset," says Ressler. Investors made 724 deals to buy self-storage properties in 2020, compared to 908 in 2019. "Volume was slightly dampened in 2020... due to the prior year oversupply and uncertainty during the height of the pandemic.”

Some new investors are now taking the plunge by closing deals. They have been attracted by strong, dependable performance—even during a global crisis.  “The rest of the world has caught on to what we have known for years,” says Aaron Swerdlin, vice chairman for Newmark, working in the firm's Houston offices.

Those investors include private equity funds that plan to re-allocate more of their investment portfolios to alternative real estate investments as they pivot out of fixed-income investments.

“We have fielded lots of interest over the last nine months from equity groups,” says Steve Mellon, managing director of capital markets for JLL Capital Markets, working in the firm’s Houston offices. New investors like these typically take six to nine months to educate themselves before they transact, he says. “We expect the third quarter and the fourth quarter of 2021 to be very active.”

The largest self-storage deals in the past year included Bill Gates’ Cascade Investment, which partnered with GIC to buy a stake in the StorageMart platform of self-storage properties in October 2020. Blackstone Real Estate Income Trust (BREIT) also agreed in October to spend $1.2 billion to buy Simply Self Storage from a Brookfield Asset Management real estate fund.

“Investors outside the industry recognized the great potential and reacted,” says Ressler. “The biggest private equity move was Blackstone’s purchase of the Simply Self Storage portfolio in the Sun Belt.”

With all of these interested investors, brokers are working hard with potential sellers to make sure there are properties available to buy. “There are many great deals that are still out there… [despite] the perception that REITs have bought all the good ones,” says Weinstock.

Demand continued to rise for self-storage space through the pandemic. That should allow the managers of self-storage properties to raise their rents. “Pricing power ought to be exceedingly strong this year,” says Swerdlin.

Of the space at self-storage facilities, 94.6 percent was occupied at the end of 2020, according to an analysis of data from five publicly-traded real estate investment trusts (REITs) focused on self-storage by Newmark. “That’s 200 basis points higher than we have even been for occupancy rates,” says Swerdlin. “We generally see a 200 basis point decline at the end of the year.”

“Many REITs in their earnings calls for 2020 Q3 and Q4 for 2020 reported record high occupancies,” says Ressler. “Street rates in most major markets had fully recovered and saw year-over-year growth.”

Demand for self-storage is likely to get even stronger as the weather gets warmer. Spring and summer are usually the busiest times of year. Developers also put down their shovels during much of the pandemic. They delivered just 59 million square feet of new self-storage space in 2020. “That’s the smallest volume of new deliveries since 2017,” says Weinstock. “Development slowed, allowing for demand to absorb new units, as well as those that came online in the last two years.”

Just like the rest of the U.S. economy, developers have been more active in 2021. They are once again buying sites to build, according to JLL. But they have not yet started building enough deals to frighten self-storage experts.