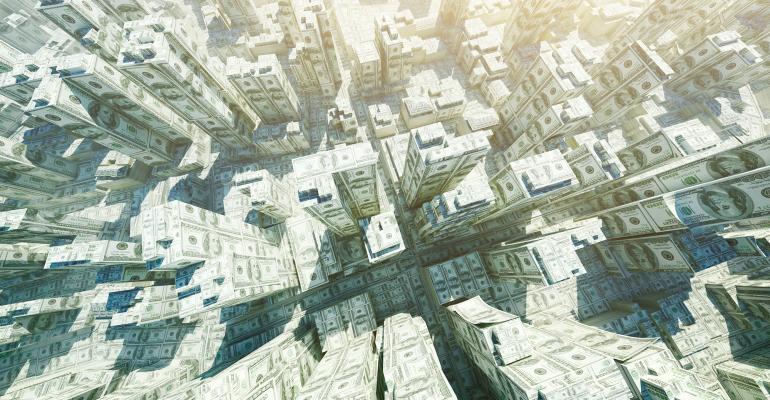 According to Preqin, capital raising is now exceeding 2020 levels, but still trailing volumes seen in 2019. Year-to-date fundraising through mid-October stood at $152.2 billion, which is above the $146.4 billion raised in full year 2020 and below the $186.1 billion annual raise for 2019. Preqin also noted that funds in market are at record levels, both by number and aggregate capital targeted. At the end of third quarter, there were 1,284 funds targeting $365 billion in capital compared to the 794 funds in the market targeting $251.1 billion in capital at the start of third quarter 2019.

“The trend that we have seen play out in the market, and on our platform, is that it has been a robust fundraising environment,” says Bernie McNamara, global head of investor solutions for CBRE Investment Management. “A bit of that is a bounce-back from pent-up demand that was on pause or slowed down during the early days of COVID.” Capital inflows began reaccelerating in fall 2020. Over the 12-month period from third quarter 2020 through third quarter of 2021, CBRE Investment Management saw record capital coming in across its platform with roughly $16 billion in capital raised across all real asset formats.

A number of factors are driving fundraising activity. Broadly, investors are searching for characteristics that real estate typically provides, such as diversification, fixed income, lower volatility and a hedge against inflation. For those investors who are seeking higher returns, there also are select distressed assets that are creating opportunities for good targeted enhanced return investment opportunities, says McNamara. “It’s not that the whole market when on sale because of COVID, but there have been selective opportunities, whether it is providing liquidity through a recapitalization of a project or fund or gap equity where liquidity may have dried up for one reason or another,” he says.

Related: REITs Are Poised to End Year on High Note

GTIS Partners also is seeing strong activity on its platform. “If we look across the board at new acquisitions, dispositions and capital raised, I think 2021 will be one of our busiest years ever,” says Joshua Pristaw, partner and head of capital markets at GTIS Partners. Pristaw credits a number of factors to the investor inflows into private equity real estate funds. One is performance. Over the last 10 years, real estate has generally been a very strong performing asset class in institutional investors’ portfolio. Two,  is the denominator effect. Institutions tend to allocate a percentage of assets to alternatives. As the overall valuation of portfolios has risen, that frees up more capital to invest in real estate. Three, investors have a strong appetite for assets that generate yield and income in a low interest rate environment.

A fourth factor fueling activity for GTIS is potential tax law changes. Among its various funds, GTIS manages the GTIS Qualified Opportunity Zone Fund. “Anytime you have an environment where there are increasing taxes or people are talking about changing the tax code, like what is contemplated in the Build Back Better Bill, tax advantaged products tend to go up in value and be more interesting,” says Pristaw.

GTIS announced in early December that its Qualified Opportunity Zone fund will have its final close on December 31. So far, the fund has raised $450 million in capital from family offices, RIAs, and directly from HNW individuals, which ranks it as one of the largest opportunity zone funds raised to date.

Bain Capital is the latest example in what has become a proliferation of $1 billion dollar funds. In recent weeks, Harrison Street closed on a $2 billion fund and Kayne Anderson Real Estate also closed on a $2.75 billion fund.

According to an analysis by New York-based advisory services firm Alvarez & Marsal, the average private equity fund size was about $457 million in 2008. It dropped significantly after the Great Financial Crisis to a low point of $280 million in 2012. Over the past decade, average fund size has experienced a “hockey stick” shaped jump to about $800 million in 2021.

Another reason for increasing fund size is the expansion of the asset class, notes Hameer Vaid, a senior director in the private equity performance Improvement group at Alvarez & Marsal.

Traditionally, private equity real estate funds played in four or five major food groups—apartments, hotels, office, retail and industrial. Increasingly, there has been expansion into other property types such as logistics, data centers, medical office and others. “All of those accretive opportunities have come to play over the last 10 years, which has put a focus on better yields and increased returns on an individual asset class basis versus an aggregate,” says Vaid. That has attracted more dry powder from investors that are looking to diversify real estate investments across different property types, and that fundamental change in weighting has contributed to more capital inflows and larger fund sizes, he adds.

In addition, the type of investing within funds has expanded. Over the last two or three years, there has been increased activity in mixed-use developments across the board with components such as residential, office, retail, parking and transit. “That requires multi-faceted and higher capital tranches, and we are seeing an increase in the average fund size as a result,” says Vaid.

At the same time, there also has been greater consolidation among managers over the past couple of years, notes Vaid. Niche players have either had an opportunity to be consolidated or have taken advantage of their own M&A strategy. Overall, that is creating larger AUMs. So, from a reporting perspective, consolidation is another reason why funds are seemingly getting bigger, he adds.

According to Preqin, the top three strategies attracting the most capital in 2021 are opportunistic with $115.6 billion in capital raised this year; value-added with $97.2 billion and real estate debt at $60 billion. Yet different groups are investing all across the risk-return spectrum. “We see continued increase in credit as a way of being a fixed income replacement or complement, and opportunities in the core and core-plus lending space to deliver returns that are a fair bit above traditional fixed-income assets,” says McNamara.

For those that are principally looking for income with modest principal appreciation in a core-like return execution, investors are drawn to “2.0 or 3.0” strategies, adds McNamara. For example, ODCE funds started to move into a 2.0 phase several years ago with certain funds taking overweight strategies in sectors such as logistics and single-family rentals versus office and retail allocations that have traditionally dominated core strategies. Now 3.0 is moving more intentionally into other growth-oriented sectors such as life sciences, student housing, self-storage, cold storage and single-family rental properties, he says.

One of the trends to watch in 2022 and beyond will be the multiplier effect of public infrastructure spending and the Biden administration’s Build Back Better plan on private real estate investment opportunities. Infrastructure investment could fuel more public-private partnerships and mixed-use development related to new infrastructure projects, such as transit-oriented developments.  In turn, those opportunities are likely to drive more capital raising for private equity funds, as well as other private equity investment structures.

“I think the fundraising momentum is going to continue in 2022, and that goes back to performance,” says Pristaw. “What we’re seeing is a lot of transaction volume. So, people are selling things and returning money to their investors, and they will continue to reinvest and allocate more money as long as their experience has been positive.”