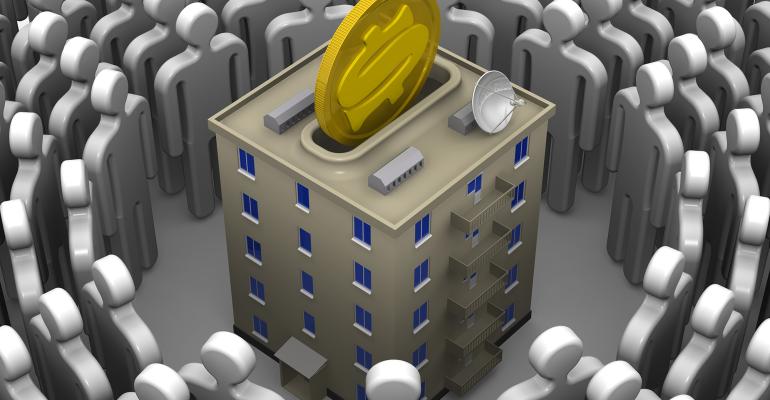 Institutions Have Shifted to Multifamily, Industrial and Data Centers in Their Real Estate Allocations

While once institutional allocations were weighted towards retail and office, they have responded to long-term structural shifts and refocused on industrial, multifamily and data centers.

Institutional investors have shifted with the times and honed in on the sectors that have outperformed the broader commercial real estate market in recent years, with multifamily, industrial and data centers topping the list of investor preference according to the results of the first WMRE Institutional Investor Survey (brought to you by Yardi).

Survey results show that institutions are most likely to prefer investing in multifamily (67 percent) and industrial (47 percent), followed by data centers (36 percent).

“Since the GFC, multifamily and industrial have had tremendous demographic tailwinds, and COVID added after-burners,” says Jeff Adler, vice president, Matrix at Yardi. That sentiment also is reflected in sales data. Multifamily assets represented about 41 percent of all property transactions with $154.6 billion in sales during the first half of 2022, while industrial had the second highest volume at $74.6 billion, according to MSCI Real Assets.

Although office and retail have traditionally been considered part of the four major food groups for institutional investors, both office and retail rated low by respondents at 14 percent and 12 percent, respectively. The general premise driving demand for office was that people needed to go to one central physical location to do work, notes Adler. “COVID blew that apart. We’re still in the early innings of trying to figure out how to put all of that back together, and it’s not going to be the same as it was,” he says.

However, it is noteworthy that within the office world, there are two niches that are absolutely out-performing general office—life sciences and medical office, notes Adler. Life sciences rated favorably among one-third of respondents and medical office at nearly one-fourth. The challenge for institutions is that it can be difficult to access life sciences as it’s a very small segment of the overall office stock. Medical office also is performing well with strong demand drivers due to the baby boomer population that likely will have more demand for medical services as they get older. Although retail rated low in the survey, grocery-anchored centers continue to perform well, while the mall sector is working to reinvent itself and it does show signs of stabilizing, notes Adler.

Views on preferred property types also might reflect the evolution occurring within real estate portfolios. Traditionally, 1.0 executions were overweight in office and retail, whereas 2.0 executions have a greater emphasis on logistics and residential. According to says Bernie McNamara, head of Client Solutions at CBRE Investment Management, the focus for many institutions is currently on 3.0 portfolio strategies that focus on increasing allocations to logistics and residential as well as other growth sectors, such as self-storage and seniors housing.

Institutions typically view funds as an efficient way to get diversified access and exposure to certain sectors and subsectors, and then use direct investments where they have more control as a complement to those fund strategies, notes McNamara. In terms of other formats that are on the rise, more investors are taking an “all of the above” approach that helps them to reach target allocations, he says. For example, that might include deploying capital into public REITs. There also can be both tactical and strategic reasons why investors are embracing different vehicles, such as using public REITs to get access to growth sectors that might be harder to access at scale through direct investment, such as life sciences or SFR, he says.

The full version of the WMRE institutional investor market research will be published in September.

Survey methodology: The WMRE Institutional Investor Survey (brought to you by Yardi) was conducted via an online survey distributed to WMRE readers in August 2022. The survey results are based on responses from 194 participants. Survey respondents represent a cross-section of real estate industry participants, including 29 percent who identified as an HNW family office investor or advisor, 21 percent as a private REIT or private real estate investor and 20 percent affiliated with a pension fund, institutional investor or life insurance company. More than half (53 percent) described their role as an owner/partner/president/chairman/CEO or CFO-level executive. Respondents operate in all regions with 58 percent active in the East, 52 percent in the South / Southeast / Southwest, 42 percent in the West / Mountain / Pacific and 35 percent in the Midwest / East North Central / West North Central. Respondents are active across property segments, and most are involved in multifamily at 61 percent, office at 41 percent, industrial at 39 percent and retail at 36 percent.