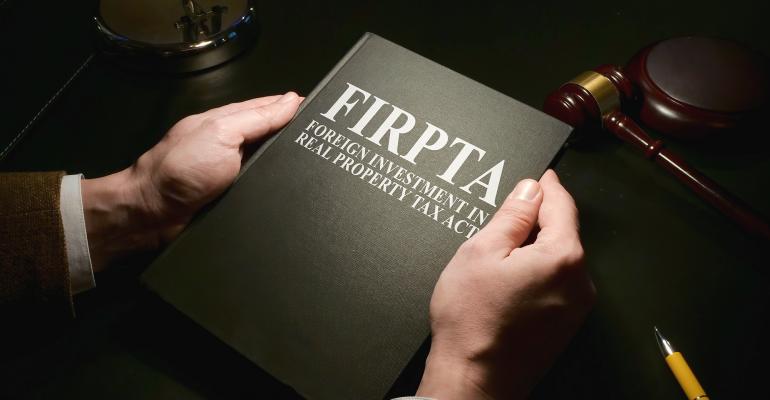 Today, as the United States emerges from the pandemic, we need to update our tax code to encourage investment, including from foreign investors. An increased flow of capital to our local communities can support a broad domestic recovery as well as support real estate sectors in critical need of support—such as workforce housing, defined as multifamily housing with rent less than 25 percent of mean family income in the surrounding area.

However, for potential foreign investors, the tax and regulatory burdens of FIRPTA remain a significant barrier, specifically to investment in public non-traded REITs, a rapidly growing product class providing investors access to the U.S. real estate market, and continue to inhibit much needed economic support to not just my district in New York but to communities across the country.

For the last year, Darin Lahood (R-IL) and I have partnered to develop a bi-partisan solution to modernize the tax code through legislation that will advance parity between public non-traded REITS and exchange-traded REITs in the Internal Revenue Code, and in April 2021, we introduced H.R. 3123, The Parity for Non-Traded REITs Act, which we’re calling on our colleagues to enact through this fall’s reconciliation process.

Related: U.S. Apartments Have Risen to the Top of Foreign Investors’ Wish Lists

FIRPTA originated as a response from Congress to rising concerns with foreign investors buying U.S. real estate in the late 1970s. However, over the last few decades, as these concerns have abated, the value of additional capital flow into areas such as workforce housing has taken center stage.

As such, in 2015, Congress passed the Protecting Americans from Tax Hikes Act (PATH Act), which made several important changes to the FIRPTA rules. In whole, these changes made the application of FIRPTA for investment into U.S. real estate through publicly traded REITs less burdensome and more attractive to foreign investors and resulted in a significant increase in foreign investment in U.S. real estate.

The PATH Act changes did not apply to public non-traded REITs, however, which are REITs registered with the U.S. Securities and Exchange Commission (SEC) and sold to investors through financial advisors.

While there was little foreign investor interest in public non-traded REITs in 2015, the investment vehicle has evolved since the passage of the PATH Act by offering increased liquidity, price transparency, and governance standards. Today, many internationally recognized financial institutions have entered the space—offering and managing public non-traded REITs—generating broad interest from foreign investors, both individuals and institutions.

The bill in Congress now would make investment in non-traded REITs, and ultimately workforce housing, significantly more appealing for foreign investors with only a miniscule cost—just $36 million over 10 years according to a private estimate—to the federal government.

Now is the time to update the tax treatment of public non-traded REITs and create parity with their traded counterparts that will encourage substantial investment into the U.S., bringing critical economic opportunity, job growth and support for affordable housing to our communities.

Representative Tom Suozzi, trained as an attorney and CPA, is the Congressman representing the Third Congressional District in New York. He is a member of the powerful House Ways and Means Committee, the chief tax-writing committee of the House of Representatives, serving on both the Oversight and Tax Policy subcommittees. Congressman Suozzi is also the Vice-Chair of the bipartisan Problem Solvers Caucus and Co-Chair of the bipartisan Long Island Sound Caucus.