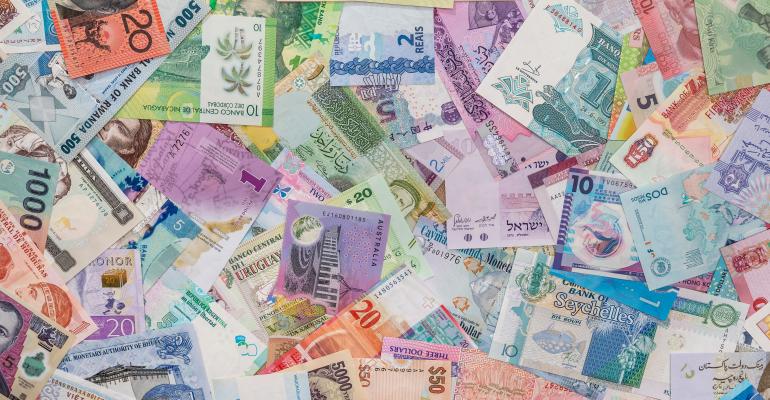 The lower costs could lead to an uptick in foreign investment in U.S. real estate.

The drop in interest rates is creating favorable ripple effects across the commercial real estate market in terms of lowering the cost of capital. Some foreign investors could also cash in on hedging costs that have moved significantly lower over the past several months.

The big question is whether lower hedging costs will motivate foreign investors to be more active buyers in U.S. commercial real estate. “We do believe it will spur more foreign investment into the United States,” says Spencer Levy, chairman of Americas Research and senior economic advisor for real estate services firm CBRE.

Hedging costs have shifted markedly in the past year along with declining Treasury rates and weakening of the U.S. dollar. Last November, when the U.S. 10-year Treasury rose to 3.2 percent, hedging costs from foreign capital going into the U.S. from Europe and other countries became very, very expensive, notes Levy. As an example, a German pension fund investor might have had to pay about 3.5 percent of the total investment cost per year simply to equalize the value of the Euro dollar vs. the U.S. dollar.

In certain circumstances, those hedging costs did create a drag on foreign investment decisions. “The segment where it had the greatest impact was in core investing,” adds Levy. Going in cap rates on core assets were already extremely low, which made it challenging for foreign investors to make the case for buying a property at, say, a 4.0 or 4.5 percent cap rate when their hedging costs were 3.5 percent, he says. So, core is the sector that now could be most positively impacted by the improvement in hedging costs.

Hedging costs are an important bellwether to foreign investor appetite for U.S. real estate as it impacts some of the largest commercial real estate investors in the world, notably foreign pension funds and global pension fund advisors. Yet not all foreign investors are required to hedge against fluctuations in value between their home currencies and the U.S. dollar. Those that don’t include private equity investors and sovereign wealth funds. 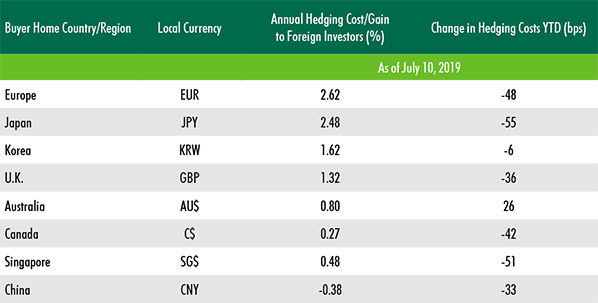 “That is a big deal and a lot of money when you’re dealing with investments in the $100 million-plus range,” says Levy. In addition, with the exception of a rise in hedging costs for Australia, there are a number of countries across the board that are likely to benefit from more favorable hedging costs, he adds.

The shift in hedging costs is due to changing expectations on Fed monetary policy, which have resulted in declining Treasury rates and a weaker U.S. dollar. Even before the Fed announced its 25-basis-point rate cut on July 31, the 10-year Treasury dropped to about 2.0 percent, and following the rate cut, has moved below 1.8 percent. Although commercial real estate investors tend to focus on the 10-year Treasury as a key metric to set permanent debt financing rates, hedging costs are more closely linked with short-term rates, such as the 1-year Treasury. The 1-year rate has dropped from 2.7 percent in November to about 1.8 percent currently.

Yet some industry observers are more cautious about the potential impact lower hedging costs could have on boosting foreign buying. “Currency hedging costs are certainly something to monitor, but they don’t tell the entirety of the story,” says Heidi Learner, chief economist at real estate services firm Savills. Foreign investors buying U.S. commercial real estate generally have a holding period that is much longer than a year. Foreign investors also take a variety of factors into account when it comes to analyzing cost of capital and cross-border investment opportunities, such as where the capital is coming from to finance the acquisition.

It may be the case that while hedging costs have gone down, prospects for future returns have also weakened, notes Learner. “So, I would not expect a narrowing of interest rate differentials to all of a sudden lead to an increase in activity,” she says. As an example, the value of the Chinese Yuan has deteriorated recently, falling to a rate of about 7 to 1 against the U.S. dollar, meaning that U.S. asset prices have become more expensive, notes Learner.

The volume of cross-border acquisitions has been somewhat subdued this year. The rolling 12-month total of $78.8 billion is the lowest level since mid-year 2018, according to research firm Real Capital Analytics (RCA). “I think there is a bit of a pause in the market from both foreign and domestic buyers,” says Learner. That doesn’t mean that deals aren’t getting done. However, there hasn’t been much of an adjustment in cap rates relative to the decline in interest rates. Investors are taking a closer look at strategies and hold periods in the context that there might not be further cap rate compression and it’s not clear what the prospects are for NOI growth in what appears to be a slowing economy, she adds.