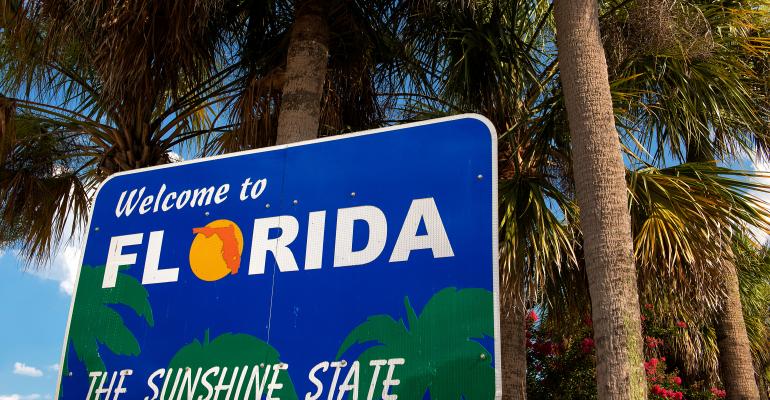 The state netted $16 billion in adjusted gross income from in-migration in 2018.

Florida netted $16 billion in adjusted gross income from people moving to the Sunshine State in 2018, making it the country’s top beneficiary for the sixth straight year, according to Internal Revenue Service data released Tuesday. The net economic benefit from migration increased 3% from $15.5 billion in 2017.

The figures show the strength of Florida’s appeal -- not just its warm weather and growing cities, but also its lack of state income tax. While Florida has been a magnet for retirees for decades, real estate companies and government and development officials have also found success pitching the state to a younger generation.

The IRS figures are the first to reflect the net migration of personal income since the new tax law went into effect. The Sunshine State was $12.5 billion ahead of the next strongest state, Arizona, in benefiting from migration. The biggest losers were New York and California, which bled $9.62 billion and $7.98 billion, respectively.

Conservative economists Arthur Laffer and Stephen Moore, once a Federal Reserve board nominee, predicted in the Wall Street Journal in April 2018 that New York and California alone would double their pace of tax-related out-migration to 800,000 residents over three years.

Still, the law’s overall impact in the data is negligible so far. The net migration of income to Florida fell short of the $17.2 billion record in 2016. New York’s net out-migration declined slightly in 2018 from the previous year, while Connecticut’s plunged to $1.13 billion, the lowest figure in four years, from $2.12 billion in 2017.

The IRS compiles the migration data based on filers who change the addresses on their individual returns.

To contact the reporter on this story: Jonathan Levin in Miami at [email protected].