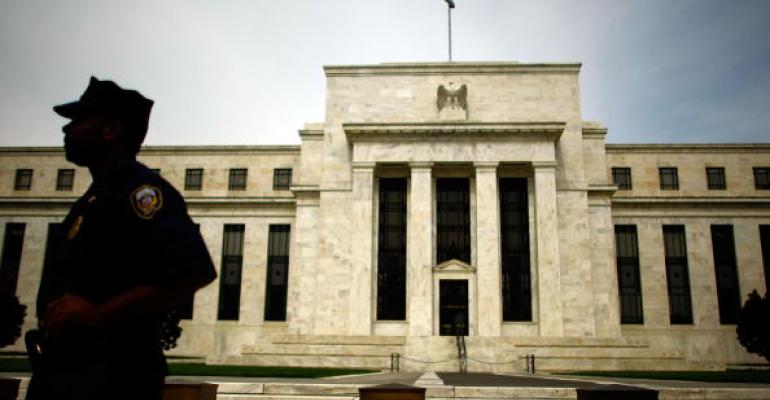 (Bloomberg Opinion) -- Ask just about anyone on Wall Street what worries them the most, and corporate leverage will most likely rank among their top fears. In August, Bank of America Corp. surveyed 224 fund managers with a combined $553 billion in assets and found that a record 50% of them were concerned about excessive debt on company balance sheets.

It’s not hard to see why that’s the case. For one, a growing number of well-known U.S. companies are now rated triple-B, potentially just one economic downturn from becoming junk and facing a spike in borrowing costs. But at least that’s more or less out in the open. More ominous is the explosive growth in the market for leveraged loans and collateralized loan obligations. Global regulators haven’t found a way to quantify the threat they may pose to the financial system in a worst-case scenario. At least not yet.

The Federal Reserve is apparently ready to take a stab at measuring that risk itself. It announced last week that as part of its annual stress tests, Wall Street’s biggest banks must prove they can withstand a “wave of corporate sector defaults” and outflows from leveraged-loan funds that cause steep enough price declines to flow through into CLO tranches. The scenario anticipates that such a sell-off would also spill over into other types of risky credit and private equity.

“This year’s stress test will help us evaluate how large banks perform during a severe recession and give us increased information on how leveraged loans and collateralized loan obligations may respond,” Randal Quarles, the Fed’s vice chairman for supervision, said in a statement. The banks have until April 6 to submit their plans; the results will come out at the end of June.

The message from the Fed to Wall Street is quite clear: Leveraged lending is seen as a big risk and now is the time to look carefully through your books to make sure you haven’t missed any potential exposures. The central bank seems to believe it staved off a recession with its three quarter-point interest-rate cuts last year. Chair Jerome Powell’s recent refrain is that the economy and monetary policy are now in a “good place.”

In September, though, he warned that the elevated level of corporate debt is “a real issue” and could serve as an “amplifier” of any slowdown. Boston Fed President Eric Rosengren dissented on lowering rates last year in part because of financial stability concerns around “near-record equity prices and corporate leverage.” The special focus on leveraged loans in the 2020 stress tests can likely trace its origins back to these remarks.

Yet I wouldn’t hold my breath for significant revelations from this exercise. For one thing, announcing that leveraged lending will be a crucial component of this year’s test creates the appearance that the Fed is tipping off Wall Street in advance of the exam. This kind of transparency is just one of the ways in which the Fed softened its process: It also eliminated the “qualitative objection,” which gave the Fed the power to fail even well-capitalized banks if it judged that their handle on risk wasn’t adequate. Overall, the fact that the Fed’s stress tests are arguably easier than before minimizes how much markets might learn from this go-around.

It’s also worth remembering the findings from the Financial Stability Board’s December report on the leveraged-lending market. Here’s what the global regulatory organization that comprises central banks, finance ministries, international bodies and regulatory authorities managed to conclude about stress-testing credit-risk exposure at banks:

“There are inherent difficulties in modelling what the impact of a severe yet plausible scenario could be on complex debt products that have been originated under loose credit conditions. Furthermore, the cross-border dimension of the risks may not be fully covered by the stress tests, as interconnectedness is challenging to assess for individual jurisdictions.”

As I wrote at the time, this does not inspire much confidence. Quarles just so happens to be the chair of the stability board in addition to the Fed’s regulation chief. It’s a smart move for the Fed to test whether banks can withstand a global recession in which the markets for corporate debt and commercial real estate are hit especially hard. But as the board said, it’s hard to accurately model for the worst case given the unprecedented nature of credit markets in the post-financial crisis era.

There’s no harm in trying, though. The stability board report provided interesting figures on banks’ exposure to leveraged loans and CLOs relative to their capital adequacy ratios, for instance. Any additional insight into the leveraged-lending market, and just how intertwined it is with the biggest U.S. banks like JPMorgan Chase & Co., Citigroup Inc. and Goldman Sachs Group Inc., would go a long way toward confirming or assuaging investors’ fears. It’s the unknown that’s scary.