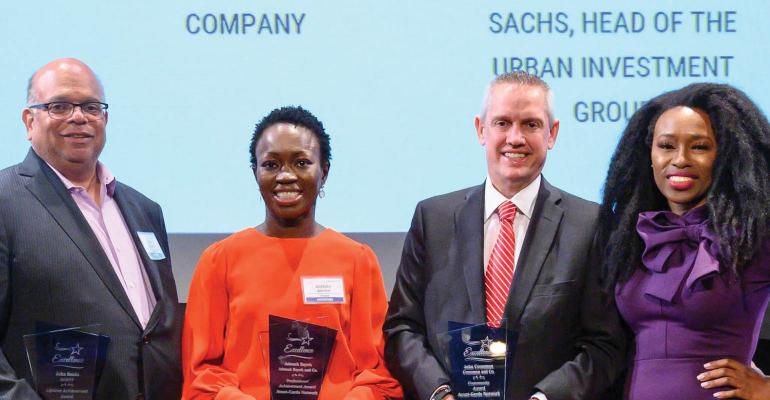 Is the CRE Industry Getting Any More Diverse?

Commercial real estate is among the least diverse industries on the planet, according to Adeola Adejobi, attorney and founder of New York-based Avant-Garde Network, an events company that advocates for diversity and inclusion for professionals of color. In July, Avant-Garde hosted its first Diversity in Commercial Real Estate Conference at Columbia University in New York City. The event drew more than 600 attendees to hear some of the industry’s top players of color, including former Real Estate Board of New York President John A. Banks, WeWork’s Global Head Craig Robinson and Goldman Sachs Partner and Urban Investment Group Head Margaret Anadu, among others. NREI recently spoke to Adejobi about some of the key takeaways from the event and the state of diversity in commercial real estate today.

NREI: Can you talk a little bit about the Avant-Garde Network and how it supports diversity and inclusion?

Adeola Adejobi: We engage with about 5,000 people annually through our events, conferences and forums talking about opportunities in communities of color. That allows us to bring together a strong talent pool to talk about a lot of these topics and opportunities. About 78 percent of our group have advanced degrees and 100 percent of our group have college degrees, so it’s a very ambitious group looking for opportunities. We found that a lot of companies are lacking in diversity or even innovative ways to engage this community.

NREI: How did the lack of diversity in the commercial real estate first register on your radar screen?

Adeola Adejobi: I had been interested in real estate for some time and then I actually participated in a program called REAP (Real Estate Associate Program), a program that gives an overview of what the opportunities are in the commercial real estate industry. After participating in the program, I continued to network and develop myself in the commercial real estate community and one thing I found, again, was that there was a strong lack of diversity there and that there were a lot of people who also weren’t exposed to it. So, with this conference—even though it was the inaugural conference—I was able to put together the largest conference in the nation that focuses specifically on diversity in commercial real estate.

NREI: Were there any surprises for you?

Adeola Adejobi: [Many of] the speakers [stated] that they’ve been in the industry for 30 years and this is the largest amount of diverse people that they’ve seen together around commercial real estate. I thought that was amazing. There aren’t that many people [of color] in terms of the leadership positions within the industry. So, a lot of the takeaway was that we need to continue to create exposure and provide opportunities around that. What that really requires is for these commercial real estate companies to really change their approach and where they’re looking for talent in addition to making it a priority.

NREI: What were the main topics addressed at your diversity conference?

Adeola Adejobi: We really talk about tangible industry issues that are happening because the commercial real estate industry is very vast and wide, so we had topics on private equity, real estate finance, development, commercial leasing and things like that that are very specific. We wanted to provide our audience with information that allowed them to understand the marketplace more and how to position themselves in some of those areas.

NREI: Real estate mogul and activist Don Peebles recently launched a $500 million fund for women and minority developers and has stated publicly that it is the lack of access to capital holding these groups back. Do you agree?

Adeola Adejobi: I think it’s an amazing initiative that he’s starting and I think that obviously there needs to be more of that, not only from private companies like Don’s, but also federal, state and local governments need to facilitate and create more equitable access to capital so that people of color can have more of an opportunity to participate in commercial real estate development.

We did have master classes about [real estate finance], as well as companies that are specifically focused on providing people of color access to capital for their company. With the master classes, the goal was to provide attendees with tangible hard skills, hard takeaways that they could use and implement today.

NREI: Commercial real estate is often a family business, marked by the preservation of intergenerational wealth. In your opinion, what are the main barriers for people of color in breaking into the industry at the business owner level?

Adeola Adejobi: I think the reality for communities of color is that they have historically been left out and also have not had the opportunity to build wealth through real estate due to lack of access due to redlining and due to lack of capital. This applies to women as well, also getting paid less for equal work, so it makes it even harder to pull together the initial capital to start doing deals. While a lot of real estate companies have been family-owned and operated, there are strong opportunities for people of color to get into the industry with access to capital.

NREI: Can you talk about the benefit of partnerships between minority developers and established firms?

Adeola Adejobi: I think that partnerships are important and I think that it doesn’t necessarily need [to be] from a development standpoint. It can also be from a talent standpoint, in terms of companies looking for diverse talent to hire within their company. New York has done some work around that in terms of contractors and subcontractors and it’s generally where people get their initial opportunities. But I do think that is a way to start to bridge that gap.