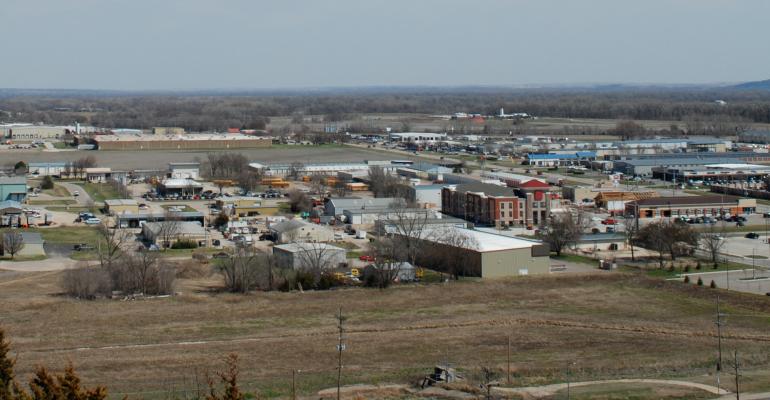 Yields remain greater in smaller MSAs, although the cap rate spread between market types is shrinking.

Apartment investors are jumping at the chance to buy properties in Manhattan at 6 percent cap rates—Manhattan, Kansas, that is. Buyers that used to dismiss such tertiary markets as “flyover country” are now stopping to take a second look.

Capital chasing better yields and growth opportunities in secondary markets is spilling over into even smaller cities. According to Real Capital Analytics (RCA), investment sales volume in tertiary markets jumped to $147.0 billion in 2021. Although tertiary markets account for a smaller percentage of the overall sales market at about 18 percent, last year’s sales volume represented a 56 percent increase over the $94.2 billion in sales transactions recorded in 2019. (RCA defines tertiary markets as those outside the top 40 MSAs it tracks as major and secondary metros.)

Related: WMRE's Common Area: What to Expect From CRE in 2022

Investors may not always agree on the exact definition of a tertiary market, but there is growing interest in opportunities in smaller metros beyond the top 30 or 40 MSAs that include the likes of Columbus, Ohio, Jacksonville, Fla., Louisville, Ky., Omaha, Neb., and Boulder, Colo., among others. The biggest motivator is yield, especially as cap rates in gateway and secondary cities have dipped below 4 percent for most in demand assets.

“We’re in a low-yield environment and people are reaching for yield. So, if you can get a higher cap rate in some of these tertiary markets, that is very attractive to investors,” says Joseph Biasi, a senior consultant at the CoStar Group. “The only trick with a tertiary market is that people are a lot less familiar with them, and it is a lot harder to get foreign dollars there,” he adds. According to CoStar, transaction volume in tertiary markets in 2021, generally those outside of the top 25 metros, was 10 percent higher than 2019 levels as compared to a 14 percent increase in secondary markets and a decline of 18 percent in primary markets.

Related: How Five CRE Investment Firms Are Planning Their Strategies in 2022

Competition for assets in Sun Belt states such as Florida, Texas and the Carolinas is pushing cap rates to almost ridiculously low levels, notes Tyler Hague, a senior vice president in the Chicago office of Colliers International. Hague heads the firm’s Midwest multifamily investment sales group. “Because of that, buyers that would have never come to secondary markets in the Midwest, let alone tertiary locations, are starting to explore those opportunities,” he says.

Hague’s team currently is selling multifamily assets in metros such as Columbus, Louisville, Ames, Iowa, and Manhattan, Kan., where the team has sold over 1,000 units in the past year. Investors buying apartments in tertiary markets generally are finding discounts of 50 to 100 basis points compared to similar quality assets in bigger metros, notes Hague. For example, an apartment in Manhattan, Kan., that sells at 6 percent would go for 4.75 percent in nearby Kansas City, he says.

Net lease investors have been ahead of the curve when it comes to moving into tertiary markets, largely because the assets they’re buying are backed by credit tenants with long-term leases, such as Walgreens, AutoZone and Taco Bell, that reduce investment risk. However, the pool of buyers these days is larger with interest from investors across the spectrum from high-net-worth individuals and family offices to REITs and private equity funds. One of the drivers for that is simple supply and demand. There is more capital chasing too few deals, which is prompting investors to widen their searches, notes Matthew Mousavi, a managing principal in the national net lease group at SRS.

SRS recently sold a net lease Home Depot distribution center in Salem, Ore., for $50 million at a cap rate of about 5 percent. The deal attracted interest from both private buyers and institutions from around the country. The winning bidder was a high-net-worth investor, which also reflects the shift in the bidder pool, adds Mousavi. “Twenty years ago, that property would have sold to an institution, a pension fund or a life insurance company. Now we have private individuals buying $50 million net lease deals in tertiary markets,” he says.

Technology and greater transparency also have made it easier to buy properties in smaller cities. An investor in New York that is interested in a property in Ohio can use Google Map's street view option to look at that site on their phone or tablet, and they can easily pull market and sales comp info. “It’s a vastly different technology for our business that makes those markets more efficient and brings in more capital,” says Mousavi. Real estate is still a hands-on business and people need to go look at the physical asset, but it is easier than ever to assess a property remotely, he adds.

Traditionally, larger institutional investors have been wary of the greater risk and reduced liquidity in smaller metros, as well as the challenge of being able to place capital at scale. However, many smaller metros are posting strong growth, which has been further fueled by the pandemic and remote working.

According to the NAIOP research brief, How the Other Half Builds: Small-Scale Development in Tertiary Markets, tertiary markets are home to about half the U.S. population and represent a significant share of the commercial real estate market. The brief noted that while higher exit risk may discourage developers with shorter time horizons from entering a tertiary market, higher yields and less competition tends to favor longer holding periods in smaller markets.

“Investors are attracted to the very compelling returns and good fundamentals that are driving strong long-term returns in tertiary markets. Additionally, strong job growth and continued in-migration from gateway markets are contributing to the growth of secondary and tertiary markets,” says Matthew Lawton, executive managing director and investment sales and advisory platform leader at JLL Capital Markets. However, investors are being very selective and not just painting these markets and submarkets with a broad brush. They are applying similar strategies as the ones employed in primary markets, such as looking at employment hubs and demand drivers such as tech, STEM, “eds and meds” and state capitals, he says.

One question is whether investors are getting adequately compensated for the risk. “I’m kind of surprised to see some of the yields investors are accepting in tertiary markets,” says Mousavi. Those investors chasing yield almost have no choice but to go to tertiary markets. However, there also are those investors that have looked at tertiaries that don’t feel that the yields justify the risk and would rather buy a property at a 3 or 4 percent cap rate in a top MSA rather than accept a 5 percent or 6 percent cap rate in a smaller city with greater risk, he says.

Cap rates on net lease assets in a top 25 MSA used to be 5 percent compared to 8 percent or higher for tertiary markets, notes Mousavi. These days net lease assets in tertiary markets might be priced at a 5.5 or 6 percent cap rate compared to a 4 or 4.5 percent for a top tier market. The yield is not as great, but investors are still looking to tertiaries for that higher yield, he says.