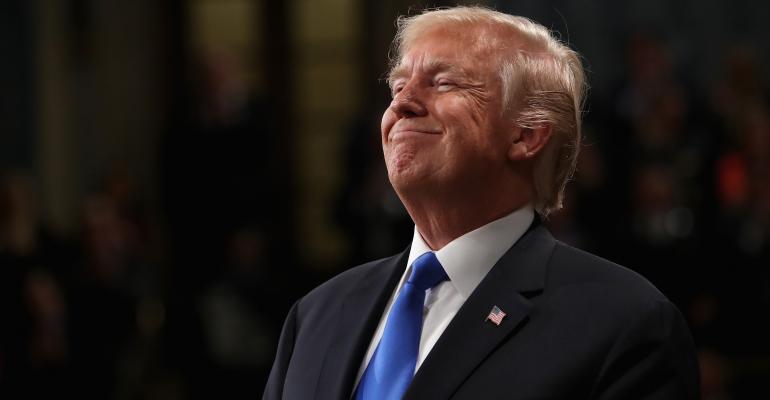 Can Depreciation Explain the Magnitude of Trump’s Reported Losses?

Last week the New York Times made waves reporting, after combing through a decade’s worth of tax transcripts that it obtained, that Donald Trump reported $1.17 billion in losses in the years 1985 to 1994.

“In fact, year after year, Mr. Trump appears to have lost more money than nearly any other individual American taxpayer," The Times found when it compared his results with detailed information the I.R.S. compiles on an annual sampling of high-income earners. His core business losses in 1990 and 1991 — more than $250 million each year — were more than double those of the nearest taxpayers in the I.R.S. information for those years, according to the newspaper.

The paper “received the information contained in the returns from someone who had legal access to it.” It was then able to match the results with a public database maintained by the IRS with information on top earners. The findings dovetailed with previous reporting it had done into the origin of the president’s wealth.

Both in the Times piece and then again on Twitter, President Trump pointed to the practice of depreciation as being the primary explanation for the scale of reported losses.

....you would get it by building, or even buying. You always wanted to show losses for tax purposes....almost all real estate developers did - and often re-negotiate with banks, it was sport. Additionally, the very old information put out is a highly inaccurate Fake News hit job!

In turn, billionaire real estate investor Sam Zell said that he and other real estate developers had used similar deductions to report losses during those decades.

“For a real estate guy to have huge deductions, who owns a lot of brick-and-mortar, is not unusual,” he said in an interview on Bloomberg Television from the SALT conference in Las Vegas.

But is the use of depreciation alone enough to account for that scale of reported losses? Tax experts NREI spoke with said that while it’s certainly technically possible—and legal—to use depreciation to account for those kinds of losses, it’s probably not the full explanation. However, without seeing the full returns from Trump from those years or the filings for any pass-through entities that may have owned the assets, it is impossible to know for sure.

Most notably, however, the $1.17 billion figure very likely doesn’t represent a true total of money lost. It very well could be the result of reporting paper net losses, due to concepts like depreciation, in years Trump had net income.

“His response is a legitimate response, but what we don't know without looking at the details is what caused the losses,” says Marc Wieder, a partner and co-leader of the real estate group at Anchin, a New York City-based public accounting firm. “We can't say they were directly attributable to depreciation or amortization. We can't tell without looking at the details. And what gets even more difficult with flow-through entities is that he gets a form K-1, which shows his share of income or losses. But really we would need to get down to the entity level and see what positions the entities took. All he's getting is the form saying ‘this is your share.’ ... We need to see the tax positions the entities took to see if the losses were legitimate or not…. Without his returns, you don't know what entities even are.”

The concept behind depreciation is that it is a way to incentivize investment. Owners of real estate can write down a certain percentage of the value of a building annually and use that as an offset for any reported income. Typically, the value of a commercial real estate building is depreciated over 39 years—roughly 2.5 percent per year. But at times owners have been allowed bonus depreciation—at rates that have occasionally gone up to 100 percent—enabling them to write down the value of assets faster and offset more income.

“Real estate is capital intensive and there is a significant amount of depreciation,” says Marc Wieder. “Direct write-off of improvements, depreciation and accelerated depreciation are things that have existed for a long time.”

So, for example, if an investor acquired a building for $20 million and is allowed to depreciate it at a 10 percent rate, that would be a $2 million reported loss. If in the same year the owner had $1.5 million in income, the result, for tax purposes, would be a $500,000 reported loss—despite the owner not actually losing any money.

However, one thing that appears to be missing from the decade of returns is any evidence of “depreciation recapture.” Take the $20 million building example. Say over time the owner depreciates $8 million worth of the building. For tax purposes, the basis in the property would be $12 million (the $20 million value less the $8 million in depreciation). But then the owner goes and sells the building for $23 million. That’s now a $11 million gain over the taxable basis. Of that, $8 million would then be taxed as ordinary income (representing the recapture of the value that had been depreciated). The remaining $3 million would be taxed as a capital gain.

In terms of Trump specifically, Ray Kingett, a tax manager at Sharp Financial Group, a full-service CPA firm based in Philadelphia, points to some of Trump’s dealings in Atlantic City as potentially accounting for the kinds of losses reported by the Times. For example the Taj Mahal project was constructed for about $1.2 billion and opened in 1990, financed primarily through the issuance of junk bonds. On a $1.2 billion project, a straight-line 39.5-year depreciation schedule would be $31 million annually, Kingett explains. However that timeline applies to structural parts. Fixtures and other items could be depreciated more rapidly—in a seven-year timeframe.

“I find it hard to believe it would just be depreciation,” Kingett says. “It may be, because he was involved in lots of investments. … But these types of non-cash items aren’t that apparent to someone that’s not in the real estate business. … I think with some of the items that are being published, these are complex issues at play. That $1 billion figure, is that just in losses from business not including any offsets? That’s what I’m not sure about with transcripts.”

A final important point on depreciation is that an investor can only depreciate 100 percent of the cost. The timeframe may vary depending on whether it’s typical depreciation or affected by bonus depreciation, but the total amount is the same. And once the asset has been fully depreciated it provides no tax benefits in future years of ownership.

Another explanation some have pointed to for the extent of Trump’s losses is that 1985 to 1994 coincided with a slump in the real estate market more broadly, which could explain some of the numbers. Indeed, many of Trump’s real estate plays during this time went sour, resulting in multiple rounds of bankruptcy.

But there is a reason that this too might not be a sufficient explanation either because there are conditions under which defaulting on a mortgage and turning a property over to a bank might result in needing to report income, rather than a loss.

Take another hypothetical example. An investor buys a building for $10 million, using $1 million of equity and $9 million of debt. During that time everything breaks even. The investor reports $2 million in losses due to depreciation. They decide the market is terrible and default on the mortgage and give the property back to the bank.

They started with $1 million capital and took $2 million in losses, so now their net loss is $1 million.

“Now you turn around and give it back to the bank,” Wieder says. “You owe the bank $9 million. It's as if you sold the building for $9 million. But now your basis is no longer $9 million. That $1 million of negative capital now becomes income to you. So you end up in a situation where you are giving up a property and have taxable income because you previously wrote off the investment.”

The bottom line? While the Times’ reporting advances the understanding of Trump’s business dealings, it’s not a replacement for seeing a full picture, including his tax returns.