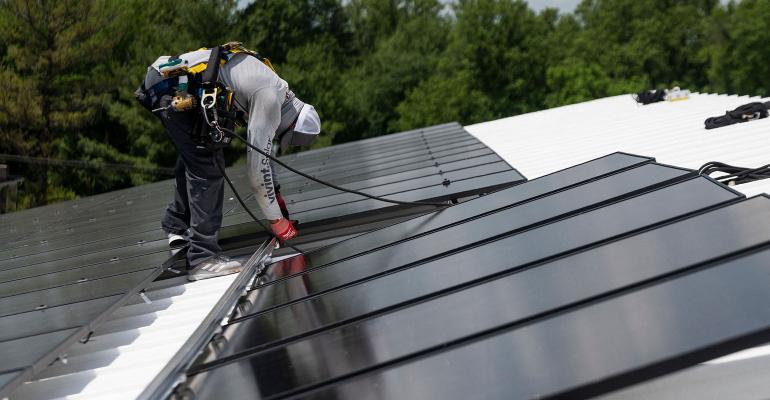 C-PACE Financing Takes a Big Step into the Mainstream

PACE programs are now operating in nearly half the states in the U.S. and only 14 have not passed legislation enabling the financing structure.

C-PACE financing has been gaining in popularity and new legislation set to take effect in New York City is expected to further catapult the use of the structure in retrofits and ground-up construction projects.

Commercial Property Assessed Clean Energy (C-PACE) financing has been on a sharp upward trajectory over the past several years with the cumulative amount of capital invested jumping from $111.2 million in 2014 to $2.07 billion through 2020. “It’s no longer accurate to say that C-PACE is poised for explosive growth. That growth is happening,” says Colin Bishopp, executive director of PACENation, a non-profit organization that works to expand access to residential and commercial PACE. “We’re in the early stages of really rapid growth for Commercial PACE.”

The growth is due to a convergence of factors. Two of the big drivers are greater awareness and access as more states and local municipalities ranging from Chicago to Tulsa get programs up and running. PACE-enabling legislation has been passed in 36 states plus Washington, D.C., and PACE programs are now operating in 24 states as well as the nation's capital. The pandemic also shined a spotlight on C-PACE as an alternative source of capital. Some states allow for the retroactive use of C-PACE, which enabled owners and developers to tap C-PACE financing to free up needed operating capital.

“Even though PACE is at a small scale nationally, it’s rate of increase has been dramatic,” says Thomas O'Connor, a partner, chair of the real estate finance group and a member of the real estate practice group at Duval & Stachenfeld LLP in New York City. Additionally, the focus on sustainable projects, reducing carbon footprints and ESG is providing a strong tailwind. “Investors and major institutions are looking for investments that are environmentally and socially centered, and PACE financing is right down the middle on that. This is ESG financing in its purest form,” he says.

First introduced about a dozen years ago, PACE is a financing mechanism that allows residential and commercial property owners and developers to access low-cost, long-term funding for energy efficiency, renewable energy and water conservation projects. Some jurisdictions also allow for PACE to be used to finance projects that benefit social good, such as seismic resiliency in California and wind resiliency in Florida.

The state passes the law enabling PACE financing, and then a program administrator—such as an economic development authority, city or private entity—operates the program and facilitates the use of financing by property owners and developers.

“It is absolutely going mainstream for a couple of reasons. You’re getting demand pull from governments as they begin to mandate certain requirements for energy efficiency and renewables,” notes Eric Alini, a managing partner at Counterpointe Sustainable Real Estate, a PACE lender. Property owners and developers also are feeling the push of incentives that PACE offers in terms of reasonably priced, low-risk, long-term financing. PACE offers long-term, fixed rate financing, generally 25 to 30 years, with current rates that typically range between 5 percent and 6 percent.

For example, Counterpointe SRE provided $13.7 million in mid-construction financing for a mixed-use multifamily project in suburban San Diego late last year at a rate of 6 percent. The Poway Outpost is a 53-unit multifamily properity with 44,000 sq. ft. of retail space under construction in Poway, California. The PACE-qualifying elements of the new construction project include seismic resiliency, HVAC, LED lighting, water conservation and building envelope measures. The non-recourse loan allowed for a delay in the first repayment up to 24 months, and also included greater than 20-year amortization. The C-PACE loan provided additional financing that also includes a $21 million construction loan.

PACE financing is not a loan or grant, but rather it is structured as a special assessment on the property’s regular tax bill and is processed the same way as other local public benefit assessments, such as sidewalks or street improvements. “It also is important to note that the capital comes from private investors,” says Alini. PACE is a public-private partnership between the state, county and tax collector to create a municipal lien financed by private capital. PACE doesn’t work in all cases, but it is a weapon in the quiver of a property owners that are looking for financing solutions for their capital stack, he adds.

Some borrowers are using C-PACE as a lower cost alternative to replace mezzanine financing in the capital stack. Compared to mezzanine financing, C-PACE tends to have easier terms, fewer documents and less risk of foreclosure. “The basic economics of a PACE loan are very compelling, and at the end of the day, people make deals that make sense, and PACE loans make sense for all of the players,” says O’Connor.

However, while a mezzanine loan is junior to the primary loan, such as a bank construction loan, the C-PACE loan is senior. That does create a hurdle for traditional lenders that require first position on a construction loan or mortgage. “It is not a sticking point, it is the sticking point and why C-PACE has had a slow rollout,” says O’Connor. PACE financing requires the consent of the mortgage lender, and first mortgage lenders are not inclined to consent to financing that is going to be paid in front of them. “As more and more lenders are willing to do that, I think there will be market pressure on other lenders to do so as well if they want to stay competitive,” he says.

Some industry observers believe that New York City could be a “game changer” in propelling growth for C-PACE financing. The commercial real estate market is impacted by what happens in New York simply due to the concentration of “who’s who” in real estate players and financial institutions based in the city, notes O’Connor. So, when the major institutions start participating in PACE, it can’t help but have a large impact on the country and further accelerate growth that has been occurring in other parts of the country, he says.

New York City passed PACE legislation in April 2019 around the same time it passed its Climate Mobilization Act, which requires buildings owners to spend substantial capital on retrofits to reduce carbon emissions to meet certain standards which begin to go into effect in 2024. “Knowing that building owners would have to spend money to comply with the Climate Mobilization Act, the city passed PACE as a way to try to help them,” says O’Connor. Since officially passing its PACE legislation in April 2019, New York City has been working to put its operating framework in place. The program is expected to go live sometime in the coming weeks.

Although New York City is getting a lot of attention, it is worth noting that Massachusetts, Philadelphia, Chicago (Cook County) and Anchorage all have opened for C-PACE financing in the past year. Atlanta also is close to launching. In addition, enabling legislation was passed within the last two months in both Tennessee and Montana.

“What we’re seeing is that PACE is a really effective financing tool in the commercial sector,” says Bishopp. “So, I think folks are going to keep looking for ways to use it to reduce carbon emissions and get more projects done.”