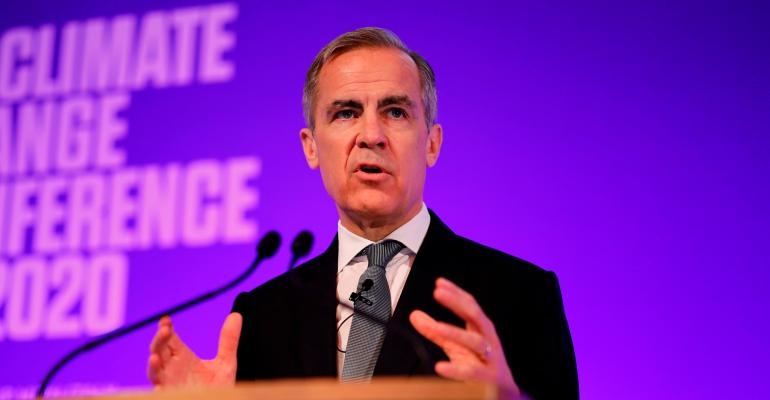 The alternative asset manager plans to raise as much as $12.5 billion for an investment vehicle to help businesses cut carbon emissions.

(Bloomberg)—Brookfield Asset Management Inc. said it has raised $7 billion for the initial close of its new impact investment fund, pulling in money from Singapore’s sovereign wealth fund and Canadian pension managers for an investment vehicle that will help businesses cut their carbon emissions.

The Toronto-based alternative asset manager said it plans to raise as much as $12.5 billion for the Brookfield Global Transition Fund, which would make it the largest of its kind to date as it pursues a growing list of opportunities.

Ontario Teachers’ Pension Plan Board and Singapore’s $281 billion Temasek Holdings will be significant initial investors, Brookfield said in a statement. Canadian pension funds PSP Investments and Investment Management Corp. of Ontario have also made meaningful commitments to the fund, Brookfield said, without disclosing how much each is contributing.

Brookfield wants to help accelerate the transition to net-zero emissions globally and will draw on its experience in renewable power and clean energy to guide its investments, said Mark Carney, the former Bank of England governor who is now Brookfield vice-chair and its head of transition investing.

The sheer volume of opportunities were much larger than Brookfield had originally anticipated and prompted the larger fundraising effort, Carney said. They range from reducing the carbon footprint of the servers at technology companies to the electrification of automobiles and their charging infrastructure, he added.

“The decarbonization opportunities are bigger and are coming sooner than we might have expected a few months ago,” Carney said in an interview. “This is a whole economy transition. So, it’s every sector. It’s every company.”

Brookfield, which has about $609 billion in assets under management, is just the latest firm to raise capital for an impact fund. Apollo Global Management Inc. is seeking to raise as much as $1.5 billion for a new fund that will focus on socially-responsible investments, people familiar with the matter told Bloomberg News this week.

That follows on moves by other private equity players, including KKR & Co., TPG Capital and Bain Capital, to jump into the sector in response to increased demand from institutions. Last year, private equity firms raised almost $4 billion for impact funds, the most for the strategy since 2017, according to data provider Preqin. If Brookfield were to raise the full $12.5 billion it is seeking, it would amount to nearly the total capital raised by buyout firms for impact funds over the past five years, Prequin’s data show.

TPG announced also announced the first close of its own TPG Rise Climate Fund Tuesday at $5.4 billion, and set a hard cap of $7 billion on total commitments that it expects to reach in the fourth quarter.

Connor Teskey, Brookfield managing partner and CEO of its renewable power group, said the company will help guide the transition to clean energy for companies that either lack the capital or the capabilities to start the transition to reduce their carbon footprints. Brookfield will leverage its experience in renewable energy operator to help them figure out strategies to reach their net-zero targets.

“While the numbers of the fund are quite large, they really are minuscule, drops in the bucket, in terms of the amount of capital that will be allocated toward decarbonization initiatives over the next few decades,” he said.

--With assistance from Sabrina Willmer.