Frequent contributor and columnist John Kador questioned whether a universal life insurance policy he purchased in 2007 continues to meet his current financial requirements. We asked a number of insurance experts to examine the policy and suggest the best course of action. This is Kador’s report on what the experts advised. In a subsequent article, Kador will report on the decision he made and its consequences.

In my 2016 annual statement, I noticed that the cash value of the policy was increasing slower than I expected. This surprised me because the agent’s projections led me to believe that the guaranteed 4 percent yield of the policy would be sufficient to pay for the costs of insurance and expenses (C&E) and provide growth in cash value. 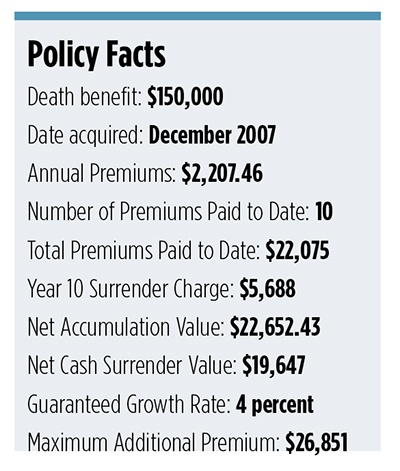 That was my first mistake—never believe projections.

It’s much more realistic to look at the guaranteed minimums because that is what almost everyone with policies like mine actually earn. I wish I had better understood that the chances of the cash value increasing by the projected amount was approximately zero. I definitely should have looked closer at the C&E and the surrender schedules—mistakes number two and three.

In fact, if I keep my policy as is, the increasing C&E will just continue to erode my cash value. To add insult to injury, the policy has surrender charges calculated over 20 years, which is significantly longer than those of similar products offered 10 years ago. But before I surrender the policy, I decided to take a deep dive into the intricacies of life insurance as an asset class, share my situation with four insurance experts and report on their recommendations.

Drop Face Value, Keep It, Add to It

I started with my own financial advisor of eight years (who did not sell me the original policy). My advisor, who asked not to be quoted because of his firm’s compliance policies, laid out a compelling case for keeping the policy. You should know, first of all, that my advisor hates the idea of me paying a $5,688 surrender charge in year 10. His advice is to keep the policy but drop the face amount by $50,000 and simply stop paying premiums. An immediate benefit: I will save the annual $2,881 premium. 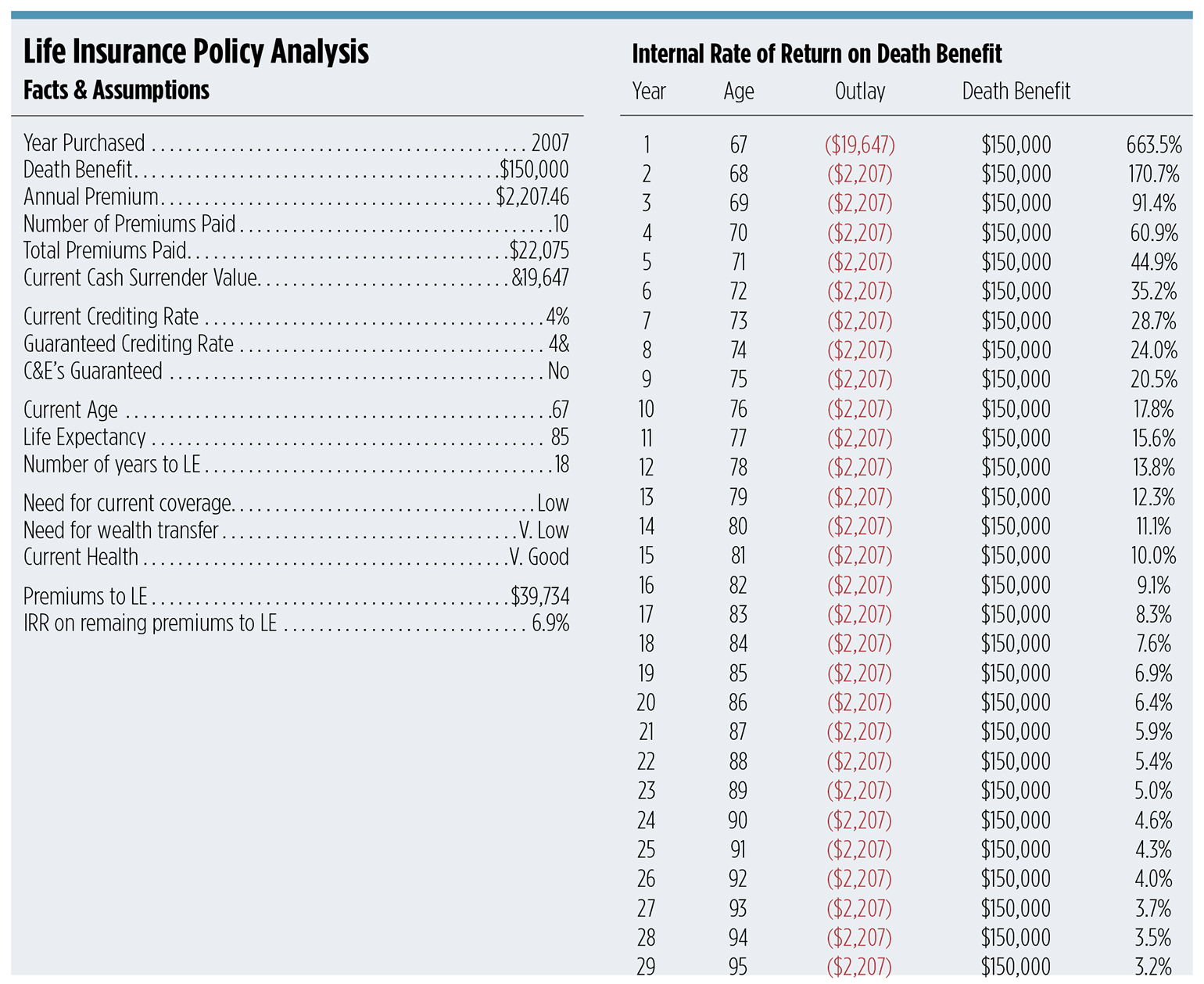 He walked me through the math and showed me that without paying another premium, I’d have permanent $100,000 life insurance at a cost much less than the term insurance I carry. Moreover, with the reduced death benefit, the interest would more than pay for the cost of insurance until about 10 years out, when the cost of insurance starts to get prohibitive. Without paying another premium, the policy value would definitely increase every year. And as the surrender schedule extinguished, the cash value would grow faster. By his math, the yield on the policy (including the surrender charge) would be 4.28 percent in year one.

For that reason, my advisor suggests I use this policy as a short-term safe money bucket because the yield is better than almost anything else out there. He further suggests surrendering the policy in five to six years when the rise in C&E becomes unmanageable and the surrender charges are lower. I’ll count this advice in the “keep” column.

Richard Myerson, principal at the Myerson Agency in Los Angeles, calculates that the yield is actually higher than 4.28 percent. Myerson estimates that the Internal Rate of Return on continued premiums to my life expectancy (age 85) is 6.9 percent. Of course, Myerson’s rate of return calculation is based on me holding the policy, paying premiums to age 85 and seeing the $150,000 death benefit going to my estate. (See Myerson’s analysis, page 40.)

The calculation is refined by the fact that I have benefited from 10 years of coverage for $150,000 of death benefit. Hence, my net cost for what was effectively 10 years of term coverage is $2,428 or $248 per year. “Without considering the time value of money, the annual cost of $248 for 10-year term insurance paying a $150,000 death benefit is quite a bit lower than would currently be available for a 57-year-old man,” Myerson says.

“In the current economic environment, an after-tax yield (subject to your life expectancy) of 6.9 percent is somewhat hard to obtain in the general market. However, given the fact that you appear not to need the insurance protection, combined with the risk of increased costs, I would be inclined, on balance, to surrender the policy and enjoy the proceeds (and saved premiums) during your lifetime,” Myerson concludes. I’ll count Myerson’s vote in the “surrender” column.

Based on the illustrations he pulled, Peter Blatt, founder of Blatt Financial Group in Palm Beach Gardens, Fla., suggested that my best course was to surrender the policy. “This policy is a wasting asset,” Blatt says. “It doesn’t make economic sense to continue supporting it.” He estimated that surrendering the policy would incur no tax liability (in fact, I would get a tax loss). If, on the other hand, surrendering the policy would create a taxable event, he would be inclined to roll the policy over to a variable annuity using a 1035 Exchange. Given that my term life insurance policy meets my insurance needs for the time being, Blatt agrees I should take the cash and find a better home for it. Another vote in the “surrender” column.

Surrender It Or Add to It

“Insurance shouldn’t be considered an investment; it’s a way to protect your wealth,” says John Girourd, president and CEO of CAPITAL Asset Management Group in Bethesda, Md. Girourd is of two minds about my insurance policy. “In an environment where a 4 percent guaranteed yield is hard to deliver, the insurance company has the right to charge more for the insurance.” That’s what’s happening with my policy. As it stands, Girourd thinks the increasing costs will eat away at cash value until there’s nothing left of my policy. In that case, he suggests surrendering it now for a better product.

But, in Girourd’s view, there is another way to think about my policy. The 4 percent guaranty of this policy can actually serve as a handy money market for savings. “You have the ability to throw almost $55,000 in cash into the policy,” he reminds me. “And that’s the best way whole life policies should be funded—to the maximum.”

In conclusion, here is how the experts weighed in:

John Girourd: Either surrender it, or keep it and max it out.

Just to complicate matters, there are actually four additional choices available to holders of policies like mine. (See “Four Other Options” below.) None of the experts I consulted recommended any of these. I appreciate all the experts who took the time to analyze my policy and educate me on the options. 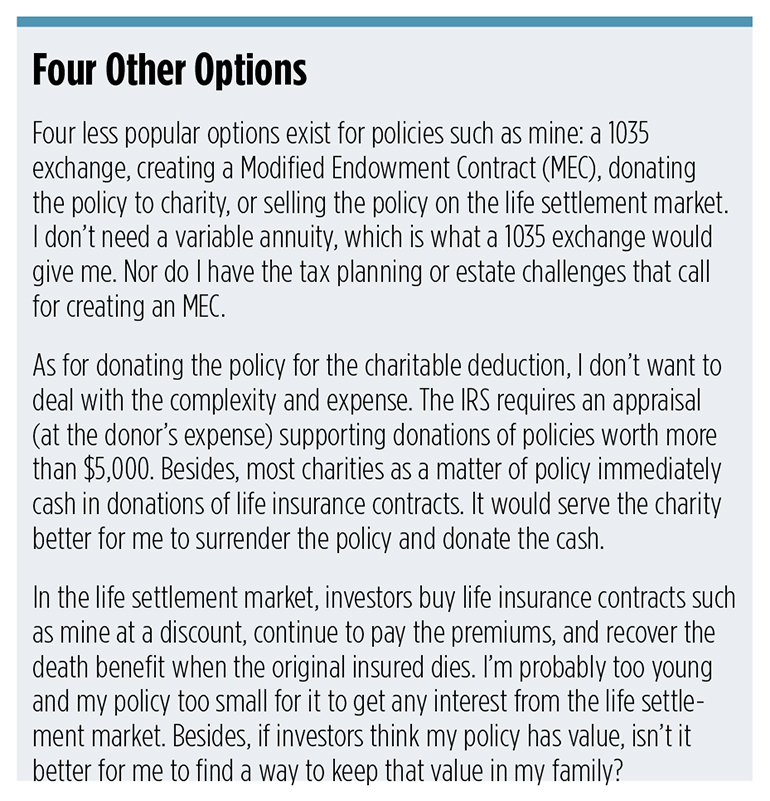