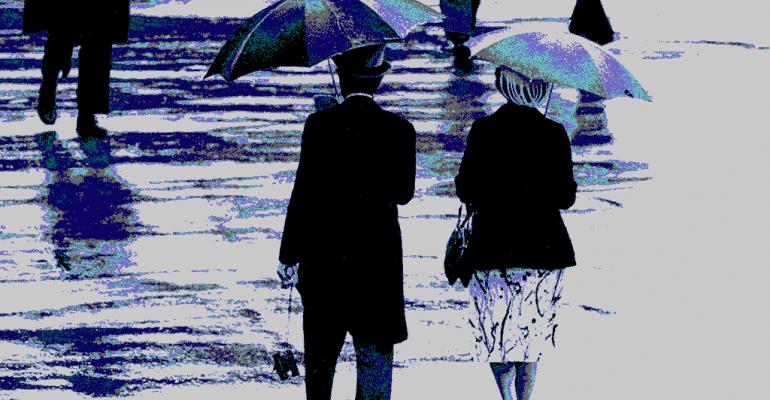 Insuring Two Lives is Cheaper Than One

“First-to-die” insurance can protect partners from cash flow issues when the first of the insured passes away.

First-to-die life insurance, also known as “joint life,” may be a lower-cost way for a couple—or even two small business owners—to simultaneously get permanent life insurance.

The policy pays off when the first of the insured duo dies. It’s typically used to cover the balance on a home mortgage or a business loan. It may cost less than individual coverage because underwriting two people is cheaper than one, particularly if they are in good health.

For instance, for a first-to-die universal life policy, a male and female, both age 45, in a preferred-plus risk class seeking $1 million of coverage, would pay $10,193 annually at Phoenix Companies. This includes a rider that would let the survivor purchase individual coverage after the first policyholder dies. By contrast, it would cost the same couple $12,103 annually for two individual universal life policies.

It’s not a typical option: “We don’t break out sales by this category (first-to-die),” says Catherine Theroux, spokesperson for LIMRA, the insurance industry trade association. “There aren’t many companies that sell the product.”

In fact, Phoenix Companies and State Farm are believed to be the only carriers that underwrite first-to-die coverage. Phoenix’s Joint Advantage Universal Life and State Farm’s Joint Universal Life Insurance products, which insure for two lives, feature flexible premiums and some cash accumulation. The coverage is designed to appeal to couples or small business partners who are concerned about cash flow or liquidity after the death of the first policyholder. Its primary use is protecting a business partner’s interest for buyout purposes.

"We heard from advisors that in today’s volatile markets, their clients want insurance products that offer an economical approach coupled with flexibility and an opportunity for steady cash accumulation,” says Phoenix Companies Vice President Tom Buckingham.

“Additionally, the policy builds account value from which loans and withdrawals are available,” he says. “It gives customers the flexibility of a permanent life insurance product with living benefit features at a more affordable price to households, business owners and others."

A number of companies will tack on a rider for an individual policy that would pay off when the first insured dies. However, depending on the insurer, this may not be cheaper than buying two individual policies. Plus, depending on the insurance contract, the survivor might be restricted from converting the rider’s proceeds to another permanent policy.

May Lou Jay, insurance agent with NetQuote in Denver, Colo., says that Farmers Insurance, Los Angeles, and New York Life are among insurers offering first-to-die life insurance riders. The Farmers rider can be converted into a standalone policy at any time.

“A first-to-die policy may be suitable for a couple with children who are under 18 or still in college,” Jay says. “If both spouses contribute to household costs, the death of one could seriously harm the family's ability to pay bills, let alone save for their children's educations.”

Other professionals are wary of first-to-die coverage. John Heeckt, president of Financial Sources in Bethlehem, PA., says first-to-die could be attractive for a couple with no children or other survivors. When the first partner dies, the benefits could help the survivor maintain his or her standard of living.

“We might recommend first-to-die in a circumstance where we have a prosperous, relatively young and healthy couple and we want to protect estate value at the lowest cost,” he says, “although, to be candid, we would probably load them up with separate term policies.”

The big drawback with joint life: A couple can get more term insurance individually at a lower cost. Or, if they shop around, they may find individual universal life polices for about the same price as first-to-die coverage. Plus there always is the risk of divorce or a business split between the joint life policyholders.

Lisa Weatherby, vice president at Wells Fargo Advisors in Mountainview, Calif., agrees that first-to-die can be used in “fairly specific circumstances” based on a financial planning analysis. In most cases, however, she recommends second-to-die life insurance coverage, which provides coverage after both policyholders die. Reason: First-to-die is not for affluent individuals who want to leave a legacy to their loved ones.

“We more frequently use second-to-die insurance with an irrevocable life insurance trust.”

For high-net-worth families, the second-to-die policy, she notes, can be used for wealth replacement or to pay estate taxes.