How Many Ways Can You Write the 'Same' Life Insurance Policy?

A policy can be highly customized, but make sure it’s built for the right party.

Recently, I was sent a life insurance proposal for evaluation that was mind boggling in its construction. Most of us understand that in financial transactions, we end up in a better place by reducing expenses and increasing crediting. This proposal did the opposite; it maximized expenses and minimized crediting. But it looked good, so the proposed policy owner was considering moving forward with it.

This particular transaction was a premium financed indexed universal life (IUL) policy. The death benefit was tens of millions of dollars with a cumulative mid-seven figure premium.  The prospect was sure it was a fairly conservative transaction because that’s what he was told, and he also believed he couldn’t lose because that’s how it was explained.  In reality, it was a very aggressive transaction with almost no reasonable hope of success and a likelihood of losing all of the premium, cash value, death benefit and collateral associated with it.  Unfortunately, I see many proposals, financed or otherwise, built similarly.

I’m not going to get into the details of IUL, as I’ve written extensively about it, and I want to focus on another aspect here.  Also, these points apply to traditional universal life and variable universal life as well.

It’s important to understand that there's no such thing as sitting down at a computer and hitting a button to determine how much life insurance costs for a particular individual. There’s an almost innumerable number of ways to build a life insurance policy, even within the same insurance company and for a specific product. A vast majority of these decisions are made without the policy owner having any understanding of the associated effects or even that there are decisions to be made. This means that someone else is making decisions that may meaningfully affect the performance of your life insurance policy and what you and your family get out of it someday or if it even exists.

Let's look at a very straightforward example. I'll assume a 40-year-old male with a preferred non-smoker risk classification. This individual is planning to commit $20,000 a year through age 65 to a life insurance policy.

I'm choosing a popular IUL product from a respected, well-known insurance carrier, and I'm going to build it in two distinctively different ways. The first way is instructing the software to calculate for the maximum level death benefit from today through age 100. I'm going to take the lead from the actual proposed policy my client was presented with and target minimal cash value at age 100, which means the policy won’t persist past that point as illustrated. The second policy will be on the exact same individual, use the same product from the same insurance company and incorporate all the same expense and crediting rate assumptions, but I'm having the software calculate for the minimum death benefit. 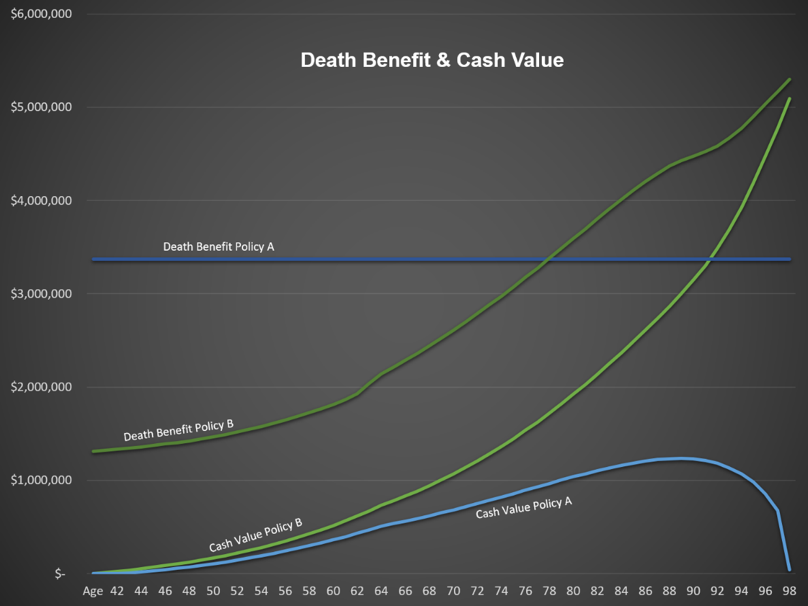 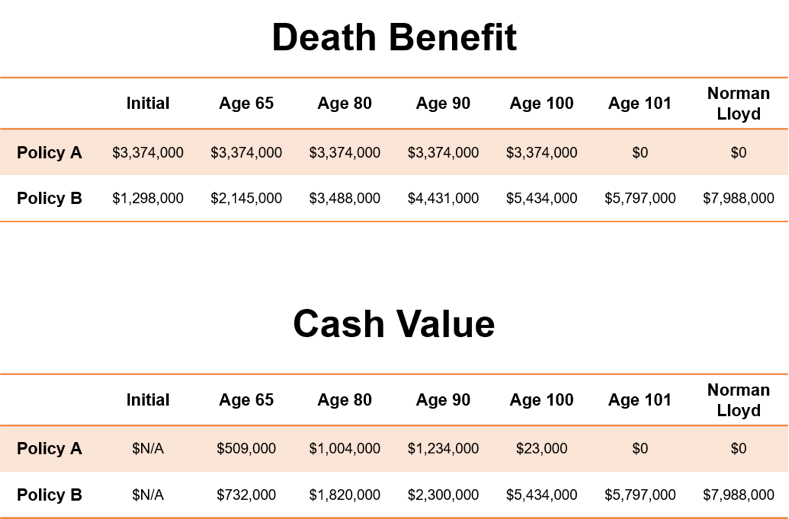 By the way, Norman Lloyd is an actor who passed away recently at age 106.  While a given individual may not plan on being around that long, as he probably didn’t, it’s interesting to see how it plays out.

Focusing on the death benefit and cash value, we can see that the contract with the greater initial death benefit, Policy A, has more expenses over time even though it’s ultimately surpassed by Policy B.  The spread isn’t huge at first but grows over the years.  It’s important to remember that the true death benefit aspect of the policy is the spread between cash value and death benefit, so make sure to focus on that.  Remember, this is the same policy with the same funding but built differently.  We see that Policy A has a greater death benefit through age 78 before Policy B overtakes it.  Then we see Policy A eventually take a nosedive and tank while Policy B shoots skyward. 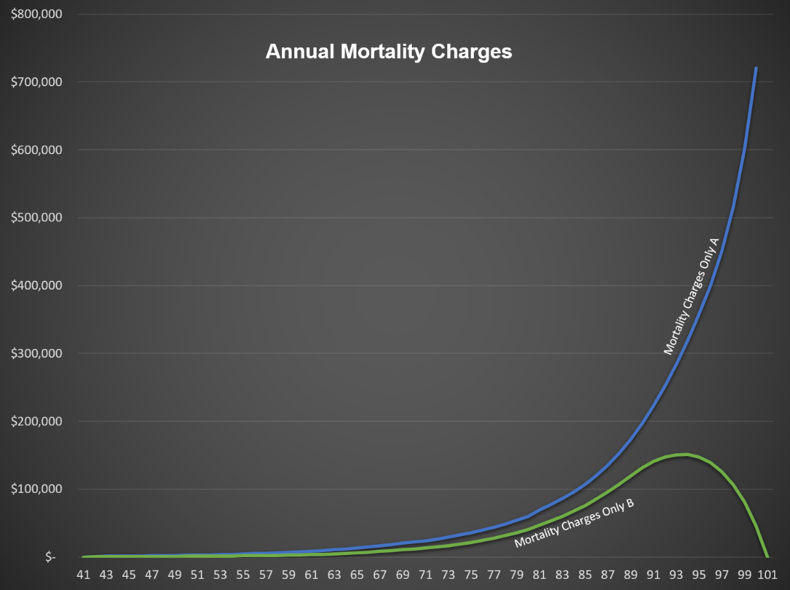 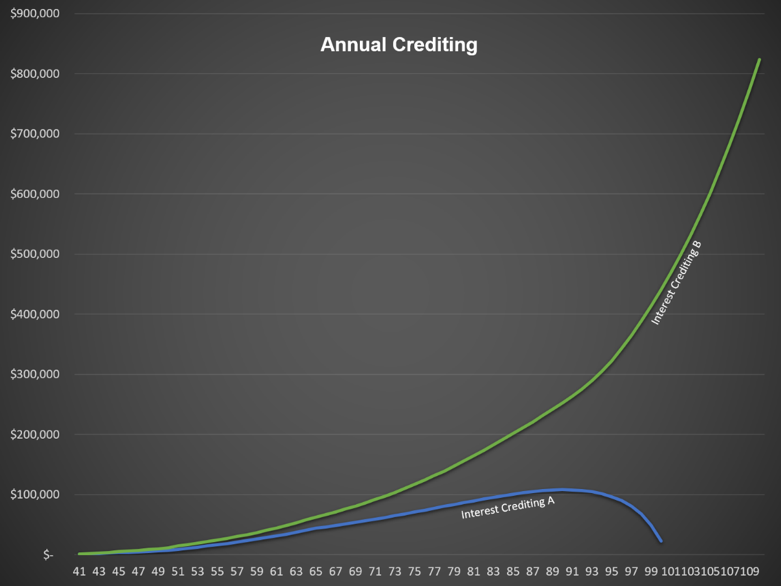 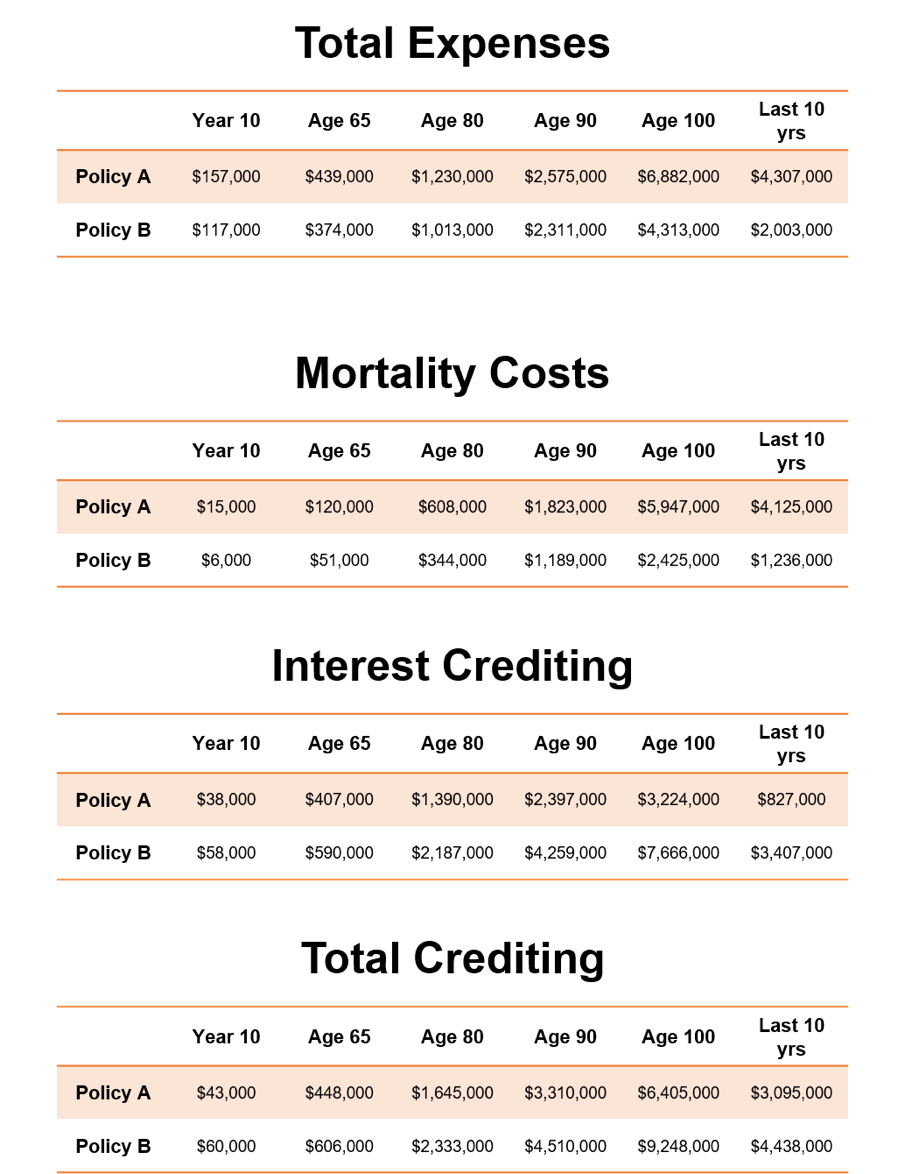 The faster we close that gap, the faster the net amount at risk between the cash value and death benefit shrinks, which becomes more and more meaningful the older the insured individual gets when the cost per dollar of coverage increases. The lower initial death benefit will obviously cost less, which leaves more of the premium to cash value, which grows the cash value faster resulting in a smaller spread, which further reduces expenses, which allows more of the premium to be added to cash value and continues the cycle.

We've created two beasts here; one feeds off itself and grows while the other feeds on itself and dies.  This is why we need to minimize expenses and maximize crediting.  It’s hard to think of something more powerful than these visuals showing the dramatic difference in expenses and crediting dependent on how the policy is built.

An interesting aspect of these numbers, which is surprising to many but is a simple result of compounding time value of money and a greater cost per dollar of insurance coverage as one ages, is that the biggest swings in crediting and expenses come in the later years. This is precisely why it’s so important to build a policy correctly to minimize expenses throughout the contract because even a small spread today means significant differences down the road.

While it's obvious that Policy A has a much larger death benefit out of the gate, most permanent life insurance policies are intended to be around for the long-haul. When do you expect to die? I'm not being facetious here; most of us expect to live a rather long life.  At least we're not expecting to die significantly prior to actuarial life expectancy. If that's the case, why build a policy to maximize death benefit in the early years rather than focus on the statistical likelihood of when death will occur?

Furthermore, my ongoing series, The Sensitivity of IUL, focuses on the effect of seemingly insignificant spreads in policy crediting and funding that make a monumental difference in the performance of a policy and the likelihood of success. Policy A has no buffer built in, and the tiniest of changes will cause it to go down in flames. Policy B, on the other hand, contains lower internal expenses at later dates in the policy that can help weather headwinds if they occur and may grow like a bad weed if they don’t.  Though both of these policies are driven by the S&P 500 Index, so the underlying crediting vehicle is the same, one’s built very conservatively and one’s built very aggressively.

The only way Policy A is going to end up doing better is if the insured individual dies prematurely. If short-term death benefit is of real importance, we can easily fill that spread with a cheap term policy and still come out ahead with a more conservatively built policy.  Two million dollars of 30-year term is only $2,500/year on this individual.  When I run the lean and mean version of the policy, the $17,500 left after paying for term still dramatically outperforms the fat and lazy version with more premium.  I keep referencing a conservatively built policy but, in real life, it’ll more than likely end up providing significantly more benefit. In the traditional investment world, conservative almost always lags far behind aggressive over time. In the life insurance world, with a properly built policy, it can be the opposite.

This begs the question as to why the proposal was built and shared as it was.  There's only two real possibilities; the agent doesn't know better or the agent is fully aware and did this intentionally because it looked more attractive, which will make the sale easier.  No reasonable individual who cares about the success of their client would ever bring to the table what this client was presented.

It's unfortunate, but I see it regularly. There are many very diligent insurance professionals out there doing things for the true benefit of their clients day in and day out but there are too many who are either ignorant of how to do things in the best interest of the client or know perfectly well and choose not to in order to benefit themselves.

It’s nice to know that life insurance can be custom built but let’s make sure it’s built for the right party.

Bill Boersma is a CLU, AEP and LIC. More information can be found at www.OC-LIC.com, or email at [email protected].