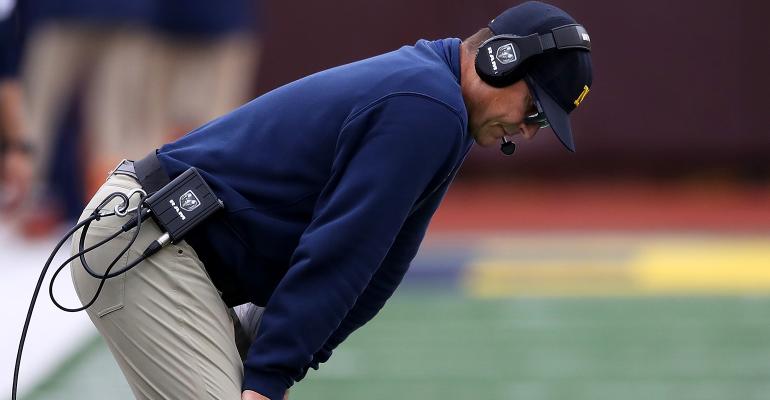 Hail to the Split-Dollar Victors

In August 2016, the University of Michigan began what has now become a trend when they offered a split-dollar life insurance arrangement to head football coach Jim Harbaugh as an alternative to deferred compensation. Other schools have since followed in Michigan’s footsteps: Clemson, for Dabo Swinney; LSU, for Ed Orgeron; and South Carolina, for women’s basketball coach Dawn Staley, to name a few.

The Benefits of Split-Dollar Life Insurance

For those unfamiliar with split-dollar life insurance arrangements: This is a program where an employer agrees to loan dollars to an employee (generally over a period of seven years) that are invested in a cash accumulation life insurance policy. Unlike a traditional life insurance policy, however, where the goal is to pay the lowest premium for the highest amount of death benefit, the policies used in these programs do the opposite and pay the highest premium for the lowest amount of death benefit. This approach minimizes policy charges and allows the policy’s cash value to grow as rapidly as possible with the least amount of drag. At some point—either out of policy cash value during the employee’s lifetime, or out of the death benefit at the employee’s death, depending upon the structure of the agreement—the loan from the employer will be repaid. But in the meantime, policy cash value in excess of the loan balance can be accessed by the employee income tax–free to supplement cash flow in retirement. Think of the arrangement as analogous to the employer funding a Roth IRA for the benefit of the employee, with a potential death benefit as an added bonus.

“Every Day We Get Better, Or We Get Worse”

“Those Who Stay Will Be Champions.” One somewhat surprising element of Michigan’s split-dollar agreement with Harbaugh was that it did not include any penalty for leaving early and taking another coaching job somewhere else. While Harbaugh needs to be employed by Michigan at the time of each scheduled advance in order to receive that premium advance, the obligation to repay the earlier premiums is not accelerated in the event of his early departure from the University. Moreover, Harbaugh’s loan is non-interest bearing and nonrecourse, so there is little incentive for him to remain with the school once all seven premiums have been advanced. This time around, Michigan should structure Howard’s agreement so that the loan accelerates and becomes immediately due if he voluntarily leaves to coach elsewhere within a certain number of years. As a practical matter, the impact of this approach would be similar to a buyout clause—simply raising the financial bar for deciding to leave.

In addition, Michigan should consider having the loan bear interest at the minimum rate set by the IRS, rather than making the loan interest-free. The arrangement could be paired with a separate retention bonus agreement that would pay Howard an additional bonus each year he remains with the school, in an amount sufficient to cover both the interest due on the loan and the tax on the bonus—so that the program would truly be cost-free to Howard for as long as he remains with the university.

Better Living Through Income Tax Efficiency. While Harbaugh’s split-dollar loan is “interest-free,” it is not “cost-free.” Each year, Harbaugh must pay tax on imputed income equal to the interest that Michigan would have charged him if the loan had borne interest at the minimum IRS rate. What’s worse: Harbaugh won’t know the full extent of his annual imputed income until all seven advances have been made on the loan—because the imputed interest rate that is applied to each advance is determined by the rate in effect at the time the advance is made.

Had Michigan loaned Harbaugh all $14 million up front in August 2016 (rather than advancing $2 million each year for seven years), it could have locked in a 1.9% interest rate on the entire amount for the rest of Harbaugh’s life. (Had it gone this route, to be consistent with the other terms of the existing deal, Michigan could have clawed back a pro rata portion of the $14 million in the event that Harbaugh left before Year Seven.)

Instead, the rates in effect for installments two through five were 2.26%, 2.64%, 3.31%, and 2.08%, respectively—which amounts to almost $54,000 of additional imputed income that Harbaugh will now have to pay tax on each year (for the rest of his life) over and above the amount he would have recognized had the entire $14 million been advanced up front.

With interest rates even lower today than they were in August 2016, if Michigan enters into a split-dollar agreement with Coach Howard, based on April 2020’s rate, and advances the amount of all seven premiums up front, they can lock in an interest rate of only 1.44% for the rest of Howard’s life.

While some might be inclined to view certain of the provisions described above through the lens of whether they benefit the university (the acceleration clause; charging minimum interest rather than making the loan interest-free) or the coach (advancing all of the money up front), such a focus is too narrow and loses sight of the motivation for entering into a split-dollar agreement in the first place. At its core, the purpose for a split-dollar insurance program is to promote the long-term retention of a key employee in a tax-efficient manner that provides more benefit to the employee than the relative cost to the employer. It’s not a zero-sum game—in fact, it’s quite the opposite: The program works best when the employee is able to receive the maximum benefit possible from the dollars that are provided, in exchange for expressing a long-term commitment to be part of the employer’s team. The university and the coach are in this together, and for the split-dollar arrangement to achieve its intended purpose, they each need to get what they’re looking for out of it.

To paraphrase the end of another famous Bo Schembechler quote: If the University and Coach Howard work together as a “team,” then when the whole season is over … it’s gonna be Michigan again. Michigan.