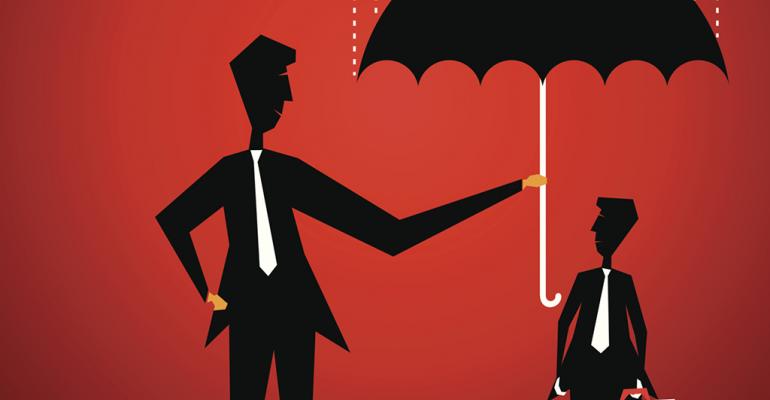 Don’t Be a Jumbo Dumbo

Coordination is key to avoid violating these insurance policy limits.

Insurance companies often impose jumbo limits on the policies they issue (that is, a limit placed on the amount of coverage that may be in force and applied for on an individual life for automatic reinsurance purposes). You and most of your clients don’t have to regularly deal with this term. But it’s still important to understand this concept and explain it to your clients. Failing to do so can have unexpected results.

The concept of jumbo limits and the potential repercussions of ignoring them are very important and can be confusing to people, even agents, who are treading in unfamiliar territory. A common jumbo limit is $65 million of life insurance, though it can be higher or lower, and it’s often adjusted by age. This is the limit over which someone who doesn’t know what they’re doing can really screw things up. An important issue to remember is that one calculates the limit by taking the currently in-force insurance and adding to it the total amount of insurance applied for with all insurance companies. Remember, even if there’s no desire to put all of the insurance applied for in place, the total amount of in-force and applied-for coverage is included in the jumbo limit calculation.

Consider this situation: Assume a client has “only” $20 million in force and is working with an agent or a number of agents to replace that $20 million. The client has decided competition is good (which it usually is) and has called in multiple agents: an agent with a career shop or captive agency, an independent agent, their financial advisor and maybe even their property and casualty agent. Remember, whether any of the agents are aware the others exist, they’re almost certainly not coordinating their efforts with one another and are more apt to be secretive or even combative in their individual efforts to win.

Since there’s a desire to have only the $20 million in force ultimately, many people think the jumbo limits are a non-issue. This isn’t the case. The career agent might go only to their main company, but the others might want to submit applications to two, three or more carriers. Very quickly, your client could have over $100 million “in force and applied for” if there’s no coordination.

Your client might think they're being clever by pitting the agents against one another, but there’s more to it than that, and there absolutely needs to be some coordination with someone in charge, or this can quickly turn into a nightmare. Not only should one person be coordinating the process, but also, one insurance carrier should likely be the lead working on behalf of competing insurance carriers, as counterintuitive as it may seem. Diversification can still be achieved; your client can still choose which offers to accept and more than one agent may be involved, but there has to be a team captain, and the captain shouldn’t be one of the agents for obvious reasons.

By fighting each other and not coordinating their efforts, the agents will create a few problems. First of all, given the nature of the insurance brokerage market and the agents’ tendency to commoditize the process by spreadsheeting carriers and gravitating to the lowest premiums, some of these agents will be submitting applications to the same insurance carriers, so there may not be as much diversification as initially assumed. Second, on the applications, the agents are unlikely to incorporate the other agents’ efforts, known or unknown, when completing the section on in-force and applied-for insurance coverage.

Assuming the $20 million application exceeds the retention limits with the respective carriers, the insurance companies are going to send the files to reinsurers, which will cause a logjam when the reinsurer starts getting the case from multiple directions at once. I’m not going to delve into how this gums up the process and how to to fix it. I’ll simply leave it at the fact that you don’t want to go there, and it may be difficult to extricate yourself from that morass.

In the end, what seems reasonable from a client’s perspective can shoot them in the foot. You can’t bring in multiple agents on a double-blind basis, and you can’t allow the agents to submit formal applications with large face amounts. There are ways to informally underwrite a case that won’t screw up the reinsurance market, or formal applications can be submitted at death benefit levels that won’t cause problems. Someone needs to understand the playbook and coordinate the players.

Here’s one recent story. I was called into a case by an estate-planning attorney for clients who had an $80 million existing portfolio. The details aren’t important, but the entire portfolio was underperforming and in jeopardy. The existing agent took an application for more than $50 million with a single carrier for a single product he was planning on using. There were a number of red flags and a bit of cynicism on the advisor’s part, which was why I was called in.

The short story is that there was a better way to create a portfolio in the clients’ interest but because of some underwriting issues, actions of the agent and details particular to this situation, coordinating with reinsurance was off the table for me. Instead, I cobbled together a portfolio with multiple carriers limiting exposure with any given one to their respective retention limits.

In the end, I made it work, but it was substantially more difficult than it needed to be and ran up significant advisor fees that were otherwise unnecessary. This case also offered a good lesson in another way. Because of the underwriting challenge with one of the insured individuals, there was no way I wanted the case in the hands of the reinsurers anyway. Once they had an offer on the table, some of the individual carriers would have had to go with it. Rather, I could negotiate with the individual companies with whom I had close relationships and manage favorable offers out of enough of them to build my portfolio in the best interest of the clients. If the reinsurers were running the show, my relationships with the individual insurance companies would have been next to meaningless.

Please remember: When dealing with large face amounts for your high net worth clients, don’t assume the clients’ agent understands the rules of the playing field. An independent quarterback who understands the playbook and can manage and lead each of the respective players is indispensable.