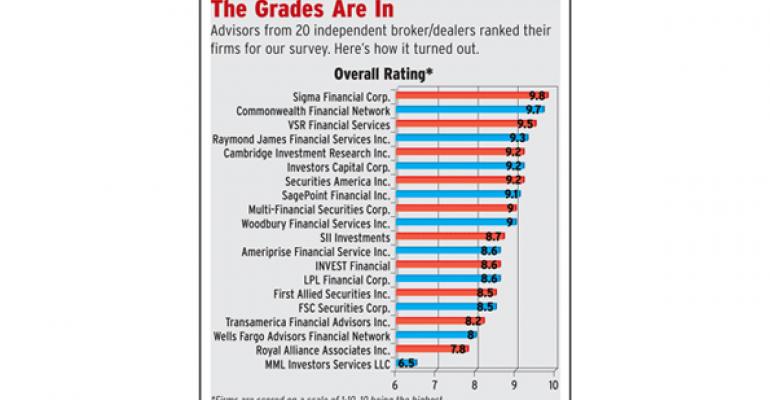 In our second IBD Report Card, we examine the grades advisors gave their firms, and offer a look at one major trend that will shape the indie landscape in the next few years: consolidation.

Despite a tough market environment and a squeeze on profit margins, plenty of IBDs large and small are doing an excellent job of keeping their financial advisors happy, Registered Rep.'s 2012 Independent Broker/Dealer Report Card shows. Just look at the grades the firms at the top took home. (See page 42, “The Grades are In.”) But analysts and executives predict the landscape is going to change dramatically in the next three years as the buying and selling of firms accelerates. 2011 was a busy year for deal-making and offered a taste of what is to come. A number of major independent broker/dealers got hitched, which meant a lot of upheaval for financial advisors. FAs need to examine their career aspirations and prepare for a potentially turbulent future, analysts say.

First, a look at the coming shakeout. Dealmaking has been ongoing in the brokerage industry, but it really got rolling last year. To name a few of the major transactions, Ameriprise Financial sold off Securities America to Ladenburg Thalmann; Wells Fargo made a deal to sell H.D. Vest Financial Services to Parthenon Capital Partners, a private equity firm; Lovell Minnick Partners acquired First Allied from Advanced Equities; Pacific West Securities closed down and moved its reps over to Multi-Financial; and Allied Beacon Partners made a recruiting deal to absorb Workman Securities' reps. So far, 2012 has started off with a bang, with Cetera Financial's acquisition of Genworth's broker/dealer, LPL Financial's purchase of Fortigent, and Raymond James buying Morgan Keegan, a regional firm.

In fact, if you look at the list of 20 firms that responded to Registered Rep.'s survey, 40 percent of these firms or their parent companies were bought, acquired another firm, or experienced a change of ownership last year. Industry analysts, M&A consultants and broker/dealer executives say M&A activity in the IBD space will pick up even more this year and continue for the next three to five years, at which point the number of acquisition targets will have dwindled. In the end, the larger players will get larger, the mid-sized firms will thin out, and a handful of smaller firms will continue to grow organically, they predict, leaving the industry in a barbell shape.

David Alsup, director of business development for The Compliance Department Inc., foresees the b/d universe shrinking from 4,555 firms today to 4,000 by 2015, with the majority of the buying and selling happening among IBDs. Some of that will come from firms exiting the business altogether — at a net rate of about 16 per month — though Alsup says this rate will slow toward the end of the five-year period. Already, the number of firms in the business has declined to 88 percent of 2005 levels while the number of reps in the business has only dropped by 3.11 percent. He says this is just further proof that the large firms are swallowing some of these disappearing firms, while some of the orphan advisors may be heading to the smaller firms.

Srini Venkateswaran, partner in Booz & Company's wealth and asset management practice, also says the consolidation trend will continue for the next three to five years, with, on average, a transaction every working day for the next year, including divestitures, acquisitions, demise of a firm, or some form of ownership change. And Chip Roame, managing partner with Tiburon Strategic Advisors, agrees that consolidation will accelerate in 2012 and continue for the next three to five years. He predicts we'll see over 50 deals of all sizes in the IBD space in 2012, and he expects 10 of the top 30 firms to sell.

Firms that are known to be on the acquisition trail include LPL Financial, Raymond James, AIG Advisor Group, Ladenburg Thalmann, and some insurance firms, such as Metlife. Analysts also say there are several private equity firms looking to put capital to work in the IBD space, including Lovell Minnick, Parthenon and Lightyear Capital, which owns Cetera.

“The only barrier to more deals is the absence of targets,” says Philip Palaveev, president of Fusion Advisor Network.

Firms with a lot of fee business are in demand, says Aite Group's Alois Pirker. Another potential source of acquisition targets could be insurance-owned independent broker/dealers, says Palaveev. Many of the insurance companies that bought the b/ds six to 10 years ago now want to wash their hands of them because it's more difficult to distribute proprietary product and the profit margins just haven't lived up to what they expected going into the deals, says Roame. Some divestitures have already happened. Pacific Life sold its b/ds to LPL; ING sold its b/ds to Lightyear; and most recently, Genworth sold off its b/d.

Scott Smith, senior analyst with Cerulli Associates, says the consolidation will be more like a slow trickle than a sea change. “I think it'll start building because you're not going to see 50 of these entrepreneurs who own IBDs do it overnight.”

So why are independent b/ds jumping into bed together? First of all, IBD margins are incredibly slim and getting slimmer, squeezed as they are by shrinking revenues and rising costs. Jim Nagengast, CEO of Securities America, says revenues are struggling under the weight of competitive pricing and low interest rates. Low interest rates put pressure on cash spreads, a large part of IBD industry revenues, he adds. Low rates also make CDs, money market funds and short-term Treasuries unattractive for retail investors, other sources of revenue for many IBDs, says Darlene DeRemer, partner in New York investment bank Grail Partners. Anemic mutual fund trading volumes and slow proprietary trading are also to blame for revenue weakness, she says.

And then there's cost. According to Palaveev, IBD expenses typically take about a 10 to 15 percent bite out of revenues. With competitive payouts to brokers at about 90 percent or more of revenues, there's a pretty narrow wedge for profit. On top of that, you have rising technology and compliance expenses.

“It's extremely challenging to be a small broker-dealer today,” says Larry Roth, president and CEO of Advisor Group. “To succeed for the long-term, you must be financially strong and well-capitalized. You have to be able to make large investments in technology, compliance, and other services, all while offering a flexible platform to advisors.”

The demand for high-end technology is also driving consolidation, says Venkateswaran. “You have to think that the bigger firms have deeper pockets and can take on bigger capital expenditures in technology, and that's a big deal these days,” Venkateswaran says.

Venkateswaran says deals are being done at a fairly good price for buyers because of all of the challenges facing small firms. If you have some kind of distinct asset or capability, such as Genworth with its tax and accounting professionals, you can command a premium, he says. DeRemer says the valuation really depends on a firm's product mix and the buyer's ability to retain reps.

In this new world order, advisors are going to have to rethink their career strategies, say analysts.

Larger firms may have greater resources and better technology, but an advisor is more likely to get lost in the crowd. At a smaller firm, there's a better chance of being heard but greater risk that the firm could run aground or get picked up by an acquirer. Either way, reps will have to think about what resources they really need to run their practice successfully and choose accordingly.

Reps may also want to be careful about relying too heavily on their b/ds since ownership could change, and often. This is where reps will have to use their management skills and be careful of what they keep in-house and what they outsource to the b/d. “I think advisors sometimes have a tendency to think of broker/dealers almost like these mountains in the landscape; they're always going to be there,” Palaveev says. “They're not mountains. They erode; they build up; they change.”

Registered Rep.'s survey saw high satisfaction rates at both ends of the spectrum — small and large. The top-ranked firm, for example, was Sigma Financial, which had 650 FAs as of June 2011; VSR Financial Services, number three on the list, has 278 reps. But some larger firms took top spots as well, including Commonwealth Financial Network, Raymond James Financial Services, and Cambridge Investment Research. The 300-pound gorilla, LPL Financial, which boasts 12,799 reps, however, ranked 14 on the list with an overall score of 8.6.

The second annual survey was fielded in December 2011 and early January 2012, and yielded 4,271 responses. This time around, we partnered with Cerulli Associates to conduct the research. In our coverage of the survey, we only used data from firms that had 50 or more advisor respondents. The b/ds we chose to profile are among the top performing firms, and we feel they have a good story to tell. We chose not to profile Sigma, Commonwealth, and Cambridge, which ranked first, second and fourth, because we already profiled them in the first annual survey last year.

Sigma scored particularly high on sales and service support, receiving a 10 out of 10 for its helpful home-office support staff. Reps also like Sigma's timely payout of commissions and fees and the ability to choose a mix of commission and fee business, which both received 10s. Commonwealth scored highest on its management, with a 9.8 rating, followed by sales and service support at 9.7.

Overall across all firms, advisors seemed least satisfied in the technology department, which took the lowest average category rating of 8.3. Cerulli's Smith says the top complaint he hears from reps is that technology is not integrated enough. A larger firm, he says, will likely have more integrated systems, so advisors are rekeying data less often. In our survey, 47.1 percent of respondents said technology was the most important factor in causing them to look for a new b/d.

IBD advisors are not entirely thrilled with pay, however. Compensation and benefits received an overall rating of 8.5, with the sub-category health and retirement benefits getting a low score of 6.5. Reps are more content with their firms' product offerings and management, which each took a score of 9.