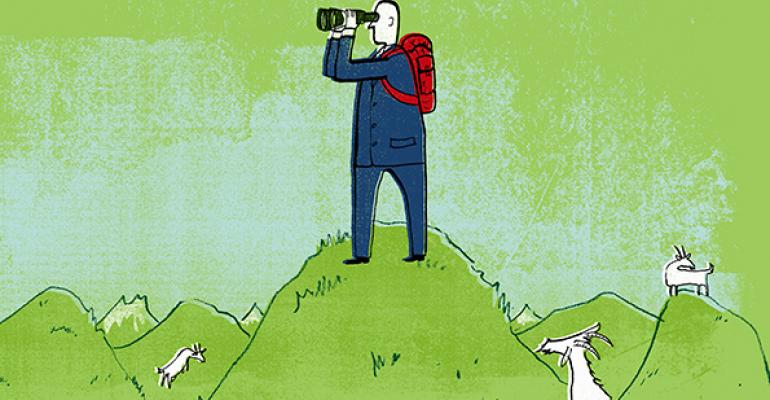 Browse stories related to RIAs and the life of an independent broker. Advisors Disullisioned with Alternatives If I Knew Then What I Know Now ... The Rise of the Mini-Aggregator Top 100 RIAs 2014 Q&amp;A: Arnerich Massena Q&amp;A: Plante Moran Q&amp;A: Creative Planning To Ensemble or Not to Ensemble

A Plan Is in Place, But It’s Not a Priority

More advisors are writing out their succession plans; 44 percent of RIAs indicated they have a documented plan, up from 31 percent last year, according to WealthManagement.com’s 2014 AdvisorBenchmarking RIA Trend Report, a survey of about 400 RIAs. That indicates a growing awareness on the merits of succession plans, yet only 1 percent of advisors say selling their business is a top priority, down from 2 percent last year. In addition, only 1 percent say purchasing another financial advisory practice is a top goal, the same as last year. Two percent of RIAs indicated buying a practice was a secondary goal, while 6 percent put it as a tertiary goal. The results indicate that the industry won’t likely experience a high rate of consolidation in the near future, as advisors focus on growing their businesses organically and increasing profits.

After years of relying on seminars and direct mail campaigns, RIAs are shifting their marketing efforts toward the digital channels. The RIA Trend Report found 23 percent of advisors are using blogs, up from 14 percent last year; optimizing online search, up to 22 percent from 19 percent, and webinars; up to 20 percent from 18 percent. Social media was the second most popular marketing tool used, increasing from 36 percent in 2013 to 42 percent this year. At the same time, non-digital approaches, such as print newsletters and direct mail, showed declines. 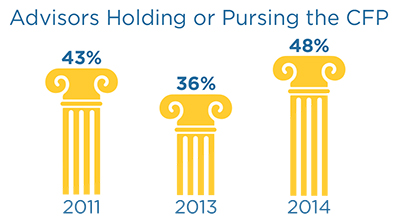 While the CFP Board has been mired by bad news headlines this year, the designation is gaining favor among RIA firms, a possible sign that the organization’s advertising campaign is working. Forty-eight percent of advisors are currently holding or pursuing the CFP, up from 36 percent last year, a reversal of longer term trends, according to the RIA Trend Report. More advisors are also pursuing the CFA designation, with 14 percent of RIAs, up from 11 percent in 2013.

Has Advisors’ Use Of Multiple Custodians Reached a Saturation Point? 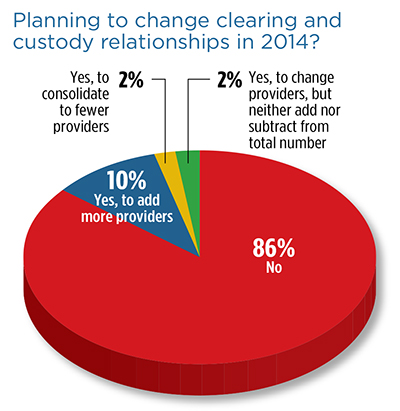 Advisors are increasingly working with multiple custodians, with 55 percent of RIAs reporting that they use more than one custodian, according to WealthManagement.com’s 2014 AdvisorBenchmarking RIA Trend Report, a survey of about 400 RIAs. And it’s a growing number—48 percent kept assets at multiple custodians in 2013. The percentage of RIAs who worked with only one partner continues to decline, down to 42 percent from 47 percent in 2013. The top reason for spreading the wealth, cited by five in 10 RIAs, was to “meet different needs,” although client preference for specific custodians was also driving the decision with 47 percent of advisors. Twenty-six percent said they’re doing it for investment option availability, up from 21 percent last year.

While the number of multiple relationships is expanding now, the trend may slow down going forward, with 86 percent of respondents saying they don’t plan on changing their custodial relationships in the foreseeable future. Meanwhile, only one in 10 advisors expects to add providers. 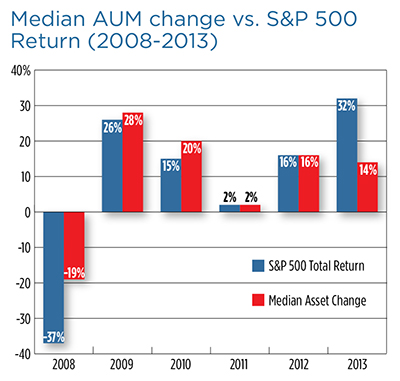 For the past few years, advisors have reported assets under management changes that have largely been consistent with the change in the S&P 500 Index. But this year, RIAs posted a median AUM increase of 14 percent, lagging the S&P return of 32 percent by a very large margin. This is consistent with the fact that not all advisor revenue is tied to managing clients’ equity market exposure; indeed, asset allocation decisions and the wide variety of services provided can have a meaningful impact on the variability of an advisory practice’s revenue stream. 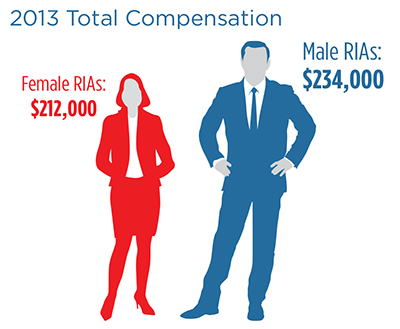 A pay gap still exists for female advisors at RIA firms, but it’s a significantly smaller gap than the national average, where among full-time, year-round workers, women were paid 78 percent of what men were paid in 2013. Among RIAs, male advisors earned an average of $234,000 in total compensation in 2013, while women earned an average of $212,000.

But while women earned about 10 percent less, they are growing their yearly earnings at a slightly faster pace than their male counterparts. According to the study, female advisors saw a 13 percent increase in their total take-home pay since 2013, while men only grew by 11 percent.