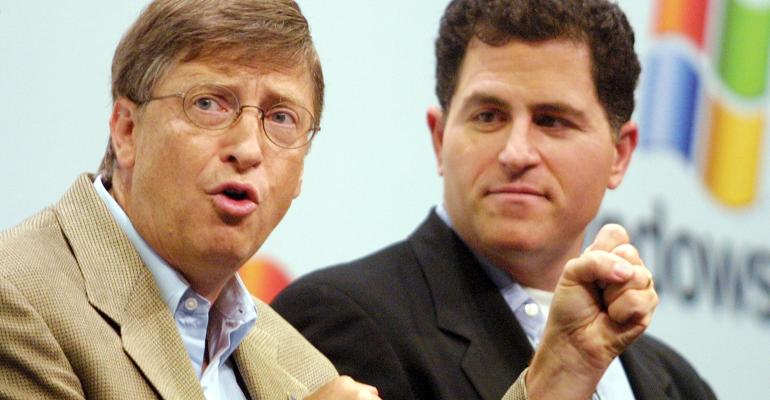 (Bloomberg) -- In December, a half-dozen of some of the richest families in the U.S., from agriculture to beverages, gathered in a conference room on the 10th floor of an office building in Miami.

This was not some cabal to rule the world. Instead, for an hour over coffee and bagels they listened to a dealmaker for billionaire brothers J. B. and Tony Pritzker talk about how to buy companies.

Wealthy families are embracing their inner Warren Buffett, albeit on a smaller scale. They used to hand most of their assets to managers to invest. Now, following the likes of Buffett, Michael Dell and Bill Gates, many are acting like private equity firms, buying large stakes in companies or acquiring them outright. Families can exert tighter control over their money, give the kids something to do and cut their deal fees.

But the trend has meant that private equity shops have been forced to scramble to make sure they don’t lose a critical source of money for their buyout funds. Blackstone Group LP assigned an executive to court wealthy families, and Carlyle Group LP and other private equity firms are allowing many to invest alongside them in deals.

“After a decade of direct investing we found that we actually saved millions, which were reinvested in companies and assets -- huge, huge savings,” said Chad Hagan, whose family built its wealth in private health-care and financial businesses.

In the past two years, deals have been struck by families tied to Bain Capital and the Pritzkers. In March, the Bechtel family of construction fame bought a controlling stake in a car dealership group in the Minneapolis area. It typically takes stakes of between $30 million and $100 million in businesses run by families.

Almost 70 percent of family offices engage in direct investing, according to an April survey of 80 offices by the Family Office Exchange. And in 2015 they outperformed buyout firms. Direct deals returned them 15 percent on average, the survey showed -- more than double private equity results that year.

By directly buying or taking a stake in a company, families can avoid paying fees to buyout firms, which typically charge a 2 percent annual management fee while keeping 20 percent of profits.

To be sure, the rich aren’t abandoning private equity shops as a place to put money. They pour an average of 27 percent of their assets into these funds, according to research firm Preqin. And family money represents 9 percent of private equity funds, more than double from five years ago. Carlyle co-founder David Rubenstein last week said family offices, along with sovereign wealth funds, are the firm’s fastest-growing sources of new money.

Still, an estimated $4 trillion in family capital globally is up for grabs, underscoring why top private equity firms are jockeying for a slice. Blackstone’s Studzinski helps families find transactions and deal flow, which sometimes goes in both directions.

For example, the family owners of Gianni Versace SpA wanted to partner with Blackstone when they sold 20 percent of the Italian fashion house to the firm for 210 million euros ($240 million) in 2014.

Carlyle, which manages about $12 billion in family office money, has sometimes partnered with those clients to do deals, a growing trend among buyout managers as they seek other sources of capital for large transactions. That happened with Carlyle’s $7.4 billion acquisition of Symantec Corp.’s Veritas data-storage business, completed in January.

“The families often have a rich history of being involved in companies -- not somebody who’s been an investor in a particular sector, but somebody who’s lived it," said Mike Arpey, the top fundraiser at Washington-based Carlyle.

Some families have been buying companies on their own for decades. MSD Capital, which oversees the fortune of Dell Inc. founder Michael Dell, was formed in 1998 and has over $12 billion under management. Cascade Investment is the secretive holding company dedicated to Microsoft Corp. co-founder Bill Gates’s investments. Pritzker Group, run by J.B. and Tony, has more than 30 dealmakers in Chicago and Los Angeles.

About 250 such family offices in the U.S. are currently on the prowl to make controlling investments in privately held businesses, said Ward McNally, an adviser to family offices through his McNally Capital and whose family founded mapmaker Rand McNally. Targets generally earn $3 million to $50 million annually before interest, taxes, depreciation and amortization.

The challenges and risks are many, according to experts. Chief among them is luring managers from high-paying private equity funds to run their operations. And of course an acquisition can turn south, denting the family fortune.

But in certain ventures, families can receive dividends to generate income for relatives over generations, McNally said. There are also ways to structure deals that can lower a family’s estate-tax exposure.

Unlike private equity firms, families don’t feel the pressure from investors to sell within 10 years to cash out, said Hagan, managing partner at his family’s investment firm Hagan Capital.

“Fund managers may force exits at times,” he said. “We can hold for decades.”

Non-financial considerations play a role, too, said David McCombie, whose investment firm arranged the meeting in Miami. Some want to give children or grandchildren a starter role in running a business. Others use direct investments to echo their interests or values.

Blue Haven Initiative, the family office of Liesel Pritzker Simmons, an heiress to the Hyatt hotel fortune, and her husband Ian Simmons, has used its portfolio to fund businesses in renewable energy and financial services firms in sub-Saharan Africa, such as Ethical Electric and M-KOPA Solar. These investments “address specific social and environmental challenges,” said Lauren Cochran, Blue Haven’s director of private investments.

Kensington Capital Holdings focuses its direct investments in technology, health care and consumer. Principals Daniel and Jon Gay are sons of Robert Gay, a managing director at Bain Capital for 15 years before founding his own investment firm.