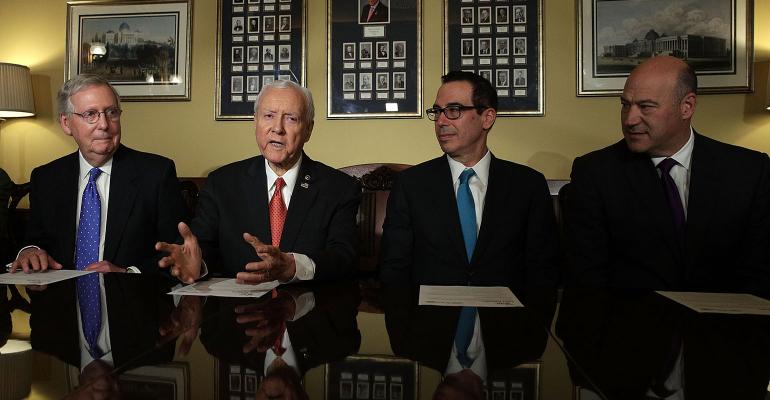 Why the Senate’s Tax Reform Bill May Be Most Relevant

Given the tight timeline for passing tax reform, Senate Republicans may have to jam their bill through the House, with controversial items in place.

The conventional theory is that tax reform is the last, best hope for Republicans to avoid a bloodletting next November. With election primaries beginning in March of 2018 and with very few accomplishments to crow about, incumbent members of Congress in those early primary states need a popular tax cut plan sooner than later.

Whatever the final bill, it will be far easier to get those affirmative votes in the House than in the Senate. Leader Mitch McConnell can only spare two votes and, in addition to some of his recalcitrant members—you know who they are—McConnell has other emerging issues to contend with. Senate leadership is talking about finishing a tax bill before mid-December, when the next Alabama Senator will be sworn in. The thinking is if it’s a Democrat, he likely won’t vote for the bill; if it’s Republican Roy Moore, he may drag his feet and deny Leader McConnell a win, as McConnell is insisting Moore bow out of the race.

Then there’s Senator Bob Menendez. His trial is before a jury right now. If he’s convicted, he’ll be pressured to withdraw and Republican Governor Chris Christie will appoint his replacement, which could help Leader McConnell secure a win. But for right now, Menendez is voting, and he’s a no on tax reform.

But maybe we’re ahead of ourselves. The House hasn’t passed its bill yet, yet it could happen as early as Nov. 17. And the Senate is still working on its version of the bill in committee. Typically, after the House and Senate both pass their versions, a small committee of House and Senate members convenes, known as a Conference, and hammer out the differences to arrive at one bill that both chambers can pass. This stuff wasn’t covered in Schoolhouse Rock’s, “I’m Just A Bill.”

But there’s probably no time for that this year. Many expect that if the Senate has to fight and scrape to pass its bill with around 50 votes (the Vice President breaks any tie), they may just send it to the House and tell the House to pass it or else, because there’s no wiggle room for any changes. That’s called “jamming the House,” and there’s plenty of precedence.

While not ideal, particularly if you’re Speaker Paul Ryan or Chairman Kevin Brady, with all the politics in the Senate, McConnell may end up with little choice. If this is the case, then what is—and isn’t—in the Senate bill becomes critically important.

One big item is the State and Local Tax Deduction. There are plenty of House Republicans from blue states that put up a fuss about keeping a measure of SALT in the House tax reform bill. But the politics are different in the Senate. The Senate repealed SALT because it primarily benefits blue states, and there aren’t any Republican Senators from high-tax, blue states facing voters in 2018.

Rather, this time tax reform is focused on two big objectives: (1) driving down the corporate rate to entice companies to locate here and not move abroad, and (2) lower the tax burden on middle class families (that is, those making under $90,000/year). The latter is accomplished by lowering rates and doubling the standard deduction, which has the additional benefit of drastic simplification for nine out of 10 taxpayers who just may be able to file on a postcard.

This may sound like something from the Democrats tax reform playbook, which could explain why they’ve been off their game a bit lately. When the Republicans first unveiled their tax reform plan in Congress, the Washington Post noted, “[i]n their haste to condemn the GOP tax plan, Democrats have spread far and wide the false claim that families making less than $86,100 on average will face a hefty tax hike. Actually, it’s the opposite. Most families in that income range would get a tax cut.”  And the Washington Post promptly gave Democratic leadership four Pinnochios for their messaging. By the way, four Pinnochios is reserved for “whoppers.”

So for now, the Democrats in Congress aren’t swaying many voters with their opposition to the Republican tax reform plan. Many wonder if they’ll continue to oppose as it becomes clearer that the Republicans may have the votes for the bill or whether some—like those 10 Democrats in red states who’ll face the voters in 2018—will play ball.

The next several weeks will be a rollercoaster ride. Stay tuned.