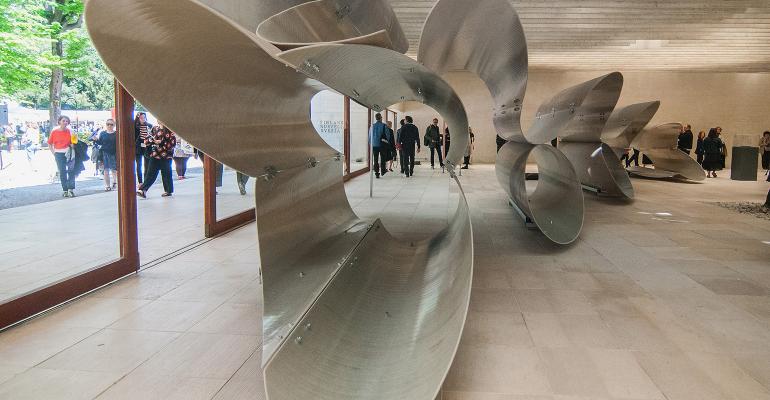 The Venice Biennale has emerged as the place where curators, collectors, advisers, and artists come to a consensus on what art is important.

(Bloomberg) --Halfway through her second eight-hour day of looking at art in the Venice Biennale, Maria Giulia Maramotti took a break outside the Punta Della Dogana, an exhibition space on the Grand Canal.

“It’s been interesting to understand what the art world thinks is relevant,” said Maramotti, the senior director of North American retail for Max Mara Ltd, which was founded by her grandfather. “I’ll go home knowing about some artists who I wouldn’t have necessarily thought about collecting, but who now I think could be interesting as a part of the Collezione Maramotti,” the family art collection based in Reggio Emilia, Italy.

Over the course of one week in May, hundreds of the world’s wealthiest people converge on Venice for a bacchanal of openings, parties, and receptions that revolve around the commencement of the 57th International Art Exhibition, an ostensibly not-for-profit art show that’s known colloquially as the Venice Biennale.

The Biennale comprises 85 national pavilions, 29 of which are in a leafy park called the Giardini, where countries that include the U.S. and Russia host contemporary art exhibits. The rest of the official show is in the Arsenale, a massive warehouse complex in which one curator (this iteration was organized by Christine Mace, the chief curator of the Pompidou Centre in Paris) assembles hundreds of artworks around a theme. This year’s is Viva Arte Viva, a show “inspired by humanism.” The Biennale will run from May 13 through Nov. 26.

Satellite exhibitions will also be sponsored by philanthropies and museums, and in the case of the Punta Della Dogana, by billionaire François Pinault. (As Maramotti spoke outside, Pinault exited the building, which is currently hosting an exhibition of controversial and potentially vastly lucrative set of new works by artist Damien Hirst.)

Forming a Consensus Because of the large number of global rich, not to mention the cadre of art dealers who cater to them, the Biennale has become an unofficial forum where consensus is formed about art market standouts. (On the first few days of opening festivities, people as varied as pharmaceutical heiress Maja Hoffmann, San Francisco-based philanthropist Pamela Joyner, Farah Pahlavi, the exiled empress of Iran, and U.K.-based magnate Poju Zabludowicz were spotted at various events throughout the city.) New artists are anointed as stars, and the status of existing art celebrities is reinforced.

“It doesn’t always make careers, but it definitely can make careers,” said Heather Harmon, a director of the New York-based art advisory KCM Fine Arts, which is helping to build billionaire Cirque du Soleil founder Guy Laliberté's collection, Lune Rouge. “Take the Anne Imhof [performance installation] at the German Pavilion. That’s going to be one of the great takeaways from this Biennial, namely that she’s one of the people who need to be paid attention to on a global level.”

Other standouts included a video by New York-based artist Rachel Rose in the Central Pavilion in the Giardini, Brooklyn-based artist Carol Bove’s sculptures in the Swiss Pavilion (Bove is co-represented by mega-dealer David Zwirner), and George Drivas’s installation at the Greek Pavilion, which included a shining, mirrored maze and a movie starring Charlotte Rampling. “On a grand scale, these works are speaking to a larger audience,” said Harmon.

Satellite ShowsHard to find (at least, less-publicized) shows have also emerged as must-sees, including the Future Generation Art Prize, which features an exhibition of 21 shortlisted artists in an ornate palazzo. One of the artists in the show is Njideka Akunyili Crosby, a Los Angeles-based artist whose last painting to sell at auction was estimated from 400,000 pounds to 600,000 pounds ($515,680 to $774,000) and sold for 2.5 million pounds ($3.2 million) in March at Christie’s London. Before that sale, just two of Crosby's works had ever gone to auction, according to Artnet. (Four of her works will be up for sale at next week’s New York auctions, carrying estimates that range from $40,000 to $2 million.)

Another must-see ancillary event is at the Palazzo Fortuny, a gothic mansion that Belgian dealer Axel Vervoordt turns into an exhibition space featuring contemporary photography, medieval drawings, neolithic sculptures, and Japanese pottery. “The whole art world is in Venice,” said Vervoordt, standing in the Palazzo’s courtyard on a drizzly Thursday morning as waiters in white coats served coffee and fruit skewers during a private opening. “All the collectors, all the art museum people, they’re all here. It’s the best period.”

Sweet SpotNot that Venice is the only art world event to attract a global audience. Art fairs, including Frieze in London, TEFAF in Maastricht, and Art Basel in Switzerland, attract comparable levels of wealthy collectors and influential curators, and the documenta art exhibition in Kassel, Germany, has a reputation for its outsized impact on curatorial taste.

But whereas documenta is often inscrutably avant-garde, and art fairs are by definition strictly commercial, Venice manages to find a sweet spot somewhere between the two. “As someone that goes to art fairs, the level that you find here is so much more elevated,” said Maramotti as she prepared to go inside the Dogana. “The intellectual energy of this is way more interesting to me.”