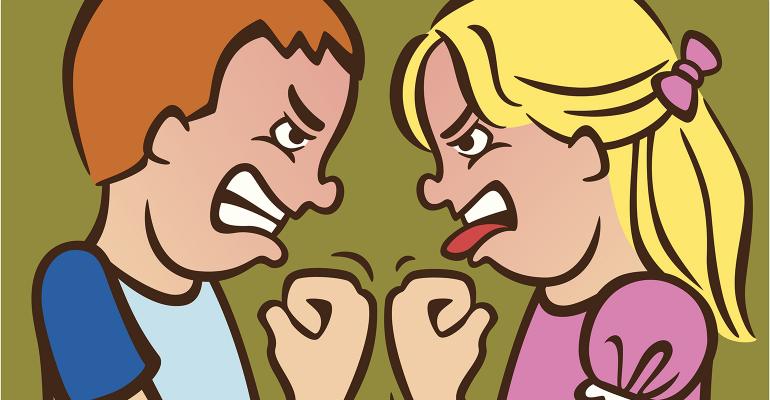 What Siblings Fight About and How Advisors Can Help

Sibling conflicts over finances are less common than they seem, but when they do arise, chances are they center on the parents.

According to new research from Ameriprise Financial, only 15 percent of siblings have conflicts over money with their brothers or sisters. The research, unveiled on Wednesday, was collected as part of the ongoing Ameriprise Family Wealth Checkup, which surveyed 2,700 Americans, including more than 1,900 with siblings, between the ages of 25 and 70.

When siblings do go to battle, the focal point is likely their parents, as 68 percent of financial conflicts among siblings center on their folks. Within this category, the most common areas of argument include division of inheritances, the financial burden of supporting parents in their old age and whether parents are being fair in their financial support of the siblings. Different money values or spending habits (56 percent) and varying levels of income (46 percent) among the siblings are also common trigger points.

Unsurprisingly, communication is the key to cutting off such conflicts before they have a chance to fester. Marcy Keckler, vice president of financial advice strategy at Ameriprise Financial, notes that through this research she’s noticed “a strong correlation between families who communicate about finances and feeling a lot more financially confident.” However, where siblings need the most help is not in starting the conversations—roughly two-thirds of siblings regularly discuss money with one another—but in doing so in a manner that’s appropriate and ultimately constructive. While siblings talk about money more often than you’d think, the most common topic they address in these chats (58 percent) is other relatives' financial situations—more gossip than constructive discussion, really.

Talking about oneself and one’s immediate family is a bit more uncomfortable, as although 56 percent of respondents claim they discuss personal long-term financial goals with their siblings, some major issues are never talked about in the majority of homes. For example, 66 percent of respondents have never spoken about life insurance with their siblings, followed by saving for a home at 58 percent and managing debt at 55 percent. It’s in these spaces where future conflict lies.

Keckler believes that “financial professionals can really distinguish themselves by offering to facilitate a conversation either among siblings or between adult children and parents about these topics.” Even if the client isn’t quite comfortable dragging their family into your office, she explains that advisors can still play a role. “Provide the client with two to three key questions to serve as thought-starters. The broaching of the subject can be done by the financial advisor to the client, who can then use that interaction as the catalyst to make that conversation with the rest of their family feel a little less out of the blue.”

The twin elements of comfort and respect play key roles in the success of such conversations. Planning the meeting in advance ensures that nobody feels ambushed and that everyone is mentally ready to at least entertain having such a talk. It also makes it more likely to happen in the first place. Keckler also notes that “a second key step is to make sure that everyone’s voice is heard. In sibling dynamics, it can be common that one sibling is much more forthcoming, but it’s important that everybody has their say and feels that they’re heard.”

This second element is much easier said than done. According to the study, 44 percent believe that they’re more financially knowledgeable and responsible than their sibling, as compared twith only 18 percent who admit to being less capable. It doesn’t take a mathematician to see that those numbers add up to conflict. How are advisors to overcome these hurdles of client overconfidence, lack of confidence in one’s sibling or both, particularly if the siblings have differing levels of financial means (as 63 percent do)?

Keckler explains, “If a financial advisor has a client who has more financial resources, encourage that client to see the value of the contributions their siblings can make and vice versa.” That total package of support, whether it’s financial, practical, pragmatic, or time and attention, all of those things need to come together.”

“I think financial advisors can play a role to help make sure that there’s appropriate valuation of different types of contributions, and that they all have importance.”