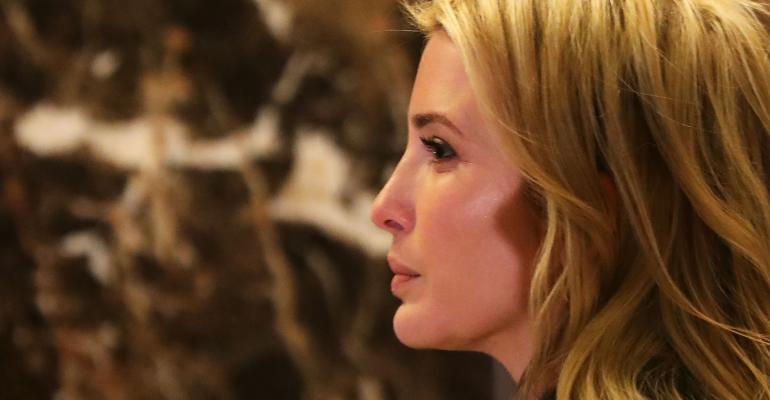 What’s in Ivanka Trump’s Art Collection, and What Is It Worth?

Ivanka Trump’s apartment, which stars in many of her 2,781 Instagram posts, seems to telegraph contemporary good taste.

(Bloomberg) -- Ivanka Trump’s apartment, which stars in many of her 2,781 Instagram posts, seems to telegraph contemporary good taste. There’s a funky light fixture by designer Lindsey Adelman in the dining room, vintage chairs and a shiny gold coffee table by the Belgian designer Fernand Dresse in the living room, and a custom-made whitewashed driftwood table in the foyer designed by Kelly Behun. The overall aesthetic is that of low-key affluence, the likes of which is found in hundreds of upscale hotels around the globe.

The art in Trump’s apartment is a different matter. An Ivanka Trump-branded purse in front of a work by Christopher Wool.

An Ivanka Trump-branded purse in front of a work by Christopher Wool.

The Art
In one post, Trump shimmies in front of a Dan Colen “chewing gum” painting; a comparable work sold for $578,500 at Phillips New York in 2012. In another post, Trump’s child plays the piano in front of a “bullet hole” silkscreen by Nate Lowman; a bullet-hole painting in the same palette sold for $665,000 in 2013 at Sotheby’s in New York. In yet another post, taken from a Harper’s Bazaar shoot, Trump poses at her dining table in front of a work by Alex Israel. A similar painting by Israel sold for $581,000 in 2014 at Phillips New York.

There are more than a dozen works on view in Trump's apartment, including a series of prints by conceptual artist John Baldessari, a massive work by art-market juggernaut Christopher Wool, a small piece by the up-and-coming artist Will Boone, prints by photographer Mariah Robertson, and a small, colorful abstract painting by the young art-world star Alex Da Corte. Much of Trump's art, dealers said, was purchased with the assistance of adviser Alex Marshall. Many wealthy, aspiring collectors employ art advisers (Marshall's mother, Patricia, is one of the most powerful in the world), not only for recommendations about what to buy, but because those advisers have access to work that would be unavailable to art-world outsiders. Both Marshall and Trump did not respond to requests for comment. Now that the 35-year-old Trump daughter is taking a larger role on the world stage thanks to her president-elect father (and, in part, her reticent stepmother), the cultural choices she makes have received increased scrutiny. Her 2 million followers on Instagram have long felt that they knew her; now the world is looking at the pictures of her pajama-clad children in front of important artworks and trying to deduce hints of what "high culture" in Trump's America might look like. She may, for example, have a hand in choosing the artworks on display in the White House in the new administration. She could also help to choose the artists from whom her father commissions official portraits, or even affect the way the National Endowment for the Arts is administered.

Artist Pushback
Trump's investments in the young artists mentioned above have given those artists a feeling that they have a conduit to Donald Trump, or at the very least a heightened platform to voice their concerns about the incoming administration. "Through her collecting and social appearances, Ivanka Trump belonged to a certain degree to our world," said curator Alison Gingeras. There's the added motivation to push back against Trump because her art collection has “become a form of branding,” said dealer Bill Powers, who sold Trump an artwork by Louis Eisner in 2013 through Marshall, the adviser. “I think there are a lot of artists that are uncomfortable now being incorporated, or leveraged, as part of the Ivanka Trump brand.” A protest outside the Puck Building in SoHo.

A protest outside the Puck Building in SoHo.

To that end, the Halt Action Group (HAG), founded by Gingeras, Powers, artist Jonathan Horowitz, and several others, initiated a campaign called “Dear Ivanka.” The group has an Instagram feed in which they repost glossy stock images of Trump along with earnest appeals about what they foresee as the dire consequences of her father's politics—topics addressed include global warming, universal health care, and contraception policy. Hoping to "thwart the normalization of what was unfolding in front of our eyes,” Gingeras said, the group, comprised of artists, dealers, psychoanalysts, and even a few collectors, reached out to the artists featured in Trump’s Instagram feed. They asked the artists to join them and ask Ivanka "to answer for some of the hypocrisy she embodies,” Gingeras said.

Many of the artists contacted by HAG responded forcefully. Underneath a photo of Trump posing in front of a painting by Da Corte, the artist wrote: “Dear @Ivankatrump please get my work off of your walls. I am embarrassed to be seen with you.” Under a different post, Israel wrote: “Please stand with artists and so many people around the world who believe that America means equality for all people.” Lowman and fellow artists Cecily Brown and Rob Pruitt joined a HAG-organized march outside the Puck Building, which is owned by Trump’s husband’s family.

Part of the aggressive response by artists, of course, is the result of what's perceived as a rapid shift in tone by Trump and her husband. "No one could have anticipated [Donald] Trump's policies and how horrible he's turned out to be, and no one could have anticipated that his daughter and son-in-law would agree with him," said Brendan Dugan, the founder of bookstore/gallery Karma, which has exhibited several artists in Trump's collection. "The real argument is that the art world is primarily a marketplace, and if you have money, people will sell you things. I think maybe this is a wake-up call."

Indeed, for the many people who were happy to sell to Trump when she was a mere socialite and businesswoman, her newfound political profile has proved a powerful catalyst. “It’s a moment of reckoning,” Gingeras said. “Going forward, we need to think more carefully about how our work gets brought to the world, and who it’s sold to.”

Powers, in contrast, described the current predicament faced by many of the Trump-owned artists as inevitable. “I don’t think it’s particularly unique, this divide between people that make art and the people that collect it,” he said. “I think there’s probably a lot more Republicans buying art than there are making it.”