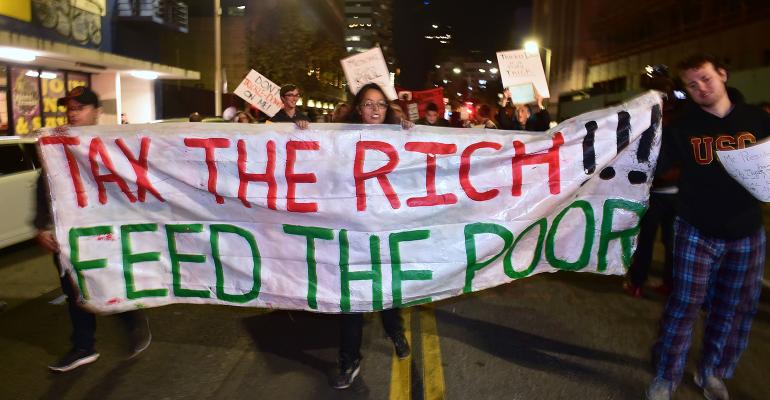 The Wealthiest 1% Can Be Good for Everybody

Inequality between the very richest and the rest correlates with greater innovation. But we mustn't let the top level become a closed shop.

(Bloomberg Opinion) -- The share of income and wealth going to the so-called “1%” has incensed protesters and agitated economists around the world. From the Occupy Wall Street movement to the work of academics such as Thomas Piketty and Gabriel Zucman, attention has zeroed in on what the super-rich earn and own, and on how governments should use taxes for redistribution.

Such policy ideas have taken center stage in the primaries of the U.S. Democratic Party, which decide who will challenge President Donald Trump in 2020. One of the runners, Senator Elizabeth Warren, advocates a 2% wealth tax on fortunes above $50 million. She has found unlikely billionaire allies, including the investor George Soros and Facebook Inc.’s co-founder Chris Hughes, who say they’d accept a levy on their riches to “help address the climate crisis, improve the economy, improve health outcomes.”

These are all smart people but there’s a danger they may be missing something here. The French economist Philippe Aghion points out that there’s a direct correlation between high levels of inequality in favor of the top 1% and innovation (the creation of new technologies). Given that every country is eager to foster innovation – because it brings huge economic benefits – might there be an argument that a concentration of wealth at the top isn’t necessarily a great evil?

Aghion’s view is that instead of seeking to punish the 1%, the main priority for governments should be to ensure that the top strata of the wealthy isn’t allowed to remain a closed shop – that is, new innovators must be free to challenge and replace incumbent companies. Given the entrenched positions of giant technology companies such as Alphabet Inc., Apple Inc. and Microsoft Corp., this is going to need a bit of work.

The London School of Economics professor, who presented his findings in Paris last month, also said there was no evidence that faster innovation would produce more inequality further down the income scale. This is only about the difference between the 1% and the rest. And he said increases in innovation were linked to better social mobility. Aghion believes that new inventions give people the chance to rise up the ladder faster.

Indeed, mobility (admittedly at the top end) is the prime motivation for all those technology pioneers in the first place. They want to make enough money to join the ranks of the very wealthiest. Aghion’s conclusion, in line with the tradition of the Austrian economist Joseph Schumpeter, is straightforward: Companies come up with new processes and products to generate and appropriate “rents.” Governments shouldn’t target these extra profits excessively since it would stifle the desire to innovate.

This doesn’t mean there’s no role for public policy. Quite the opposite. Aghion also showed how all is not well in innovation-land. The growth rate of total factor productivity, a measure of efficiency, rose sharply in the 10 years after 1996 but then declined. In particular, productivity growth among tech companies and firms that are the biggest technology users appears to have peaked respectively in the mid-1990s and in the mid-2000s, and has slumped subsequently.

Meanwhile, as the academics Jan De Loecker and Jan Eeckhout have shown, companies are becoming ever more able to charge markups in excess of their costs. Yesterday’s innovators are enjoying a quietly untroubled and lucrative life today, which may well be down to the barriers to entry they themselves have erected.

While many on the left hanker after higher taxes to shrink the share of income and wealth of the 1%, it’s not even clear that they’re an effective tool. Aghion looked at the tax reforms introduced by the French president Francois Hollande in 2012, including a 75% tax on earnings above 1 million euros. He found that the changes prompted more of the ultra-rich to leave France but that any improvement in social mobility – measured as the number of people who have moved upward in the bottom 95% of the income scale between 2011 and 2015 – was extremely limited (although it’s too soon to draw strong conclusions).

So if we want to encourage the bursts of innovation that actually support genuine upward mobility, tackling the quasi-monopolistic practices of the biggest companies might be a better use of political energy. For years, Amazon.com Inc., Facebook  Inc., Google and their ilk have been subject to relatively little antitrust scrutiny. This may be changing: The European Union has fined Google three times for a total of about 8.2 billion euros ($9.3 billion) for abusing its dominant position. There are signs too that U.S. antitrust authorities are finally waking up to this problem.

Of course, proponents of higher taxes on wealth and income believe they can foster competition and social mobility. If they fund improvements in education, such thinking goes, that may help today’s poor become tomorrow’s champions. But France’s experience in 2012 poses questions about how much can be raised before wealthy individuals move abroad. In the U.S. there’s a vocaldebate over how much Warren’s wealth tax would actually bring in.

The rise of left-wing politicians such as Warren and Britain’s Jeremy Corbyn suggests a hunger among younger voters for much greater redistribution. While higher taxation may make the world fairer, there’s little evidence it will make the economy innovate more or grow faster. Robust competition enforcement is a better answer. Before you bash the rich, try busting the trusts.

To contact the author of this story:
Ferdinando Giugliano at [email protected]

To contact the editor responsible for this story:
James Boxell at [email protected]