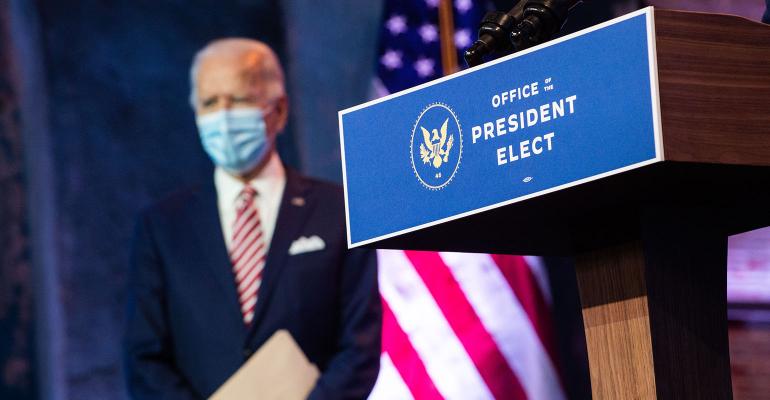 Although the politically driven urgency around tax planning has subsided, it’s still a valuable time to revisit your client’s plan.

While states haven’t officially certified their results, and the election process is complicated by recounts and court challenges, it’s widely anticipated that former Vice President Joe Biden has received enough electoral votes to serve as the nation’s 46th president of the United States.

The remaining two Senate seats, located in Georgia, will be decided in a January runoff, as none of the candidates for either seat was able to earn the 50% of the vote necessary under Georgia law to obtain victory. Therefore, unless Democrats win both of these runoffs, we’ll likely end up with a divided Congress.

With a “divided government” scenario appearing increasingly likely, let’s explore how these political outcomes might impact the wealth planning landscape.

If Republicans do retain control of the Senate, the tax policy changes proposed by President-elect Joe Biden during the campaign will likely have to be toned down. He does, however, have a reputation for being willing to work across party lines. As vice president in 2012, Biden was able to broker a deal with Sen. Mitch McConnell to extend the “Bush Tax Cuts” and avert a “fiscal cliff.” It’s therefore possible that we may see some tax policy changes as a result of negotiations, but we’re unlikely to see the more progressive campaign tax proposals, at least until midterms.

The potential divided government outcome suggests that the Tax Cuts and Jobs Act (TCJA) of 2017 will likely remain intact. Specifically, gift and estate tax exclusion amounts will likely remain high, historically speaking, for some time. This means that for 2020 clients can give away $11.58 million tax-free. This amount increases to $11.7 million per individual.

Exclusion amounts are likely to remain at these high levels for the next two years, at least until the midterm elections, and possibly until they’re scheduled to sunset under the TCJA at the end of 2025. At that time, exclusions will automatically revert back to $5 million (adjusted for inflation) per individual. Though there’s a reduced urgency to make gifts this year under a divided government, if your client can afford to make gifts—and it’s in line with your client’s long-term goals—I recommend that your client consider doing so sooner rather than later. This will ensure that they capture any future appreciation outside of your taxable estate and avoid future tax policy changes.

A divided government increases the chances that the top income tax rate will remain historically low, at 37%. Under the TCJA, this rate is scheduled to sunset at the end of 2025, when it reverts back to 39.6%. Given the current deficit and additional stimulus spending, it’s difficult to see how rates could go any lower. We certainly don’t expect to see the steep increases proposed by Biden on the campaign trail. Corporate tax rates will also likely remain low, at 21%, and there’s no planned sunset under TCJA at this time.

When tax rates are likely to hold steady, year-end tax planning involves determining where clients can defer income and gains into future years, while accelerating expenses and deductions this year. Clients should also consider exploring tax-loss harvesting opportunities, which involve selling investments and mutual funds to offset any taxable gains realized during the year.

In addition to being intentional about your goals, there are three strategies worth discussing with your clients, regardless of the election results:

The federal election also could have implications on states’ budgets, as hopes for a large economic stimulus bill have faded. Under a divided government, large-scale economic support to struggling state and local governments is less likely to be part of the program. Forty-nine states are required to balance their budgets, and many estimates currently show substantial shortfalls. This will likely put continuous pressure on states to raise taxes or cut programs.

I’m currently working with many clients who are considering whether to relocate their residence to low tax states, driven in part by increased flexibility to work from anywhere. Many are also considering whether to establish trusts to limit tax exposure. If done properly, incomplete gift nongrantor trusts may be able to shift the tax exposure out of a high-tax state, such as California, to a state where there’s no state income tax, such as Delaware, Nevada or Wyoming. Each state has its own rules about which trusts it considers to be a resident of that state, which underscores the need to consult with professionals before considering this strategy.

Tax law uncertainty and the potential for a “Blue Wave” leading up to the election encouraged many wealthy individuals and families to revisit their estate plans and review available tax strategies. Although the politically driven urgency around tax planning has subsided, it’s still a valuable time to revisit your client’s wealth plan given the low interest rate environment, potential federal and state tax increases due to the growing deficit, state tax proposals driving relocation and low asset valuations, which may recover with the economy.