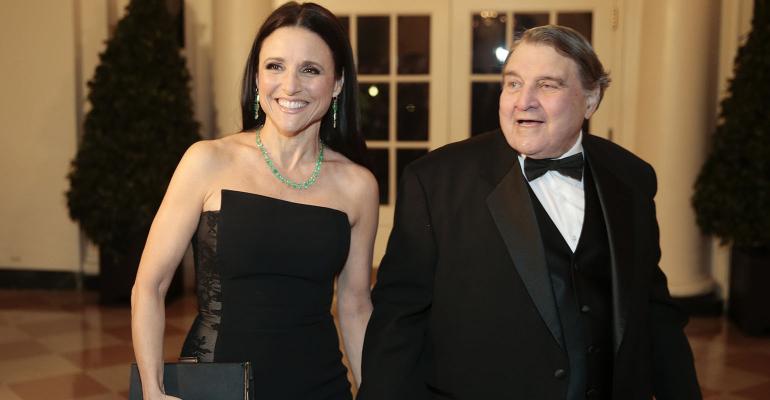 <p><em>Veep </em>star Julia Louis-Dreyfus&nbsp;dedicated her Emmy award on Sunday night to her father, who died on Friday.</p>
Wealth Planning>High Net Worth

While accepting her Emmy Award for Outstanding Lead Actress for her portrayal of President Selina Meyer on HBO's Veep, Julia Louis-Dreyfus dedicated the award to her father, whom she revealed passed on Friday.

While there’s normally nothing remarkable about an actor dedicating an award to a deceased parent or friend, Louis-Dreyfus’ case is a bit different, as her father was billionaire Gerard (aka William) Louis-Dreyfus. Most people assume that Julia is wealthy from her run as a successful actress (she’s worth a reported $200 million), but few know that she was born into an enormous fortune—though it wasn’t exactly a secret; she once narrated a documentary about her father’s art collection—and would have been wealthy even if she’d never worked a day in her life. For once, however, Julia may be the less interesting part of a story, as her father’s estate looks to present some intriguing possibilities.

William, whose net worth is estimated at about $3.4 billion by Forbes, was a successful French-born businessman and attorney and a scion of the wealthy Louis-Dreyfus clan. His grandfather, Leopold Louis-Dreyfus, founded the Louis Dreyfus Group, a major global player in agricultural commodity trading to this day. Given that William was both the recipient of major generational wealth and a successful wealth creator in his own right, it’s likely that his estate planning documents are in order. Much of his assets likely are held in trusts and other vehicles created before he was even born, let alone whatever planning he's done during his life. That being said, the administration of his estate is likely still worth following.

He leaves behind a blended family. He divorced Julia’s mother one year after Julia was born and remarried, fathering two daughters in his second marriage, both of whom are social workers. Blended families create complications in the best of times and this family in particular has some interesting wrinkles. First, none of William’s children work in the family business (other relatives run it), which could create some friction when it’s time to pass on his interests there. Further, though it’s unlikely that any of the Louis-Dreyfus kids really need the money, Julia does have her own wealth in addition to whatever she stands to inherit, as opposed to her social worker sisters, a profession that, last I checked, isn’t as richly compensated as being a famous actor. So, how William decides to divide his bequests between the children, not to mention his two spouses, should be informative.

That’s not to say, however, that he will leave his direct family everything. In 2015, William announced that he would not be passing on his aforementioned art collection, roughly 3,500 pieces worth an estimated $50 million, to his children, but instead would require that the works be periodically sold and the proceeds donated to the Harlem Children’s Zone, an educational nonprofit that aims to prevent generational poverty. Interestingly, he found out about the group from an episode of 60 Minutes—the power of television in action!

In an interview with Barron’s, William said of the gift, “I realized one morning that my children do not need to be any richer than they are, and they did not need the spoils from my collection.” Instead, “I could do something good, and that I believe in.”

When you combine a dynastic multi-billionaire who thinks like that with a complexly blended family that just so happens to feature a world-famous daughter and throw in a family business for good measure, you end up with an estate to watch, even if everything is in perfect order.