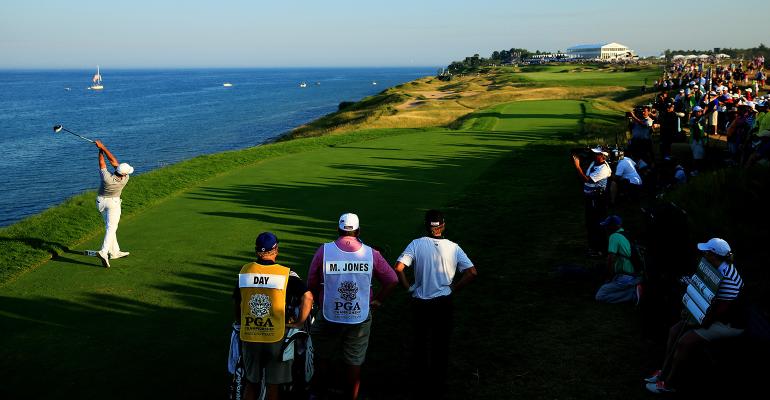 The Value of a Family Name: Kohler and Nicklaus

Golf season in Wisconsin may be short, but for that reason it’s intensely enjoyed. In the summer months, golfers fill the many courses across the state. Behind two of these courses are two names that intersect in interesting and illuminating ways—Jack Nicklaus and Herb Kohler Jr. These courses are two of the finest public courses in America, separated by a picturesque 15-minute drive, and owe their existence to these two men. Whistling Straits, the inspiration of Herb Kohler Jr., opened in 1998 and has hosted the PGA Championship three times. The Bull at Pinehurst Farms, designed by Jack Nicklaus, opened to rave reviews in 2004 and is considered one of his finest designs. One man, an iconic golfer seeking success in the world of business; the other, an iconic businessman seeking success in the world of golf. Yet, the radically different path each man has taken reveals some insights into how a family name can become truly valuable.

Jack Nicklaus’ success in golf has been a lifelong endeavor, from winning local competitions in Ohio at the age of 10 to building one of the most recognizable brands in the game. Nicklaus attended Ohio State from 1957-1961 in the pre-pharmacy program, and had every intention of following his father into his successful pharmacy practice in Ohio, but his success on the golf course could not be denied. After resisting years of pressure, he finally turned professional in 1961. He proceeded to dominate competition for the next 35 years, including winning a record 18 major championships.

In the midst of his playing success, Nicklaus created Nicklaus Design, which has designed nearly 400 courses to date in over 36 countries. In 1996, as his competitive play was winding down, he stepped up his efforts and started Nicklaus Companies. Nicklaus Companies designs courses, sells apparel and licenses the “Golden Bear” name and icon to dozens of other products. Nicklaus earned just over $9 million in winnings during his playing career. In 2006, Nicklaus sold 49 percent of the company for $145 million. Today, his net worth is estimated at $320 million.

The legacy Nicklaus built isn’t simply about financial success. In a recent interview, Nicklaus explained: “I figured branding has to be the future, something to last not only in my lifetime but to create a legacy beyond my lifetime.” With eight distinctly different partnerships—from ice cream to wines—all leveraging the Nicklaus name, his companies have afforded opportunities for his children. One of his sons is the president of Nicklaus Design. Another is on the board. A third son is president of Golden Bear Realty. One generation spawns opportunity for the next.

Furthermore, Nicklaus extended his family name to the philanthropic world by supporting causes important to him and his family. The Nicklaus Children’s Health Care Foundation was created in 2004 to support pediatric care at a number of hospitals across the nation. In 2015, the Miami Children’s flagship hospital was named the Nicklaus Children’s Hospital in honor of all the support it has received from the foundation over the years. In addition, a number of the licensed products also include a charitable component. Nicklaus has effectively leveraged the family name to financially benefit from his status while diversifying his sources of income. At the same time, he has created opportunities for the next generation and shared his personal values in the process.

Kohler was a well-known brand name before Herb Kohler Jr. even considered joining the privately held manufacturing firm. Nonetheless, eventually Herb Jr. moved into a leadership role and by 1972, he became the head of the $150 million company and enacted dramatic changes. Kohler was the second largest producer of plumbing products in the U.S when Herb Jr. assumed leadership. At the time, he saw the potential for innovation.

In 1978, Kohler set aside 800 acres to create a members-only hunting and fishing club, River Wildlife. Three years later he opened the American Club, a luxury resort created from the fully renovated historic building that formerly housed company employees. It was the guests of the resort who suggested adding a golf course, which lead to the opening of Blackwolf Run.

The overriding principle in all these changes was not simply opportunistic investment; rather Kohler progressively built a new vision for the historic company, now encapsulated in the company tagline, “Gracious Living.” The family name has become synonymous with quality.

This personal commitment is shared by Herb Kohler Jr.’s son, David Kohler, who was recently named president and COO of the firm. David explains one of the critical lessons he learned from his father, “We love the creative process more than anything else we do, whether it’s creating a strategy or driving innovation in a new product or pioneering in a market like India.” He goes on to explain that passion cannot be forced, rather it has to happen naturally, but when it is internalized as a personal value it generates an enduring belief in the future. If creativity drives the firm, the best days are ahead. This is the “gift of the present” which Emerson praises, while being fully grateful for the “luster” granted by the significant efforts of the past.

Often, a family name can be leveraged for opportunities that would be more difficult for a brand identified with a product. A well-regarded brand may have some difficulty with market perception when crossing into unrelated industries. It’s often easier for others to follow the extension of identity through a personal brand, than through a product brand.

The future of the Kohler and Nicklaus names is neither assured nor inevitable. The continued success of a family name starts from an appreciation of past accomplishments, but relies on the pursuit of new opportunities going forward.

The real success in each of these family stories to date, however, is the ability to change lives for the better, through career opportunity, environmental efforts, historic preservation or philanthropy. In the process of making lives better, a set of values is also passed along that leads to success.