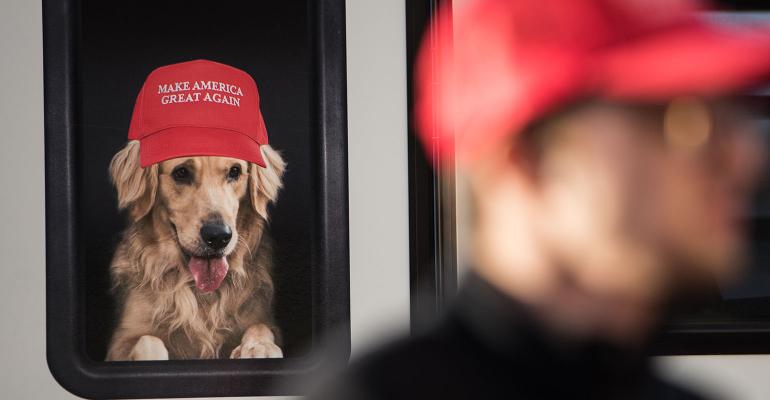 Trump Plan Seen Turning `Everyone and Their Dog' Into an LLC

The "LLC loophole" would slash rate on pass-through businesses to 15%.

(Bloomberg) --The Trump administration’s proposal to slash the tax rate on partnerships and limited liability companies could set off a stampede of individual taxpayers trying to reclassify themselves as so-called pass-through businesses in order to take advantage of the savings, according to tax experts.

Call it the Kansas problem.

In 2012, Kansas exempted pass-throughs from state income taxes, a move that was billed as a chance to spur so much business growth and job creation that it would actually raise money for the state treasury. Instead, an unexpectedly large number of taxpayers began calling themselves pass-throughs, and state tax revenues fell by hundreds of millions of dollars. Kansas lawmakers passed a bill to eliminate the exemption, which was derided as the “LLC loophole,” but Governor Sam Brownback vetoed the measure.

Now, Trump’s administration wants to try a similar move. Pass-through businesses -- which include small businesses like corner stores and free-lancers but also doctors, lawyers, consultants and vastly profitable hedge funds -- get their name from the way they file taxes: The businesses pass their income through to their owners, who then pay tax based on their individual income-tax rate.

The top individual income-tax rate is now 39.6 percent, though Trump’s plan would cut that to 35 percent. But for pass-through businesses, he’d cut it even more: to just 15 percent.

Cue the rush among high-earning individuals to recast themselves as LLCs, sole proprietorships or other pass-throughs. “Absolutely!” said J. Richard Harvey, a tax law professor at Villanova University and a former senior official at both the Internal Revenue Service and the Treasury Department. “If a taxpayer has a choice between paying at a 15 percent top rate versus a 35 percent rate, the taxpayer and their tax planners will be working feverishly to take advantage of the 15 percent rate.”

Trump’s plan was applauded by many small-business groups and Republicans, who say it would remedy an inequity in the current tax code, which taxes corporations at a maximum rate of 35 percent, while subjecting much pass-through business income to the 39.6 percent individual rate. Trump’s initiative would apply the same 15 percent rate to pass-throughs and multinational corporations.

“We support efforts to treat America’s small business community just as their corporate counterparts and that requires an equal playing field when it comes to our tax system,” The National Association for the Self-Employed, which advocates on behalf of the 27 million Americans who file their taxes as self-employed, said in a written statement.

But many tax-fairness advocates say that comparison is mathematically unsound. In addition to the current 35 percent tax on corporate profits, any dividends paid by corporations are also taxed as investment income received by the shareholders who collect them, at rates up to 23.8 percent. But pass-through income is taxed only once, said Chuck Marr, director of federal tax policy at the Center on Budget and Policy Priorities.

“The notion that this plan would achieve parity is a false comparison,” Marr, a former economic adviser to Senate Democrats and the Clinton White House, said. “Most of the savings of this change would go to the wealthiest businesses and the top 1 percent. But politicians love to stand up and say they are defending small businesses, so I fear it’s an argument that isn’t going away.”

Meanwhile, budget hawks worry that the steep cut would cause massive increases to the federal deficit -- as much as $1.5 trillion over the next decade, according to the conservative Tax Foundation. Gauging the precise costs and benefits of Trump’s tax plan is difficult because the administration has released few details about how it would be implemented.

Given that about 70 percent of pass-through income comes from banks, hedge funds and holding companies, the cut would be a boon for the financial services industry and many of the wealthiest taxpayers. Because Trump’s business interests derive millions in earnings from real estate, critics have accused the President of proposing a tax windfall for himself.

White House spokesman Sean Spicer brushed aside that concern Thursday, saying that average taxpayers are far more interested in how Trump’s plan would affect their own pocketbooks.

“I would guess that most Americans would applaud what the president is doing to spur economic growth and job creation in this country,” Spicer said.

Treasury Secretary Steven Mnuchin has pledged that the new pass-through rate would be implemented in a way that “won’t be a loophole for rich people who should be paying higher rates,” but has not released any details about rules that might deter abuse.

David S. Miller, a tax lawyer at Proskauer Rose LLP, said the proposal could be tailored to restrict the size or types of pass-throughs eligible for the 15 percent rate.

“There are ways to write rules that would limit who could pay the lower rate -- by eliminating service providers or restricting it to businesses below a certain size,” Miller said.

Trump’s plan faces many hurdles in Congress and within the Treasury Department. But if enacted, it would present a challenge to the IRS, which would have to determine whether any influx of new pass-through businesses was legitimate. During the past decade, the agency has seen steep funding and manpower cuts that drastically reduced the number of classification audits it performs, said Garrett Gregory, a former senior attorney at the IRS until 2014 who worked in the agency’s large and mid-size business and international unit.

Gregory said classification audits are notoriously time-intensive -- involving a 20-part test -- so the prospect of retraining auditors would strain an already overburdened workforce.

“The IRS manpower is so low that it’s not like you have a lot of people sitting around twiddling their thumbs,” he said. “So it’s not a good time to have to retool them and redeploy them overnight. But there would be no choice. Otherwise, everyone and their dog will be filing as an LLC.”