/sites/all/themes/penton_subtheme_wealthmanagement/images/logos/footer.png
Recent
Recent
Cresset and Meristem Merge to Create $27B AUM Multi-Family Office
May 25, 2022
Know the Rules: State Residency and Taxation for Individuals, Trusts, and Estates
May 25, 2022
Boston’s Old Suffolk Downs Racetrack Begins Conversion to Massive Development
May 25, 2022
The Healthy Advisor: Getting Financially Sober With Matthew Grishman
May 25, 2022
Featured
The 10 Best and 10 Worst States in Which to Retire in 2021
Jul 15, 2021
Poll: 15 Classic Books on Investing and the Markets
Apr 03, 2020
Fifteen Must-Listen Business Podcasts for Advisors
Aug 14, 2020
Celebrity Estates: Jay Leno and Planning for Classic Car Collections
Feb 22, 2022
Bloomberg
brought to you by 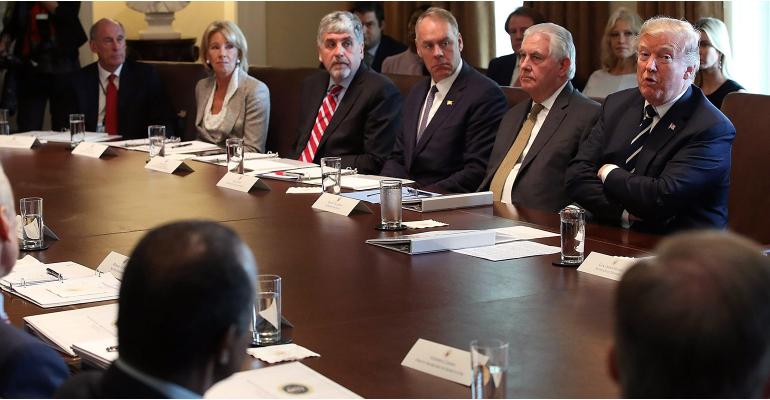 A study by the Center for American Progress finds big tax breaks for President Trump and many of his billionaire Cabinet members.

(Bloomberg) --President Donald Trump’s tax framework could save him and members of his cabinet tens of billions of dollars in taxes collectively, according to a report from a left-leaning policy organization released by Senate Democrats.

The White House and GOP leaders’ tax plan unveiled last month calls for ending the estate tax and slashing the tax rate for pass-through businesses. Those two provisions could cut taxes for Trump and members of his cabinet including Secretary of Education Betsy DeVos and senior adviser Jared Kushner, the study says.

Senate Minority Leader Charles Schumer of New York and Senator Elizabeth Warren of Massachusetts plan to release the Center for American Progress Action Fund’s findings during a news conference Wednesday. The event comes as Trump is scheduled to meet with Democrats from the tax-writing Senate Finance Committee, including Senator Ron Wyden of Oregon. Wyden has questioned recent claims from the White House that its plan to cut the corporate tax rate to 20 percent from 35 percent would mean a pay increase of at least $4,000 for the average household.

The findings by CAP Action contrast with the message Trump has been delivering during his tax speeches over the past few months -- that the middle class would be the biggest beneficiaries under his plan, and neither he nor his “rich friends” would benefit.

The White House didn’t immediately respond to a request for comment.

Trump reaffirmed his commitment to abolishing the estate tax on Tuesday night during a speech to the Heritage Foundation, a conservative policy group. “We are ending the horrible and very unfair estate tax, also known as the death tax,” he said to applause.

The Republican tax framework calls for slashing the rate for partnerships, limited liability companies and other so-called “pass-through” businesses to 25 percent -- down from a current top rate of 39.6 percent. While the White House has pitched the change as a boon for small business owners, CAP Action says 86 percent of taxpayers with pass-through business income are already in the 25 percent tax bracket or lower.

Trump’s financial disclosure forms show that he has interests in roughly 500 entities, most of which are organized as limited liability companies. That could mean an annual tax break of $23 million under the pass-through change, according to the study. DeVos could get an annual break of as much as $5 million, while Kushner could see an annual tax cut of as much as $17 million, the study said. The group based its findings on financial disclosures by the candidates and prior Bloomberg News estimates of Trump and cabinet members’ net worth.

The estate tax is a 40 percent levy applied to estates worth more than $5.49 million for individuals or $10.98 million for couples. Although Republicans say it penalizes small businesses and farmers, data from 2013 show that just 3 percent of estates subject to the tax were businesses and farms, according to the Tax Policy Center.

Eliminating the estate tax could provide a combined $3.5 billion “windfall” to the estates of about half of the current members of Trump’s cabinet, including Trump, Commerce Secretary Wilbur Ross, Secretary of State Rex Tillerson and Treasury Secretary Steven Mnuchin, according to CAP Action.