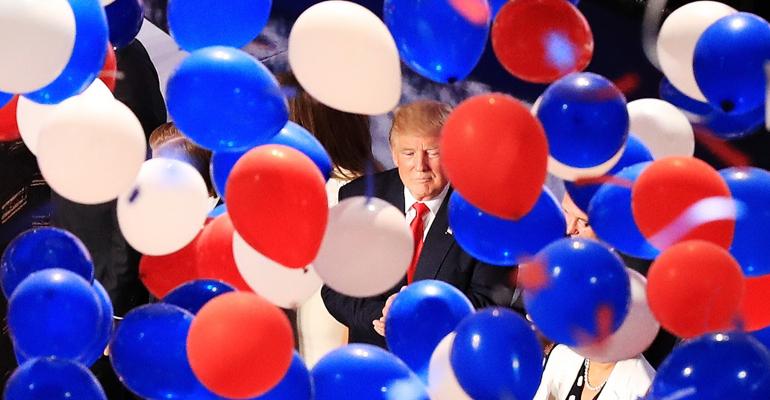 Trump Has a Family Foundation. Why Don’t Your Clients?

(Bloomberg) --Everyone who is anyone, it seems, has a family foundation. And then some.

More than 40,000 of these tax-exempt organizations were actively making grants in the U.S. as of 2014 , according to the Foundation Center. Among the more than 5,600 such foundations in New York is one headed by President-Elect Donald Trump, which acknowledged in a recent filing with the Internal Revenue Service that it had engaged in self-dealing.

IRS guidelines say self-dealing is "transfer to, or use by and for the benefit of, a disqualified person of the income or assets of a private foundation." Those that fall into the disqualified category include big contributors to the foundation, officers, directors or trustees, and family members. Violating those prohibitions can bring an excise tax of 10 percent on the amount in question and, ultimately, a surge in that tax to 200 percent. The head of a foundation may also have to repay the money in question.

People set these structures up to create a more organized and efficient way to support their favorite causes, leave a legacy in hopes of sustaining those causes, and get a nice tax deduction for the annual sums they contribute to the foundation. Many families use foundations as part of estate planning.

If you or your family members are active trustees of a family foundation, you can pay yourself "reasonable" compensation. At very large foundations, the founder and family members may not take salaries. Trump and the other officers at his foundation, which include his son Eric and his daughter Ivanka, don't take a salary, according to documents filed with the IRS.

"There are things that go on at family foundations that raise an eyebrow," said Daniel Borochoff, president of CharityWatch. For example, he said, "you'd think an independent person should determine what the head of the foundation is paid." Some foundations do hire independent consultants to benchmark salaries.

There's another foundation associated with a Trump family member, the Eric Trump Foundation, but it is a public charity. It's tied to an annual fundraiser, a golf invitational held at Trump National Golf Club, in Washington, D.C. Its goal: "Provide monetary or financial aid exclusively for charitable, religious, scientific, literary or educational purposes and to solicit, receive, maintain and disburse funds for these purposes and for the betterment of children," according to the documents.

Eric Trump's foundation gave about $1.2 million of the proceeds from the golf invitational to St. Jude's Children's Research Hospital, according to the foundation's 2014 filing to the IRS in November 2015. It also gave $37,000 to the Staten Island Zoological Society, $55,000 to a dog shelter in North Carolina, and $10,000 to the North Shore Animal League. Lara Yunaska Trump, Eric's wife and a director of the foundation, is an animal welfare advocate. The filing notes that the charity paid $87,665 to a related party to use the golf club for the invitational.

An old rule of thumb is not to bother setting up a family foundation unless you're going to fund it with at least $5 million. There are now foundation management companies, such as Foundation Source, that say they can lower the setup costs so "it's practical to start a foundation with as little as $250,000 and grow it over time." Among the biggest foundations in the U.S. is Bloomberg Philanthropies, established by Michael Bloomberg, the founder and majority owner of Bloomberg LP, the parent of Bloomberg News.

There are easier ways to give to charity that still afford donors a lot of control. Like, write a check. Or consider the donor-advised fund, a rapidly growing alternative that can be seeded with as little as $5,000 and doesn't require the setup expense or public disclosure a foundation does. DAFs can be set up through charitable arms of such companies as Charles Schwab Corp. and Fidelity Investments or through a community foundation. There are about 270,000 DAF accounts in the U.S., according to the National Philanthropic Trust.

When you give money to a DAF, you're giving it to that charitable arm and ceding control of those funds. You instruct the organization on where you'd like the money to go and get a tax deduction for the full amount when you contribute it to the DAF.

DAFs have their critics. One is the super-philanthropist Lewis Cullman, who co-authored a July article in the New York Review of Books titled "The Undermining of American Charity." There, Cullman and Boston College law professor Ray Madoff note that with DAFs, "no deadline is imposed for the eventual distribution of these funds to an operating charity." Therefore, they write, "the effect of these rules is that assets that have been given the tax benefits of charitable donations can be held in a DAF for decades or even centuries, all the while earning management fees for the financial institutions managing the funds, and producing no social value."

"Technically, it's called donor-advised, but in reality it's donor-directed or -controlled," he said. "'Legally you give up control, but the DAF is not not going to honor your wishes. It's got this 'wink wink' kind of thing."