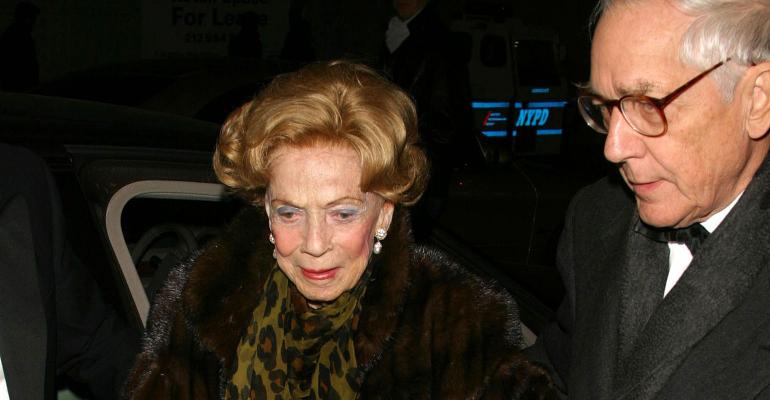 Advisors need to help monitor and curtail fraud and exploitation.

(Bloomberg View) --In 2006, Philip Marshall had to make a critical decision: turn in his father for exploiting Philip’s grandmother, or do nothing. Philip's decision to act revealed to the world what remains perhaps the world's highest profile case of elder abuse. Ultimately, Anthony Marshall was convicted of defrauding his mother, the philanthropist Brooke Astor.

While the million-dollar sums involved in the Astor case were unusual, elder financial abuse unfortunately is not. Greater data sharing among financial institutions, along with specific safeguards against financial fraud, could root out this kind of exploitation of our most vulnerable citizens.

As Americans live longer, more and more will experience cognitive impairment great enough to put them at risk of financial abuse. Consider that by 2030, 20 percent of the population will be at least 65 years old. About 12 percent of people have mild cognitive impairment or dementia by the time they're 70 to 74, and among those 85 and older, 64 percent do.

People with MCI face two big risks from the people involved in their lives: financial exploitation and outright fraud. Exploitation includes cashing someone’s checks without permission, forging signatures, or improperly using the authority of conservatorship, guardianship or power of attorney. Fraud involves efforts to deceive someone with promises of goods, services or financial benefits that may not even exist. Estimates of the extent of such abuse in the U.S. vary widely — from $3 billion to $36 billion a year — but whatever the present total, the problem stands to grow unless steps are taken.

Banks and other financial institutions can help prevent financial crime against elders at all levels of wealth and income, starting by raising awareness of the problem within their own walls. They should encourage their customers to plan for potential diminished capacity by designating one or more trusted emergency contacts, securing a power of attorney for finances, and consulting a financial manager. Financial institutions can provide read-only access to deposit accounts to enable people's trusted contacts or financial managers to monitor activity and detect anything improper. Banks should also make a habit of reporting suspicious activity to the U.S. Financial Crimes Enforcement Network. And they should help local adult protective services and law enforcement investigate and prosecute those responsible for wrongdoing.

Institutions may be understandably reluctant to put holds on suspicious electronic transfers and deposits, because they are legally bound to expedite those processes. What's more, federal and state privacy laws may discourage them from sharing with other institutions information about potentially suspicious activity.

Yet there is no real need for hesitation. When elder financial fraud or exploitation is suspected, banks and other institutions are free to share a customer’s personal information with federal, state and local investigators and still be compliant with privacy laws, according to guidelines issued by banking and securities regulators in 2013. Around that same time, a check box for elder financial exploitation was added to a federal financial crimes reporting system that links financial institutions with investigators. (The Philadelphia Fed recently established the Consumer Finance Institute, which will continue to investigate elder financial abuse.)

However, clarifying regulations are still needed to encourage and facilitate information sharing between the banks themselves. Lawmakers in Congress and state legislatures should give financial institutions specific permission to delay transactions and report suspicious activity to other institutions. They should also require that all instances of financial fraud and abuse be reported to a national database. This would help the federal government measure the extent and severity of elder financial abuse in the U.S. -- and thus strengthen the urgent nationwide effort to end it.

Patrick T. Harker is the president and chief executive officer of the Federal Reserve Bank of Philadelphia.