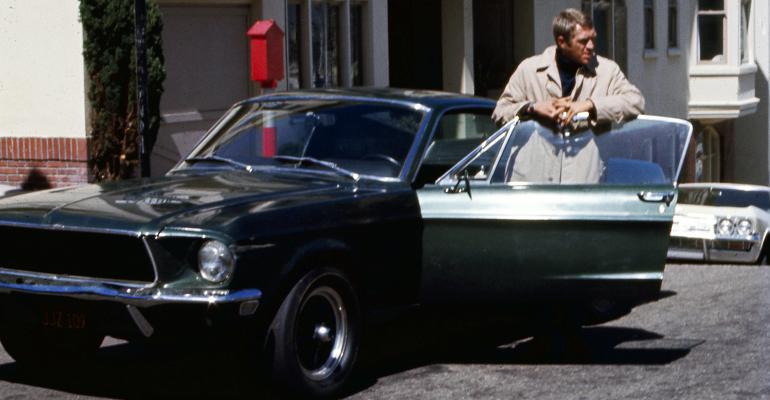 Who says you can’t buy cool?

The 1968 Ford Mustang driven by “The king of cool” Steve McQueen in Bullitt is headed to Mecum’s 2020 Kissimmee auction in January, according to company President and founder Dana Mecum. Once thought lost forever, the Mustang, made indelible by the movie’s iconic chase scene through the hilled streets of San Francisco, was discovered intact (though in need of some serious TLC) in Tennessee a few years back.

Though estimating the value of an iconic car like the Bullitt Mustang can be difficult—it’s impossible to know just how much someone is willing to pay for a car that is both so ingrained in American pop culture and has never been at auction before—Mecum expects the Mustang to surpass the American muscle car record of $3.5M paid for a 1971 Plymouth Hemi Cuda convertible. The highest auction price for a Mustang to date is $2.2M for a 1967 Shelby GT500 Super Snake, so meeting that lofty estimate would entail quite a jump (pun intended).

“There really is no other car to which it can be compared,” says automotive expert and author Colin Comer. “When you put everything together—a cultural icon, connected to a movie legend, and it’s a Mustang—it really stands alone. Then you consider that most people thought it was long gone, destroyed, it was amazing enough when it came out of hiding 18 months ago in near-original condition. Now, for someone to actually have an opportunity to own it for themselves—a car that McQueen couldn't even buy—this is an unprecedented historic event.”

Who says you can’t buy cool?