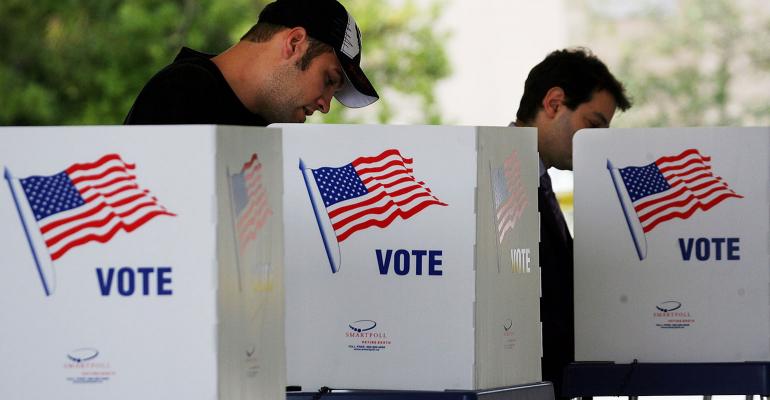 (Bloomberg) -- Voters in as many as four states in November will consider higher levies on their wealthiest residents as income inequality steers liberal activists and politicians toward more progressive taxation.

Colorado and Maine may raise taxes on top earners, while Minnesota is looking to apply the state’s Social Security tax to high incomes to care for senior citizens and people with disabilities. California voters could extend by 12 years a soon-to-expire income-tax increase on the wealthy, while the state’s most populous county, Los Angeles, is eyeing a new tax on millionaires to pay for homeless services.

If the statewide measures appear on ballots in November, more voters will consider higher taxes for the wealthy than in any year since the 1980s, according to Ballotpedia, an online almanac sponsored by the nonprofit Lucy Burns Institute in Wisconsin. The Occupy Wall Street movement and Bernie Sanders’s presidential campaign have brought attention to the widening gap between rich and poor as states and municipalities expect a slowdown in tax collections as the economic recovery cools.

"There is more action in the states because the federal government, particularly the Republicans in the House of Representatives, don’t really care what the people think," said Morris Pearl, a 56-year-old former managing director at Wall Street investment firm BlackRock Inc. who now heads the Patriotic Millionaires, a coalition of wealthy Americans advocating higher taxes on the rich. "In a lot of states, people are realizing that the wealthy are taking advantage of the system."

Nationally, people earning at least $250,000 paid more than 51 percent of income taxes in 2014, while accounting for just 2.7 percent of returns, according to the Pew Research Center. Still, a provision of the federal code that taxes investment income at lower rates than normal earnings, along with reductions in the top income-tax rate since the 1960s, have fed perceptions that the wealthy are gaming the system.

While there’s disagreement as to the causes, studies have shown that income is increasingly concentrated among top earners, with relative declines among the middle class and the poor. The highest-earning 1 percent of households increased their income by about 275 percent after taxes between 1979 and 2007, compared with a gain of about 40 percent for the middle 60 percent of America’s income distribution, according to a 2011 study by the Congressional Budget Office.

Congress in 2013 permanently extended the George W. Bush-era tax cuts for most people while raising the top tax rate to 39.6 percent. The federal rate hasn’t changed since then and efforts to tax the rich more often face opposition from limited-government advocates.

"When politicians want to raise taxes, they always tell people they’re going to raise taxes on someone else: smokers, millionaires, people who drink soda pop," said Grover Norquist, founder of Americans for Tax Reform, which opposes tax increases. "But it always shifts from taxing certain people to taxing as many people as you can. There’s only so much money you can get from the Kennedy family."

Still, the rich have become so rich than an individual taxpayer can sway a state’s finances. Billionaire hedge-fund manager David Tepper last year left New Jersey, which has a top state income tax of 8.97 percent, for Florida, which has no income tax. That led New Jersey tax forecasters to warn in April that his departure might skew their predictions.

Forty-three states tax personal income, according to the nonprofit Tax Foundation. Eight have a flat tax and the others have some form of progressive taxation. California’s rate tops out at 13.3 percent for income above $1 million, the highest in the country and the result of a 2012 ballot measure to erase a budget gap by increasing sales taxes and levies on income above $250,000.

"The wealthiest are already paying the tax," said Jennifer Wonnacott, a spokeswoman for the coalition pushing the California Children’s Education and Health Care Protection Act of 2016. "The need to extend those rates for the wealthiest taxpayers is still very real."

Jon Coupal, president of the Howard Jarvis Taxpayers Association, named for the sponsor of a 1978 ballot measure to limit property-tax increases, said he understands the politics of higher taxes on the wealthy, rather than on property or sales. Still, Coupal said raising income taxes would cause many business owners and entrepreneurs to leave California for states such as Nevada, which has no income tax.

"Nothing is more mobile than rich people and capital," Coupal said. "If you keep piling taxes on top of other taxes, you’ll see people leave."

A Stanford University study in 2014 said evidence of millionaires fleeing is "hard to find." In a telephone interview, Kim Rueben, a senior fellow in the Urban-Brookings Tax Policy Center in Washington, said higher taxes on their own rarely spur people to move, noting that most increases are relatively modest. Tax rates, she said, are one factor among many that influence where the rich live and do business.

Los Angeles County, whose 10 million residents compose a quarter of California’s population, last week requested a change to state law that would allow it to levy a local income tax to augment services for the homeless.

Colorado activists need more than 98,000 signatures by August to put on the November ballot a measure that would add an additional 0.5 percent levy on income of more than $405,000 to the state’s current 4.63 percent flat tax. Minnesota’s legislature is considering a ballot measure to fund long-term care for senior citizens and the disabled by extending Social Security taxes to higher wages. Maine voters will decide the fate of a 3 percent surcharge on income exceeding $200,000 per year, with proceeds earmarked for public schools.

Supporters of a Massachusetts tax increase are aiming for a 2018 ballot measure to expand the current 5.1 percent flat tax by 4 percentage points on income exceeding $1 million. Massachusetts has a convoluted history with the income tax: Measures to replace the flat tax with a graduated rate have been defeated at the ballot five times, while two proposals to eliminate the tax altogether also failed.

The national interest in income inequality, combined with Congress’ unwillingness to raise the federal rate, could make the difference in 2018, said Chuck Collins, the great-grandson of 19th-century meatpacking baron Oscar F. Mayer and a proponent of the Massachusetts initiative.

"Congress is out of alignment with the popular will right now," said Collins, a 56-year-old Boston resident. "The popular will is expressing itself in states."