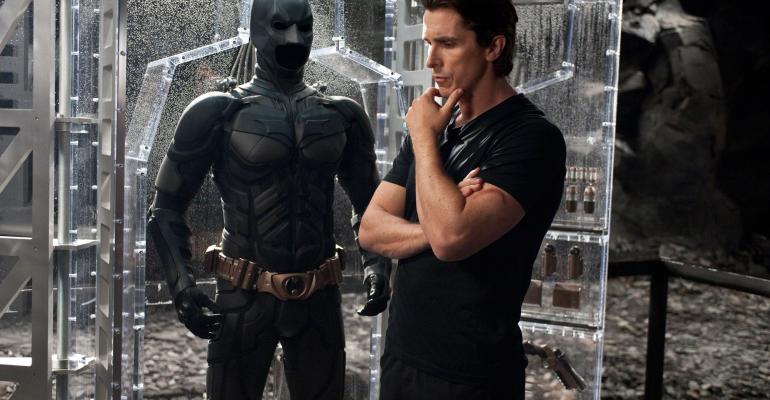 (Bloomberg) -- Someone just bought what could be this year’s most expensive Halloween costume.

A private collector bought a batsuit worn by Christian Bale in “The Dark Knight” and “The Dark Knight Rises” for £192,000 ($250,000). Another bidder snagged the batpod—the heavily armed motorcycle used by Batman as he battled the Joker and Bane in two “Dark Knight” movies—for £312,000. And since crime doesn't pay, Bane’s costume sold for £96,000.

The costume was up for sale as part of an auction organized by The Prop Store, a U.K. memorabilia company. The offering of more than 500 costumes, props and other pieces of movie history brought in more than £1.5 million, auctioneers said.

“We managed to get some world-record prices there, which is very exciting for us,” said Stephen Lane, chief executive officer of the Prop Store. “The activity across the board was pretty unprecedented.”

A TIE fighter helmet from “Star Wars: Episode IV—A New Hope” (the original 1977 film) gavelled in at £210,000, which the store says is a world record. A stunt mask worn by the Sloth character in The Goonies sold for £36,000. These prices include a 20 percent buyer’s premium (the auctioneer’s cut) but don’t include shipping.

In the end, about a dozen people were bidding for the batpod online, over the phone and in person. Bidding opened online earlier in the month, but bids had only gotten up to £35,000 by the morning of the auction, Lane said. It jumped to £180,000 online before the live auction opened and finished up at £260,000, before the buyer’s premium took it to £312,000.

But it’s probably a safe bet that an imposing caped crusader won't be ringing the doorbell to trick-or-treat anytime soon. “These don’t get worn by anybody,” Lane said. “They really end up in glass display cases.”

About 400 bidders from 27 countries actively participated in the auction, which drew interest from investment firms in New York and Hong Kong, archivists working for corporate and private collectors, and museums, company officials said. The pieces up for grabs ranged from full costumes to ID badges, and included annotated scripts, directors’ chairs, prop swords and guns.

A clapperboard—that iconic, black-and-white sign used by filmmakers to sync up audio and visuals—from “Jaws” went for £84,000, while one from “Star Wars: Episode V—The Empire Strikes Back” sold for £33,000.

Not everything from the 500-plus lot sold. A couple of hulking costumes from “Alien Vs. Predator” (2004) that had been estimated to be worth between £20,000 and £60,000 went unclaimed. They’re still available, Lane said.