/sites/all/themes/penton_subtheme_wealthmanagement/images/logos/footer.png
Recent
Recent
Apple Delays Plan to Have Staff in Office Three Days a Week
May 17, 2022
SPAC Deal Tests Investors’ Zeal for Single-Family Rentals
May 17, 2022
Eight Must Reads for the CRE Industry Today (May 17, 2022)
May 16, 2022
Investors, End-Users Compete for Last-Mile Warehouses as Rents Skyrocket
May 16, 2022
Featured
The 10 Best and 10 Worst States in Which to Retire in 2021
Jul 15, 2021
Poll: 15 Classic Books on Investing and the Markets
Apr 03, 2020
Fifteen Must-Listen Business Podcasts for Advisors
Aug 14, 2020
Celebrity Estates: Jay Leno and Planning for Classic Car Collections
Feb 22, 2022
Trump Tax Reform
brought to you by 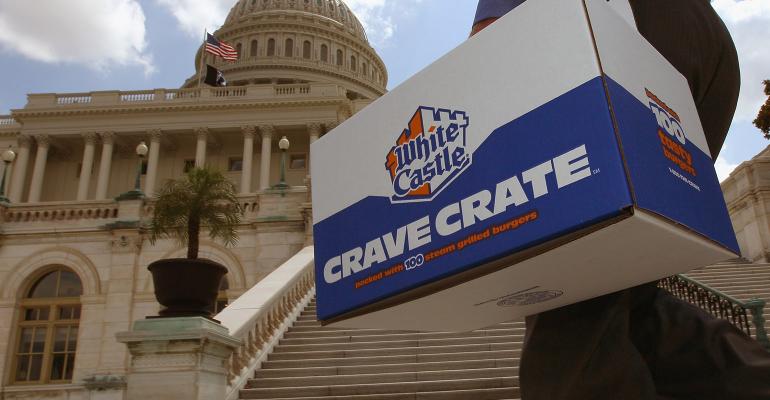 Trump argues estate taxes kill jobs, but only the richest are required to pay. And besides, they’re easily avoided.

Directors of the group, called Family Enterprise USA, include Preston Root. His family fortune derives from creating the curvy green bottle that Coca-Cola made iconic a century ago. Another board member, Jamie Richardson, married into the hamburger business. Specifically: sliders. His wife is the great-granddaughter of the man who founded the White Castle fast-food chain.

Members of the little-known nonprofit, which appeared in a White House email this month, say they represent the people the estate tax hurts most—family-owned businesses that they say are taxed in an unfair and intrusive way.

“No one is opposed to paying their fair share of taxes,” Root said in an interview. The estate tax, however, hits families at the worst possible time, when someone has died. “It's about timing,” he said.

The fate of the estate tax—a debate that has dominated Washington for years—remains unclear less than 48 hours before House Republicans release the text of a planned tax-overhaul bill. Pat Soldano, another Family Enterprise board member, said she thinks the House bill will include a repeal provision—but the Senate may change that.

Regardless, the debate may come back to one central fact: Just two out of every 1,000 Americans who die end up with an estate tax bill. If you’re single and you die with less than $5.49 million to your name, you—or, rather your heirs—don’t have to worry. Couples can shield $10.98 million from the estate tax, and the right planning can shield millions more. The official rate is 40 percent, though IRS data show the effective tax rate is more like 17 percent. Though its repeal has been central to Republican tax philosophy for years, some GOP senators, including Susan Collins of Maine, have expressed skepticism about ending the tax, which brought in $18 billion last year. Keeping it could help offset the deep business and individual income-tax rate cuts Republicans want.

Democrats, meanwhile, are ready to portray an estate-tax repeal as a giveaway to the rich at a time of surging wealth inequality. The top 0.1 percent controlled just 7 percent of U.S. wealth in 1978, according to Emmanuel Saez and Gabriel Zucman, economists at the University of California at Berkeley. By 2012, that group controlled 22 percent of wealth. “If anything, I think we should be strengthening the estate tax,” said New York University professor Lily Batchelder, who worked in former President Barack Obama’s administration. “It’s the most progressive tax we have.”

The Trump administration says the estate tax hurts the economy. In an email this month, it cited research from Family Enterprise USA to say that “close to 20 percent of family business owners say planning for the death tax affects their ability to create jobs.”

Even among that less-than-representative group of business owners, the survey suggests that 80 percent think the estate tax poses no problem for creating jobs. The White House email also cited the survey’s estimate that family business owners spent $74,940 on insurance and $170,800 in planning costs last year because of the estate tax. Those figures were based on responses from fewer than 20 participants.

Richardson, 51, who serves as head of government and shareholder relations at White Castle System in Columbus, Ohio, said the estate tax forces large business owners to spend decades planning for it.

There are some easy ways to avoid it: Give to charity or transfer small amounts of money to the next generation tax-free. Current law allows you to give $14,000 every year to as many different people as you want—and you can also cover anyone’s medical bills and tuition. Many nonprofits worry repeal of the estate tax and other tax changes could reduce the incentives for philanthropy.

For more complicated maneuvers, the rich need the help of professionals, who can recommend trusts, life insurance, and other strategies to minimize estate tax bills. Trusts can serve a double purpose: Shielding assets from the estate tax, while also protecting fortunes from heirs’ divorces, bankruptcies, drug problems, and other issues that can bleed fortunes dry.

The estate tax is due within nine months of death—though there are ways to extend payments over time. Regardless, family-owned businesses worry about coming up with tax payments all at once. Before Root’s mother’s death, the prospect of a large estate tax bill made her afraid to make long-term commitments to charities she cared about, he said.

“If you’re caught unexpectedly by this unfair tax, you likely could lose everything and you would be penalized for a lifetime of hard work,” said the 65-year-old Root, who spends most of his time on the family charitable-giving efforts.

Estate tax opponents say it’s particularly unfair because it taxes wealth twice—once when it’s earned and again when the earner dies.But that’s hardly true. In estates worth more than $100 million, the Federal Reserve estimates, most of the value is in investment gains that have never been taxed. That’s because investors only pay capital-gains taxes when they sell an asset—at a top rate of 23.8 percent for long-term investors. Investors who don’t sell can avoid capital-gains taxes forever. And beyond that, current law holds that when you die, your unrealized capital gains on assets you never sold are simply wiped away. Your heirs start fresh, a process known as “stepped-up basis.” For that reason, the only tax ever paid on such gains is the estate tax.

If Congress repeals the estate tax, it’s unclear whether it would also change the stepped-up basis rules. Trump suggested such a change during his campaign—but that proposal hasn’t reappeared since he took office. If there’s no change, “that would be a huge benefit to very, very rich estates,” said Hunter Blair, a budget analyst at the left-leaning Economic Policy Institute.

Family Enterprise USA would be OK with a change in the basis rules, said Soldano, the former owner of a multi-family office firm who now runs the nonprofit’s operations.

Repealing the estate tax but keeping the current basis rules “doesn’t seem quite fair and costs a lot of money,” she said. The group favors a compromise that would end the estate tax and the stepped-up basis allowance—except for smaller estates that aren’t subject to the estate tax now.

Richardson says ending the tax would help preserve family businesses—which he said can operate more thoughtfully than their publicly traded competitors. For example, White Castle has long offered retirement benefits, profit sharing, and health insurance to its employees, who repay the company with “incredible loyalty,” he said. “We believe there’s a unique benefit that family business models provide.”