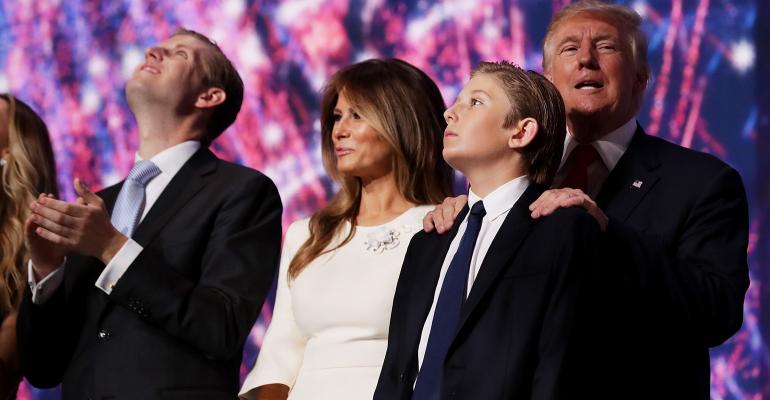 Should Clients Copy Trump and Mix Business With Family?

Here are some of the things that make it worth considering bringing your sons and daughters along in your business.

One of the commitments Donald Trump made upon his election as U.S. President was to put the management of his business holdings in the hands of his adult children. Whatever you might think about the politics of the situation, there are also business implications to the move. Is the next generation of Trumps the best qualified team to take stewardship of those businesses?

Business history is filled with examples of how a new generation handled the family business – Donald Trump himself has been cited as both a positive and negative example of this practice due to differing opinions on how well he has grown the wealth and business interests inherited from his father.

In any case, it is a decision that many entrepreneurs will face at some point. Again, historical results are too split to allow for a universal judgment of whether passing a business down to your children is a good idea, but it helps to be aware of both the pros and the cons, and of what you can do to increase the chances of success.

Arguments in Favor of Family Succession

Here are some of the things that make it worth considering bringing your sons and daughters along in your business:

On the other hand, choosing the next generation of your company’s leadership based on parentage alone can have some drawbacks:

Preparing the Next Generation to Succeed

Certainly, passing on leadership of a business to younger family members can not only be successful, but it can be a step towards building a multi-generational dynasty. Some of America’s largest private companies, such as S.C. Johnson and Koch Industries, have taken this approach. Looking further back into business history, families like the Mellons and the Vanderbilts provide examples where a subsequent generation was able to not only sustain the founder’s success, but expand on it.

However, prominent as those examples of multi-generational success are, they are not the norm. A study in the Harvard Business Review found that just 10 percent of family-owned businesses remain active and still family-owned by the third generation. That is not entirely a commentary on the ability of subsequent generations – the sustainability of the original business model has much to do with it as well – but it does demonstrate the degree of difficulty faced by business founders who envision their heirs thriving with the enterprise after they are gone.

Here are some thoughts on how to increase the chances of success in passing management of a business along to your children:

Involve trusted non-family advisors in these decisions. It is very helpful to have good managers around you who can help evaluate a family member’s abilities from a more objective perspective. Not only will this help you get a more honest assessment of your son’s abilities and work ethic, but it could also start to build a supportive team of key executives who have bought into junior’s rise to the top.

Involving your sons and daughters in your business can be a rewarding experience which helps preserve management continuity, or it can be a disaster that makes the family miserable and incurs the wrath of investors and employees. Making it work requires making sure the heirs you choose are thoroughly prepared, and that you’ve chosen the best person for the job rather than simply the best person whose last name happens to be the same as yours.

Barbara Goodstein is President and CEO of Tiger 21, a peer-to-peer network for the ultra high net worth.