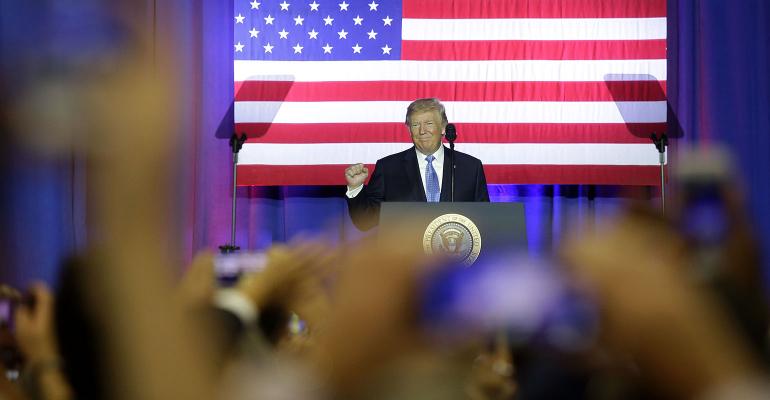 “We say: Plan as you normally would, it’s way too unpredictable."

(Bloomberg) --President Donald Trump’s tax plan suggests that wealthy Americans could be in line for a boatload of breaks. At this point, the rich aren’t buying it.

“Trying to plan is pretty impossible,” said John Anzivino, head of the estate and trust group at Kaufman Rossin in Miami, pointing to hurdles the proposal faces in Congress. “Everybody’s a little taken aback by the blueprint they’re throwing out here.”

Trump’s proposal could be a boon for the top 1 percent of U.S. earners. Elements include capping the rate on pass-through entities at 25 percent, eliminating the alternative-minimum tax and repealing the estate tax. Even so, some advisers to the country’s richest people are skeptical about nuances of the plan, such as cutting the top individual rate to 35 percent while allowing Congress to create a higher bracket for those at the peak of the income scale.

“Wealthy individuals owning partnerships or other pass-throughs may get some partial relief on rates but any such reduced rates are likely to be capped or otherwise limited,” said Lisa Whitcomb, director of wealth strategy at Glenmede.

Another concern is that many details have been left for Congress to hash out, which makes the outcome particularly doubtful given how fractured Washington is.

Owners of enterprises such as hedge funds, private equity or law firms that pay taxes on income passed through their businesses could get a windfall if the top rate is reduced from the current 39.6 percent. The tax framework directs tax-writing committees in Congress to adopt measures to ensure that individuals don’t recharacterize personal wages as business income to take advantage of the lower rate.

Whitcomb said she’s also dubious about the prospects for the estate tax, given the huge cost of the overall proposal.

“Something still has to give and repeal of the estate tax is at the top of the list,” said Whitcomb, whose Philadelphia-based firm manages more than $37 billion for high net-worth individuals, families, foundations and institutional clients.

Even if the estate tax is scrapped, there would be a trade-off. Typically, paying estate tax on an asset results in a so-called step-up in basis, setting a new starting point from which an inheritor calculates appreciation and reducing the capital-gains hit upon a sale. What happens when that tax doesn’t exist is “a huge deal,” said William Kambas, a partner in the private client and tax group at law firm Withers Bergman LLP.

The tax plan also calls for repealing the generation-skipping transfer tax, which is a levy on gifts to grandchildren or later generations.

Some of the wealthiest Americans have spent years lobbying Washington for favorable tax treatment. The new plan appears to grant many of the things they’ve asked for, despite assurances from Trump and Treasury Secretary Steven Mnuchin that they won’t cut taxes for the rich.

Trump’s top economic adviser, Gary Cohn, the former president of Goldman Sachs Group Inc., said at a press conference Thursday that he stayed in the administration despite his anger over its reaction to neo-Nazis because of the chance to rewrite the tax code. “I would never miss this,” he said.

Another question mark for advisers is the fate of some itemized deductions. Elda Di Re, a New York-based partner for private client services at Ernst & Young who works with billionaires, cited concerns for those in markets with high state and local taxes.

“The elimination of itemized deductions is huge,” particularly in areas such as New York City, she said.

The plan calls for the end of most itemized deductions for individuals, without providing specifics, while mortgage interest and charitable giving deductions are preserved. However, the state and local tax deduction, which tends to benefit high-income filers in Democratic states, would be abolished. The move faces some Republican headwinds from lawmakers in districts that use the deduction heavily.

“We say: Plan as you normally would, it’s way too unpredictable. But focus on non-tax issues and preserve flexibility,” Kambas said. Still, he said he’s encouraging wealthy clients not to delay taking deductions “because your income tax rate, and therefore the corresponding value of the deductions, is high right now.”

For now, many advisers are cautious.

The Republican plan “does look like an overall benefit to the wealthy,” according to Kaufman Rossin’s Anzivino. “Is it going to happen? Who knows.”