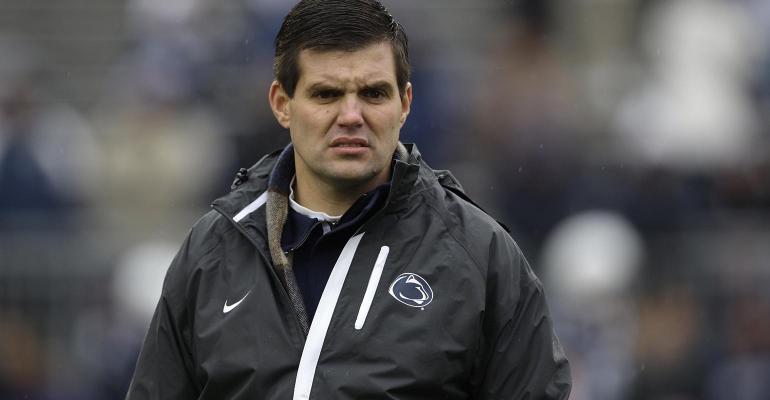 Jay Paterno as an assistant coach for the Penn State Nittany Lions in 2009.
Wealth Planning>High Net Worth

(Bloomberg) -- Wealthy college sports fans across the US are racing to set up organizations that can channel money to student athletes in the wake of a Supreme Court ruling last year letting amateur players receive compensation.

Supporters of Penn State University, including the son of famed coach Joe Paterno, have set up multiple funds, known as collectives. Donors paying as little as a few dollars a month get varying degrees of access to athletes, from online get-togethers to private events, with most of the proceeds going to players.

“If a school does not have a collective with a mission to benefit that school, it’s behind,”said Darren Heitner, a sports attorney in Fort Lauderdale, Florida.

The collectives are part of a wave of change sweeping college athletics since the high court ruling. In all, more than 60 such groups have formed in the past year, according to a tally by the Business of College Sports, and that’s raising concerns at the National Collegiate Athletic Association, which announced new rules last week to limit their activities.

Athletic departments have long courted prospects with top-of-the-line gyms and athletic centers. But so-called NIL collectives (standing for name, image and likeness) pay athletes directly in cash for services, like signing autographs, an unprecedented change for college sports. Offensive linemen on scholarship at the University of Texas at Austin stand to earn as much as $50,000 a year through Horns with Heart, one of that school’s funds. That’s a big lure for an 18-year-old choosing his or her college.

Eager boosters all over the country are forming groups. One collective at the University of Florida has raised over $5 million. Another at the University of Tennessee aims to generate $25 million each year, according to the Athletic. The website reported in March that one student clinched an $8 million deal.

The race has been on since last June, when the Supreme Court made its decision and the NCAA rescinded century-old prohibitions on athletes signing marketing deals. From the outset, the association’s new NIL policy banned using such deals as “inducements” for students to enroll at a particular school. It also required that students perform a service, such as a social media post, in return for pay.

Yet the collectives are already testing the limits with offers to top recruits and transfers, and raising the possibility that donors will get their schools in legal trouble, as so many have in the past through interference in recruiting.

In a bid to rein in the collectives, the NCAA issued new guidance to member schools last week, explicitly barring boosters from talking with recruits and requiring that NIL deals be based on an “independent” analysis of their value.

The statement was “just more of a reminder to everyone of the current NCAA rules that exist regarding booster involvement in the recruiting process,” said Mit Winter, an attorney in Kansas City, Missouri, who specializes in NIL law.

Meanwhile, the push to help college stars cash in continues. In State College, Pennsylvania, a group that includes a local chamber of commerce and tourism board announced in September that they’d created HappyValleyTalent.com, a platform for connecting businesses with student athletes. The group doesn’t actually handle money, however, and instead just provides introductions.

In March, prominent Penn State alums, including Jay Paterno, a former coach, got in contact with Student Athlete NIL, an Atlanta-based company that works with brands, schools and donors. Together, they formed Success With Honor to raise money for players.

Fundraising is simple, according to Mark Toniatti, a longtime Penn State donor and Success With Honor’s chief executive officer: “We talk to individuals we know.”

Fans can give one-time contributions or subscribe for as little as $10 a month. In April, some enjoyed a meet-and-greet with athletes. Cassidy Rushlow, a 20-year-old Penn State gymnast, earned $800 -- $500 to attend a two-hour autograph signing and $300 to promote the event on social media. Before then, she hadn’t partnered with any brands.

“I get a lot of messages about random companies, so I never really know,” said Rushlow, who appreciates that Success With Honor clearly supports Penn State athletes.

The collective’s donor perks scale up based on the contribution. A $500 monthly membership provides direct access to the student athletes via virtual training sessions and custom video messages. The fund has raised more than $1 million already, including $200,000 from subscriptions, according to Jason Belzer, CEO of Student Athlete NIL.

That effort wasn’t enough though for Michael Krentzman, a local businessman and attorney. “Football,” he said, “pays for everything.” Just weeks before Success With Honor launched publicly, the Penn State fan announced his own collective, Nittany Commonwealth, to focus on that sport.

It offers a similar subscription model -- anywhere from $30 a month to $1,000 a month -- and signed its first player, Ji’Ayir Brown, in April. Krentzman said at the some point the group will include other sports like wrestling.

Representatives from both Success With Honor and Nittany Commonwealth said they’ll follow NCAA guidelines and don’t plan to compete against each another.

“Our collective will never call a high school kid,” Krentzman said. “It shouldn’t be the Wild West.”